Welcome to the Holiday Reading Challenge 2013! You too can participate by going to Karin's Book Nook! 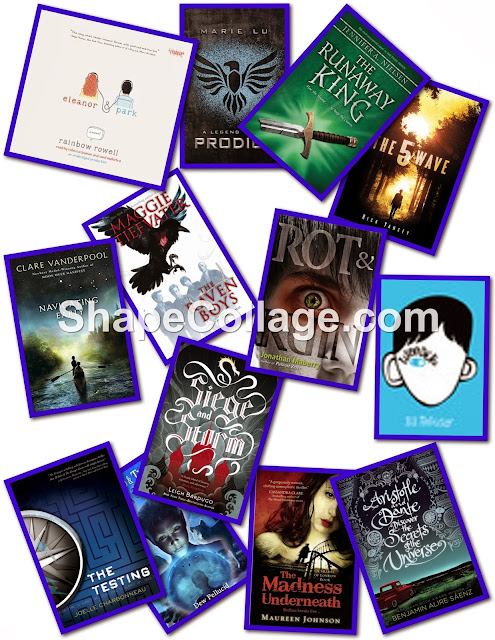 I really enjoyed all of these books - and there were probably another five beyond the top 13 that could really be interchangeable with many of these, but if I were going to rank the top 5, they would be:
#1 - Wonder, by RJ Palacio
#2 - Navigating Early by Clare Vanderpool
#3 - Aristotle & Dante Discover the Secrets of the Universe by Benjamin Alire Saenz
#4 - Siege & Storm by Leigh Bardugo
#5 - Eleanor & Park by Rainbow Rowell

I still have three books to finish before end of year, so I'll be sure and update this list if my mind changes over the rankings!

I used Wordle to create mine, and I used the text from my Goodreads review of Jonathan Maberry's most excellent young adult novel, Rot & Ruin. Cool! 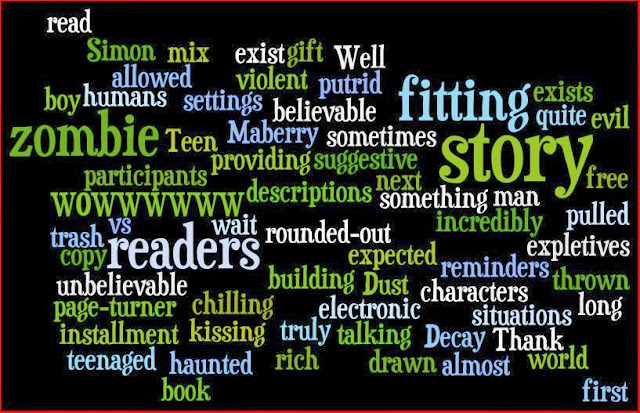 Posted by Kristine at 9:01 AM No comments:

I thought that by going public about how far behind I am on writing book reviews (see post April 9th), I would guilt myself into knocking them out.

Yeah. That was a fail, but in happier news, I've read three more books since then . . . to assuage my guilt, of course. Thoroughly enjoyed:


As always, I'm open to discussing and/or answering questions about any of the books I've read, so let me know if there's a title about which you simply must know my feelings. That would get me cranking again. Yep. That would do it.

I have broken my rule of not starting a new book until I've written-up the review of the one just finished. Umm. . .  I think I have broken this rule eight, er, eighteen -- wait -- twenty-eight times in a row now.  Oops. So my TBR pile isn't "To Be Read;" it's "To Be Reviewed." Yikes.

I'm trying to shame myself into getting my reviews done, so here are book covers of the books for which I need to write reviews. (*NOTE: in all honesty, I'm not promising these will get reviews more than the blurbs already posted on Goodreads. EXCEPTIONS: The Sound and the Echoes, which is gonna be my break-out post and contest, and Thirteen Therapists, which I promised dear Mr. Sanders I would review. Both good ones!)

YA Fiction books. . . (Double-Fine should really go in my next grouping. Dang.) 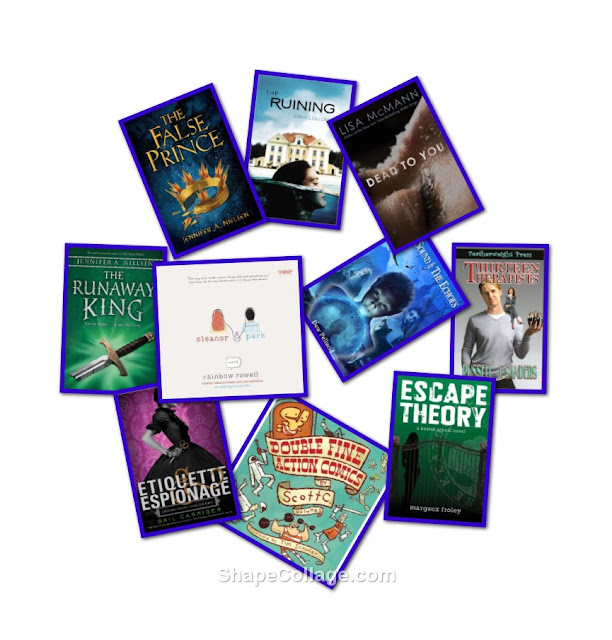 Oh, and a bunch of graphic and illustrated novels . . . 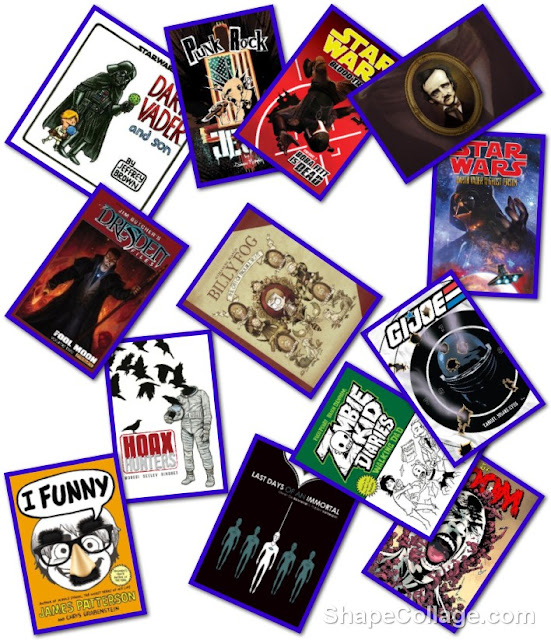 And not to forget the children's picture books I've been reading in preparation for my upcoming gig at an elementary school library. . . 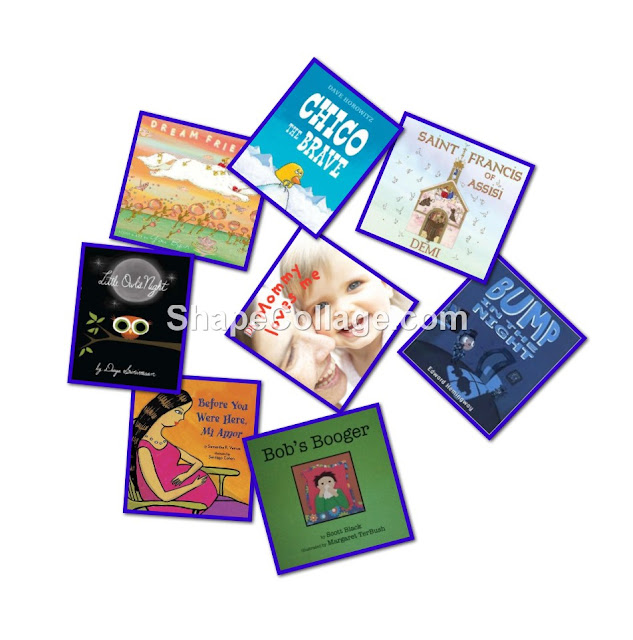 Seriously. How do readaholics like myself also successfully blog? I know it's done, and it's done well all the time, as my Twitter and Facebook follows and feeds will attest.  Do these bloggers sleep? Do they have schedules and flowcharts mapping out their reading and reviewing? And HOW IN THE WORLD do they all manage to have Book Hops, Book Tours, and GIVEAWAYS!! GIVEAWAYS!! And more GIVEAWAYS!!??

Siiigh.  I need an Obi Wan Keblogster to teach me the ways of the Force.  Anyone? :-)

Posted by Kristine at 9:07 PM No comments:

Lizzie Davenport has been reincarnated from Regency Era, England ... but she doesn't know it yet.

Then Drew Carmichael transfers into Lizzie's high school at the beginning of the year, and she feels a connection to him, almost like she knows him. She can't stop thinking about him, but whenever she tries talking with him about the mysteries behind her feelings, he makes it clear that he wants nothing to do with her. Reaching him is even more difficult because she has a boyfriend, Jeremy, who has started to become full of himself after being elected co-captain of the varsity soccer team, and her flirtatious best friend Chelsea starts dating Drew soon after his arrival. So why can't she get him out of her mind?

Even though Lizzie knows she should let go of her fascination with Drew, fighting fate isn't going to be easy.

How far would you go to get revenge?

When Chelsea Givens discovered that her ex-boyfriend Drew dumped her to be with her former best friend Lizzie, she'd never felt so betrayed in her life. Then her new friend Shannon tells her she can help set things right. Chelsea's willing to listen, but what Shannon wants her to believe -- that she shared a past life with Drew -- is impossible. And what she wants her to do to get him back … well, it's downright crazy.

Could Shannon be telling the truth? And if she is, what lengths will Chelsea go if it means making Lizzie pay?

Find out in Vengeance, the second part of the Transcend Time Saga.

IT'S A RACE AGAINST TIME.

In Remembrance, Lizzie and Drew changed the course of fate so they could be together.

In Vengeance, Chelsea set fate back on its original, deadly path.

Now, strange things keep happening to Lizzie. Things that are omens of darkness to come. A curse has doomed her to die an early death, just as she did in her past life. To make matters worse, even if she can figure out who cast the curse, it's irreversible. There's only one option left for her to save herself. It's crazier than anything she's heard yet, and to do it, she'll need Drew and Chelsea's help.

Because to make things right, they must go back to when it all began ... and Lizzie discovers that the final events in her past life were more sinister than she ever imagined.

Timeless, on sale now at:

Ready to get started?  Enter for a chance to win a FREE eBook copy of Remembrance!