DEATH UNDER A FULL MOON 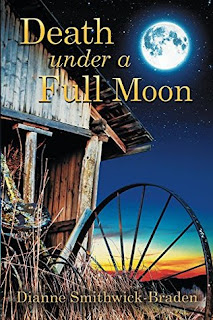 This second installment of the Wilbarger County Series joins Sheriff Wade Adams and Lizzie Fletcher as they investigate murder. Wade and Lizzie attend a dinner party near the small community of Rayland, Texas. One week later, one the guests is murdered.  With his only female deputy out on maternity leave, Sheriff Adams makes a quick decision to deputize Lizzie. That decision proves to be good for the department but damaging to their relationship. The Sheriff and his deputies follow every possible lead to no avail.  Lizzie happens to overhear a conversation that gives them the break they need. With little time to spare, Sheriff Adams and his team rush to prevent yet another death.

HALL WAYS REVIEW: In Death Under A Full Moon, author Dianne Smithwick-Braden returns readers to Wilbarger County, Texas where murder, mystery, and romance are in full swing again.  This second book in the series works just fine as a stand-alone book, but knowing the background stories from book one, Death on Paradise Creek, definitely enriched the reading of book two.

Smithwick-Braden brings back her core characters, but plenty of new, colorful, and memorable ones are added-in to keep readers entertained and guessing about who is the murderer and what might be the motive – there are LOTS of possibilities for both.  Though the story is heavily detective work and investigation oriented, and at times the dialogue gets a bit tedious with suspect interviews,  there are also several sub-plots and side stories thrown in that add variety and breaks from solving the case.  Readers will enjoy the vivid descriptions of the Halloween party (If this is based on a real event, I want an invitation!) and the blue norther that blows in during a baby shower, both scenes in which the Paradise Inn is showcased for a bit.

With book two happening about a year and a half after the events of book one, readers miss seeing the courtship and development of the relationship between Lizzie and Wade. The author does a good job of establishing how close they’ve become and the fondness they have for each other without shoving it in readers’ faces. When their romance has to be put on hold, possibly even ended, it’s sometimes painful to read the scenes where they are working together and have to be nothing but professional. I have to give Lizzie credit for being willing and able to go from equal partner to subordinate employee; I am pretty sure I couldn’t go from waking up in bed with someone to saying ‘Yes Sir’ to him like Lizzie does. I really wanted to see at least a spark fly between them on the job – even a gaze held too long – but they both kept it professional. Dang mature people.

The reviewer at My Book Fix Blog said that the mystery reveal was a Scooby-Do ending, and that is the perfect description for it -- though Smithwick-Braden manages to surprise the readers with her reveal. (Spoiler: It’s not Old Man Smithers!)  The author’s writing style is laid-back, easy to read, and natural, and special spellings allowed for readers to hear the Texas accents in some of the characters’ speech. My review copy was an eProof, so it’s possible it was not the final version, but there were a lot of very basic errors and typos that another editing sweep would easily clean-up.  As it stands, the errors could be a distraction for some readers.

I look forward to the next book in the Wilbarger County Series (there is one, yet untitled!) and what mysteries may unfold there.  Thank you to the author and Lone Star Book Blog Tours for providing me an eBook copy in exchange for my honest opinion – the only kind I give.

Dianne Smithwick-Braden is a native Texas raised in rural Wilbarger County on the family farm. She is a graduate of Vernon High School and West Texas A & M University. She currently resides in Amarillo, Texas with her husband, Richard. She has been a high school science teacher in Amarillo since August of 1990.  Dianne is an avid reader of fiction but murder mysteries are by far her favorite genre. Death under a Full Moon is her second novel and the second installment of the Wilbarger County Series. 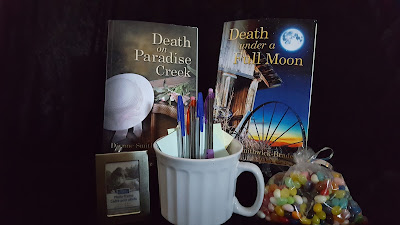 
NOTE FROM KRISTINE at HALL WAYS: The content of this promo post was provided by Lone Star Literary Life Blog Tours.  If you're a Texas blogger interested in joining the ranks of Texas Book Blog Tours, contact Kristine via the Contact Form found at the bottom of the Hall Ways blog.