This book came up for consideration in the high school collection.  I read reviews about it and they ranged from outstanding to trash.  I decided to read it myself - whew. It is definitely for very mature readers. It is all about sex - first sex, straight sex, gay sex, straight having gay sex, three way sex, teen prostitution, sugar daddies, sex for drugs, drugs for sex, mom selling sex with daughter, priest sex, rape, video sex for money, sexual abuse . . . I guess bestiality and incest are the only things that don't happen! The depictions are fairly graphic, some more than others. Many of the scenes are stark and desperate. Most of the 5 main character kids also get hooked on serious drugs (heroine, crack) over the course of their declines from good kids to kids forced to be bad.

The tough thing about this is the main characters are all teenagers (15-17), and at the bottom are the struggles of their lives and most teens: wanting love, acceptance, their own paths away from parents, insecurity. First love that ends up not being first love, deception from those who they trust - young and old, loss. . . And especially since it's graphic and controversial, kids are going to want it! The other Hopkins books are flying off the shelves in this library.  But does the age of the characters make it Young Adult? I am not so sure. And I pray it's not Realistic Fiction, but I'm afraid it is for many young people.

Hopkins' style is excellent. The novel-in-prose is the same as her other stories (some of which I've read - Tricks is quite a bit more graphic) and a very cool, easy-to-read format. The characters are rich and well-developed and you feel like you know them. No problem with the writing, but it's the same as her other novels, so readers can experience that style via another book.

I would say this book is for the mature reader - really, seniors minimum to me. I thought about whether I would want my freshman boy to come across it and read it. Definitely not because I'm pretty sure there are things he would learn that he doesn't need to yet. Ever? :-) I hate when Mom bias comes into play, but shoot, there were scenes that made my ears burn red.
There is only one good role model in the book, and we don't get to know her much. She's a secondary character - maybe even a 3rd level character.  Parents fail their children, church leaders fail their parishoners, and no one seems to make the right choices. I am struggling to see what would be a positive take-away for students who read this. It just was such a dirty book - I mean in the sense of how dirty it made me feel. Not naughty dirty, though there is some of that, just ICK. Does that make sense?

I think this will be one of the biggest struggles for me as a librarian. Putting my personal feelings aside and deciding whether it has some value to someone. I can't stand censorship and of course I support freedom of information, but where do the lines cross between appropriateness and freedom to read what's inappropriate??
Posted by Kristine at 9:57 AM No comments: 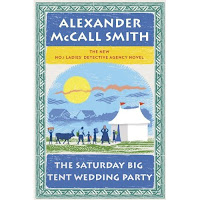 I am a fan of this series, and as always, this was just a fun, safe, clean little escape from reality. This was the 12th installment in the No. 1 Ladies' Detective Agency Series, and where it could get stale by now, it doesn't. This book has plenty of storylines to keep it moving and ends with the marriage of Mma Makutsi and Phuti Radiphuti (this is NOT a spoiler given the title of the book!), which should add some new direction to future installments.

There is just something about McCall Smith's writing style that is so very relaxing to me.  The main character, Precious Ramowatse is my own age and though her country and way of life is far from my own, I feel a connection when she harkens back to and longs for simpler times and a simpler way of life.  Yeah, if that doesn't sound like I'm getting old, I don't know what does!
Posted by Kristine at 8:48 AM No comments:

RANDOM side note. . . it really bugs me that the model's nostril is squished on this cover.

At just fifty pages (and nearly 12 cents/page!), this is a very quick bridge story between Madow's Remembrance and the final installment of the Transcend Time Series, Timeless.

This story changes perspectives from Remembrance and is told from Chelsea's viewpoint, as the best friend scorned.  It is centered around a major event that significantly changes the course of the story for the final book.

Though the writing is pretty fluffy, it's entertaining (and VERY high school drama-ish) and definitely sets the stage and piques interest for how this could all turn-out. The stakes are high because unbeknownst to the players, someone could die as the result of the past lives and the current lives intertwining.

After having Michelle Madow come to my school and talk to the kids, I'm interested in keeping up with this YOUNG, young adult author, who definitely connects with teens and is driven to make it as an author.

Posted by Kristine at 8:32 AM No comments:

Blurb: Lizzie Davenport has been reincarnated from 1815, England... but she doesn't realize it until she meets her soul mate from the past and he triggers her memories to gradually return.
When Drew Carmichael transfers into Lizzie's high school, she feels a connection to him, like she knows him. But he wants nothing to do with her. Reaching Drew is more difficult because she has a boyfriend, Jeremy, who has become full of himself after being elected co-captain of the varsity soccer team, and her flirtatious best friend Chelsea starts dating Drew soon after his arrival. So why can't she get him out of her mind?

Lizzie knows she should let go of her fascination with Drew, but fighting fate isn't easy, and she's determined to unravel the mysteries of the past.
**************************************
Hall Ways Review: Interesting premise and the author made it work. I had expected/hoped for more action around the masquerade dance; though that scene did include a critical/turning point to the story, the dance was a pretty minor part of the story and a bit of a let-down for me. I also would have enjoyed more detail of the past lives, but Madow gave us enough to move the story forward.

This could be a stand alone book, but the bridge book, Vengeance, suggests another level to the plot that could make for some interesting events in the sequel. Looking forward to finding out in book three, Timeless.

If it hadn't been the selection for the book club (Goodreads SHSU Library Science Book Club)I'm in, I probably wouldn't have picked-up a copy to read; after all, sci-fi is not so much my thing, and I am frequently bored by love stories. What a pleasant surprise was this spin-off of the Cinderella story, and I am so glad I read it.

Cinder is smart, strong, and independent, and though she does make some poor decisions (she is sixteen, after all), she deals with the consequences with level-headedness -- and a healthy dose of sarcasm!

The characters are well-defined, and as in the original version, you loathe the step-mother and step-sister. Cinder goes a step farther and adds in an evil queen to hate, too.   I liked that all adults weren't characterized as idiots, as is typical of many dystopian / strong teen protagonist novels. That same old storyline gets old fast.

The author did a pretty good job of making the reader have questions and then answering them later. And, it had a nice little twist or two.  The book ended in absolute chaos and so can't be a stand alone novel, so don't start it if you're not in for the long haul.  I really am looking forward to the next installment of The Lunar Chronicles.


See the book trailer for Cinder
Posted by Kristine at 5:15 PM No comments: