I listened to this book on my iPad, through the Overdrive App.  Here's a sample of the audiobook, courtesy of scholastic audiobook:

The narrator did a good job with this book, convincingly changing his voice between the main character, a teenage boy, and grandpa, dad, man, girl, woman, child, and foreigner.  It worked and didn't seem awkward.

The setting in this story isn't new - Stephen King did it best in The Stand some years ago - but it's current times, and humanity has nearly been wiped out by its own hand.  In The Eleventh Plague, it is germ warfare that has done the destruction, and what was once America is now just a shell of abandoned and decaying storefronts, homes, and cars.  We are fifteen plus years out from when it all started.

I definitely enjoy books with this premise, in part because it seems so plausible and it's interesting and a little scary to think about what the aftermath would be like for survivors.  Why I like this storyline is because the main character, Stephen, wasn't alive before P11 (the plague that kills everyone) and doesn't know American life.  He only knows stories of it, passed on from his grandfather and parents.

Hirsch did a good job of describing the absolute desolation of life with his father and grandfather, and the awesomeness of coming across a colony of people that has managed to rebuild some of the old life.  The characters are well-written and believable, and they go just deep enough that we get many perspectives on P11, values, and life in a post-apocalyptic world.
Here's the book trailer from Jeff Hirsch's website:
Posted by Kristine at 11:22 AM No comments: 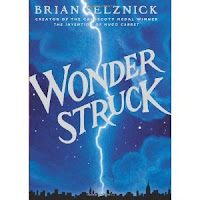 
Amazingly, there were even more drawings in Wonderstruck than in The Invention of Hugo Cabret! The book has an equally spectacular mix of drawings and writing to carry forward a dual storyline, one set in 1927 and the other set in 1977.

The two seemingly separate stories, placed many years apart, weave and parallel each other and end-up coming together in a very satisfying way. In The Invention of Hugo Cabret, I really studied many of the drawings because they were so elaborate and had much to say, whereas in Wonderstruck,  I flipped quickly through more quickly because they were more focused on a single subject. The wolves, for example, are illustrated in a sequence of drawings that keep zooming in closer and closer, until you are looking very closely into its wild eye.  The level of detail is incredible -- every space on the page is taken.

Loved this book and will keep it on my shelf for my granny days.

Scholastic has a great website dedicated to Wonderstruck where you can see some of the fabulous illustrations from the book (those WOLVES!!) and learn all kinds of things about the book.  Here is their video with Selznick talking about it. Enjoy!

I gave this 3 out of 5 stars on Goodreads.

I really wish I had written about this right after I finished reading it because I know I had so much to say about this book.

First, my impression five weeks, several books, and six hours of grad school later, is that this was a GOOD book.  It was poignant, painful, infuriating, funny. . .  I wanted to shake Ever by the shoulders and tell her to wake-up and see who she really is in the mirror instead of judging herself by her outward appearance.  Ever is her own worst enemy, and even as she battles her weight, it's the weight of her own beliefs and assumptions that truly weigh her down and repel the people who want to love her.

I am not so naive or so old that I don't know or remember what it was like in high school; I understand how cruel people can be to the less than perfect, regardless of how smart or talented or funny they are. Cooner did an outstanding job of describing this scene, though if anything, it wasn't as bad as the reality would be.  Cooner also did an outstanding job of keeping the reader on an emotional see-saw.  Ever would triumph, Ever would fail. Ever would succeed, Ever would undermine her own success.

Though I have never been obese, like most females will over the course of their life, I have struggled with my weight, and I have felt the comfort (and hidden it from everyone else) of a bag of M&Ms.  There was so much in this story to which any female could relate.

OF NOTE: I did not picture Ever looking anything like the girl on this cover. bleh.

Posted by Kristine at 9:54 AM No comments:

For fans of Cinder, (that would include me!), this is a nice little prequel that gives some insight about how she came into her adopted family.  It also gives more information about her adoptive father and their short-lived relationship, which I enjoyed.  I wanted to learn enough to feel some sympathy for the adoptive mother, but it appears she was never an overly benevolent woman.  Guess it wouldn't be as much a Cinderella story without her being a witch.

The prequel is very short (20 pages?), very quick, but good background and probably should have just been a prologue in Cinder. On the other hand, nothing is given to us that is overly important.  No game changers, just interesting details.

Click here for Review of Cinder.
Posted by Kristine at 9:33 AM No comments: