The illustrations are done in black and white with eye-catching splashes of red that kids will love -- and the main characters are adorable. Plus, with chapter titles like "Smelly Brother Funk . . . Eww," kids will be giggling their way all the way through the short, engaging chapters.  An added element of fun is reading about the authors and the illustrator.

Thank you to eBooks For Review for providing me a free copy of this book in exchange for my honest review -- the only kind I give.


Click here to buy this and other books
in the Ellie + Ace series.

Posted by Kristine at 9:30 AM No comments:


The prologue of this YA paranormal story grabs readers and pulls them back in time to a small town in the Philippines, 1881. Thieves have been caught and are shown no mercy and put to death in a torturous way. One young village boy tries to save them, and in doing so, saves himself but not his town from the curse of the langbuan. Starting that very night and every Ghost Moon Night after, the evil winged spirits of the dead rise and kill the villagers by clinging to them until the langbuan have drawn all the warmth from the victims' bodies.  SUPER creepy. I am not surprised that Jewel Allen, the author, won a first chapter contest with this story.

From there, the story jumps forward to the same village in 1956, still cursed but accepting the monthly Ghost Moon Night as the norm.  They have a new parish priest, Father Sebastien, who wasn't told about the town's curse ahead of time, and is quite shocked to hear about the langbuan from Antonio Pulido, the seventeen-year-old main character of the story.  Father Sebastien decides it's his mission to get the villagers to stop putting their faith in pagan rituals, but instead in God, and to figure out how to break the curse. He befriends and confides in Antonio, who has great respect for the priest.

Ghost Moon Night is definitely a coming of age story for Antonio, though he deals with a great deal more than does your average teen -- and that's without factoring in his encounters with the langbuan, which are intense! Antonio is a complex character who really grows by making mistakes and learning from them. His relationship with his father is particularly complicated and often painful, even more so as Antonio discovers his father's many secrets. What is most revealing about Antonio's character is his love for his grandfather and what he's willing to do for him.

Allen's writing is beautiful and descriptive, and her passages really bring the setting of a small village in the Philippines to life.  She uses a lot of Tagalog words, which mostly can be defined by context, but also there is a glossary at the end of the book that lists all the words (which I didn't find until I finished -- would be great to have a heads-up at the beginning). There were a few scenes that were confusing to me and which I didn't feel moved the story forward (ex. nuno sa punso, cleaning the morgue). They seemed out of place or in need of more explanation as to how they were connected. Also, the action slowed down significantly through the middle of the story and got a bit bogged down with some unnecessary details; however, the last third of the book had some great, unexpected twists as well as some pretty intense and scary langbuan encounters, which forgave the parts that dragged.

Ghost Moon Night will leave readers thinking about more than just its flying zombies -- there are many deeper messages.  There is no profanity or sexual situations, but there are death and grief, references to domestic abuse and alcoholism, and violence, though it is not overly graphic. As such, I would recommend this book for upper middle grade or young adult readers.

This book was provided to me by eBooks for Review in exchange for my honest review -- the only kind I give.
Posted by Kristine at 9:30 AM 2 comments:


At just forty-one years old, Neil Patrick Harris (NPH) has already lived an amazing and awe-inspiring life. If he continues at this pace, I hope we can look forward to a sequel memoir that covers the next forty years! There is certainly no indication that he plans to slow down or get any less interesting as he transitions into fatherhood and new opportunities in the acting world.

Click here to see Crown Publishing's book trailer featuring, you guessed it, NPH! It will give you a nice idea of what you're in for.

Rule follower that I am, I read this through the first time following the intended (or was it?) "choose your own story" format. I was finished quickly and definitely wanted more, so I read the whole book in order and found it much more satisfying. Admittedly, I wasn't riveted so much that I couldn't put it down, but I think that also was a plus. Each chapter was an amusing little piece of NPH's life -- or a complete creative lie -- and I could read a chapter or two and have a few giggles and then not return to the book for several days, without missing a beat.

I have seen a few episodes of How I Met Your Mother, but other than that, I am not sure I have ever seen NPH perform. Nonetheless, my impression of him has always been that he's funny, talented (his character on HIMYM was brilliantly acted), and that he is really a good guy. All this comes through in his memoir, but what is most refreshing is that he is grateful. His gratitude shines again and again, and I love that he fully credits the people in his life who have sacrificed and boosted him so that he could attain what he has attained.

Readers will be treated to NPH's magic tricks, cocktail recipes, sex, lies, and videotapes (see Penn Teller chapter) all shared with humor and straight from the heart.  It is definitely an adult book given Harris's honesty about sex and drugs, but it's probably okay for mature young adults and could be helpful/hopeful/inspirational to those struggling with their sexuality -- NPH even gives a couple of shoutouts to Dan Savage and the It Gets Better campaign, and how it impacted Harris.

I received a free print copy of this book from Blogging For Books in exchange for my honest review -- the only kind I give.

Click here to buy this book from the publisher or to learn more about the author.

Posted by Kristine at 2:52 PM No comments:

NOTE: Sadly, my audio review copy didn't include the PDF of art and illustrations, so I am reviewing solely on the audiobook content. This is a very quick listen at just four hours playing on normal speed.

In Homeroom Diaries, authors James Patterson and Lisa Papademetriou cover some heavy material in the very believable voice of main character, Maggie Clarke. It's junior year of high school, and Maggie "Cuckoo" Clarke has chosen optimism as her modus operandi. It doesn't matter that she had a mental breakdown after her mother abandoned her (hence the nickname, Cuckoo), that the school counselor anxiously and almost enthusiastically awaits a relapse, that she and her "Freak Show" friends are bullied by the school's haters, or that even those who seem to have it together are teetering on the edge. Oh, and she may have a crush on her teacher and the feeling might be mutual.  Despite the odds, Cuckoo and the Freak Show friends will choose happiness for not only themselves, but for the entire school -- come hell or high water.

"Even trees go through sad times, but then they burst back to life. That will be me. THAT will be me." Cuckoo Clarke, as she prefers to be called, is an amazing narrator. (And on that note, Lauren Fortgang does an excellent job of reading, though as is often the case, her male voices sound a lot like Rudolph with his fake nose on his face.)  Through Cuck's diary entries, readers are taken straight into the battlefields of high school, where even the teachers and school staff can be the enemy.  Cuckoo navigates it all and strives to accept herself, faults and all, embracing what makes her unique, in part because she has the support of an incredible foster mother, Mrs. Morris. Patterson & Papademetriou quickly establish the deep love and respect between Cuckoo and Mrs. Morris, setting the stage for even more heartache.

There are definitely a few parts that are unrealistic -- two quick examples are a seventeen-year-old protégé being hired as a high school teacher and a student who attempted suicide being right back in school just days later -- but the writing is vivid ("Marjorie's car is a vintage Buick and it still smells like an old man.") and the messages are powerful. Cuckoo Clarke reminds readers that the bad doesn't have to define who you are, and that happiness -- even if you have to rewrite endings to find it -- is a life choice.

This book was reviewed for Readers' Favorite, who provided me a free CD audiobook in exchange for my honest review -- the only kind I give. 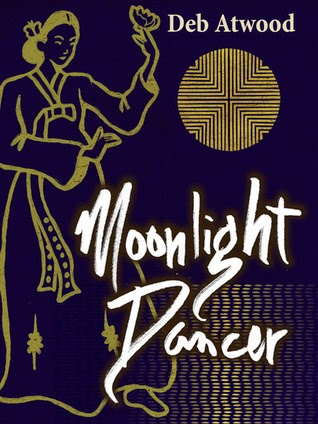 In Moonlight Dancer, Deb Atwood creates an irresistible mix of romance, mystery, and mysticism which will keep readers turning pages.  On a trip to an antique shop, Kendra JinJu MacGregor is drawn to an old Korean doll, only to find purchasing it cost prohibitive. When Kendra can't help returning and spending all her living and college tuition money to purchase the doll, it is only the beginning of the high price she ultimately pays for bringing it into her life.  Once Kendra has the doll, which Kendra names NanJu, at home, strange things immediately begin happening, leading Kendra back to the shop for answers from the sexy and mysterious salesman Hiro Peretti. The magnetism between Hiro and Kendra is immediate, and though each has secrets that keep them apart, it is NanJu that creates the biggest barrier. Soon NanJu, who is really the ghost of a sixteenth century Korean shaman, is asserting full control, with a plan to carry Kendra into the ancient world of Korea to soothe and release NanJu’s tortured, restless spirit. Kendra’s actions are not her own, the stakes are high, and having pushed Hiro out of her life, will Kendra be able to survive the past on her own to return to the present?

Moonlight Dancer is told from several viewpoints, including NanJu’s, which is told in a series of not always sequential flashbacks. The writing is beautifully done, and Deb Atwood clearly has a gift for description that is truly lyrical, shining especially in the chapters with NanJu as narrator. Readers will feel transported into ancient Korea and will experience NanJu’s trials and tribulations as if sitting on her shoulder. The inclusion of tidbits of Korean traditions, conditions, and history provided for a very rich reading experience.  Kendra’s and Hiro’s chapters were less lyrical but certainly helpful in defining their characters and moving the story forward; however, readers will need to be willing to suspend their disbelief in order to accept how their relationship unfolds and how realistic are the conditions.  Kendra never shakes the damsel-in-distress persona, nor Hiro the hero, but perhaps that makes them a perfect match. Moonlight Dancer will appeal to fans of New Adult – though the sex scenes are mild – who enjoy the mysteries of the past woven in with some insta-lust of the present.

This book was reviewed for Readers' Favorite, who provided me a free eBook in exchange for my honest review -- the only kind I give.
Posted by Kristine at 4:24 PM No comments: