Important topic and message, especially since it hadn't occurred to me that people -- kids -- would play a game of choking each other until they pass out. Sometimes my blinders get the best of me and don't permit me to think such things happen in the real world.

In any case, the story was good, but it really was written a bit too simply for the main character to be an eighth grader.  It is written for ages 8-12, so I guess it was spot-on for the writing level. . . and I suppose that readers in that range will think it's cool to have the main character be an eighth grader. There needs to be another version, bumped by a couple of years, so that teenagers are the audience.

The message is strong and clear about trusting your instincts, being yourself, honoring yourself and your friendships.  I liked, too, that consequences of bad decisions were shown and not sugar-coated.  Any girl struggling with wanting to belong to the popular crowd or just wanting to belong somewhere would benefit from reading this story.
Posted by Kristine at 9:08 PM No comments:

Daughter of Smoke and Bone 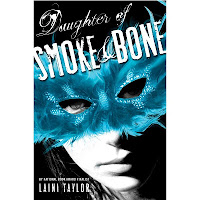 I probably would have given this a 4 out of 5 stars (I gave it 3) if I had read the book instead of listened to it. Though the narrator did a good job, it was just painfully slow to listen to this pretty long story.  I think it is a page turner if you read it, but I got a little bored because it took too long! And when I listened with headphones (on the plane, in bed), I usually fell asleep and then had to go back and listen to what I missed.

That aside, the story is interesting though it required me to suspend my disbelief a bit more than I am comfortable suspending.  The angels/demons among us premise is fine, but that so much happens with human observation (and no consequences) was tough to swallow.

The main character, Karou, is very mature at seventeen, living on her own for some time and already through a serious and mature, semi-live-in relationship with an older man.  That made her a pretty cool character, who would appeal to teenage girls, but it also pushed the book age appropriateness level a little higher (16 and up?) The book is fantasy on many levels. I love that Karou lives by the mantra of telling the truth. Her truth is so outlandish, no one believes her anyhow, but then she doesn't have to track the lies she tells!

The characters were well-done, and the cliffhanger ending just may be enough for me to READ the next installment, Days of Blood and Starlight, due out November of 2012. Below is the book trailer and you can read about both books on the author's website http://daughterofsmokeandbone.com/

NEW 09/13/12: CLICK HERE TO PREVIEW THE FIRST THREE CHAPTERS OF THE SEQUEL, Days of Blood and Starlight.
Posted by Kristine at 8:10 PM No comments: