The seemingly never-ending Cabinda War (1975—) has left multitudes dead in its wake and thousands of children homeless and orphaned.

Jackaleena N’denga, a young Angolan girl, has become the sole survivor of one specifically brutal village massacre carried out by a band of guerrilla boy-soldiers.
Jackaleena’s resilience leads her to an orphanage on the west coast of Africa, known as Benguela by the Sea, where she and other children are taken in and protected. Her brilliant mind and endless questions capture the heart of her mentor, Margaret, who ensures her that her survival thus far—especially being the survivor from her village—must mean she has big things ahead of her. When the opportunity arises, she must find her purpose.
Not without a plan, Jackaleena stows away on a mercy ship that has made its yearly visit to the orphanage and is now preparing to return to America. Her journey takes her across the ocean, into the arms of New York City's customs officials, and finally into placement in a temporary foster home in Texas.
Enter Alfie Carter—a workaholic, small-town detective who is also battling memories of his past. His life is forever changed when he meets a young African girl looking for her higher purpose. 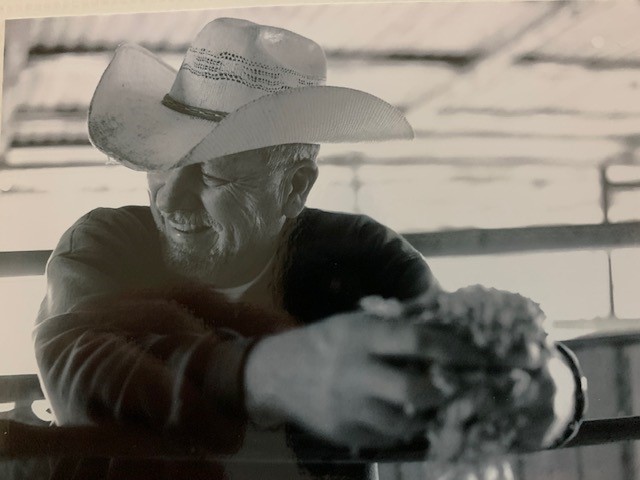 BJ Mayo was born in an oil field town in Texas. He spent the first few years of his life living in a company field camp twenty-five miles from the closest town. His career in the energy industry took him to various points in Texas, New Mexico, Colorado, Utah, Louisiana, Bangladesh, Australia, and Angola West Africa. He and his wife were high school sweethearts and have been married for forty-six years with two grown children. They live on a working farm near San Angelo, Texas.
Visit BJ Mayo at his website: https://bjmayo.com/

THREE WINNERS each receive an autographed copy of ALFIE CARTER. 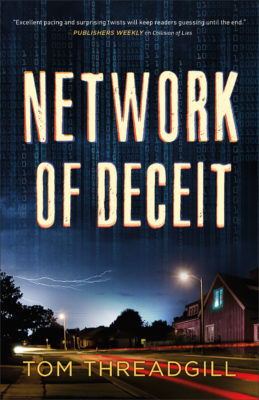 She's following her instincts. They're following her every move.
After her rescue of nearly fifty kidnapped children made international headlines, Amara Alvarez gets what she's worked for: a transfer to San Antonio's Homicide Division. But reality sets in quickly when her first case, the suspicious death of a teenager at a crowded local water park, plunges her life into chaos.
As the investigation moves forward, Amara finds herself stalked online by cybercriminals who uncover her personal life in frightening detail. With few leads, she's forced to resort to unconventional methods to find the killer and prevent her first murder investigation from ending up in the cold case files.
Tom Threadgill is back with another riveting page-turner featuring the detective who is willing to put everything on the line to see justice served and lives protected.
CLICK TO PURCHASE!
│ Amazon│ Barnes and Noble │Books-a-Million │
│ Kobo│ IndieBound│
│ Christianbook.com│

Get some insight into Detective Amara Alvarez of
Network of Deceit through these Notable Quotables. 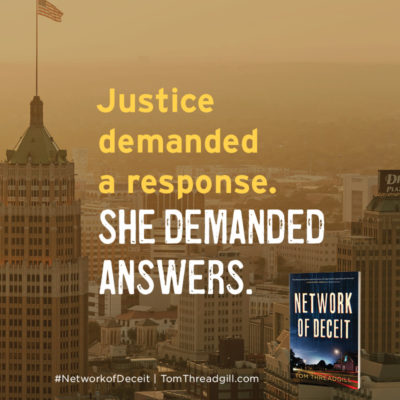 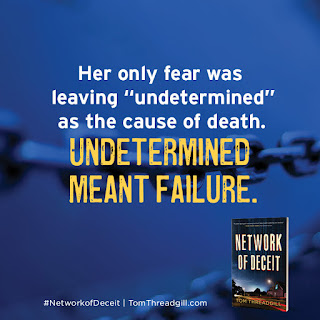 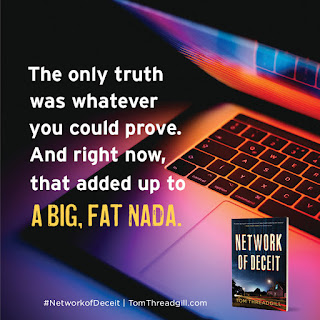 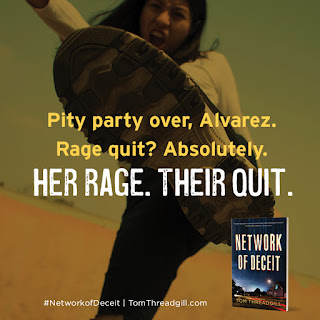 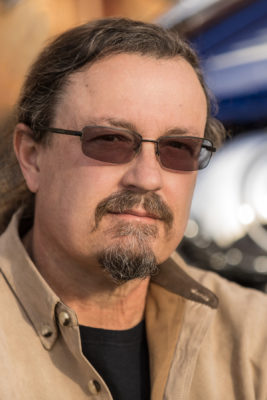 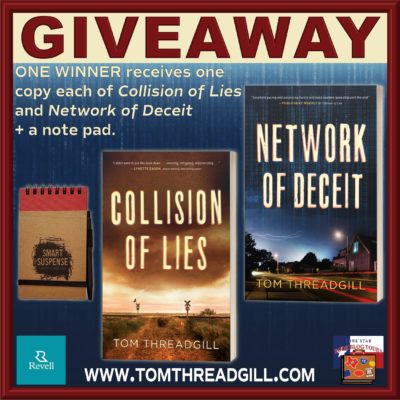 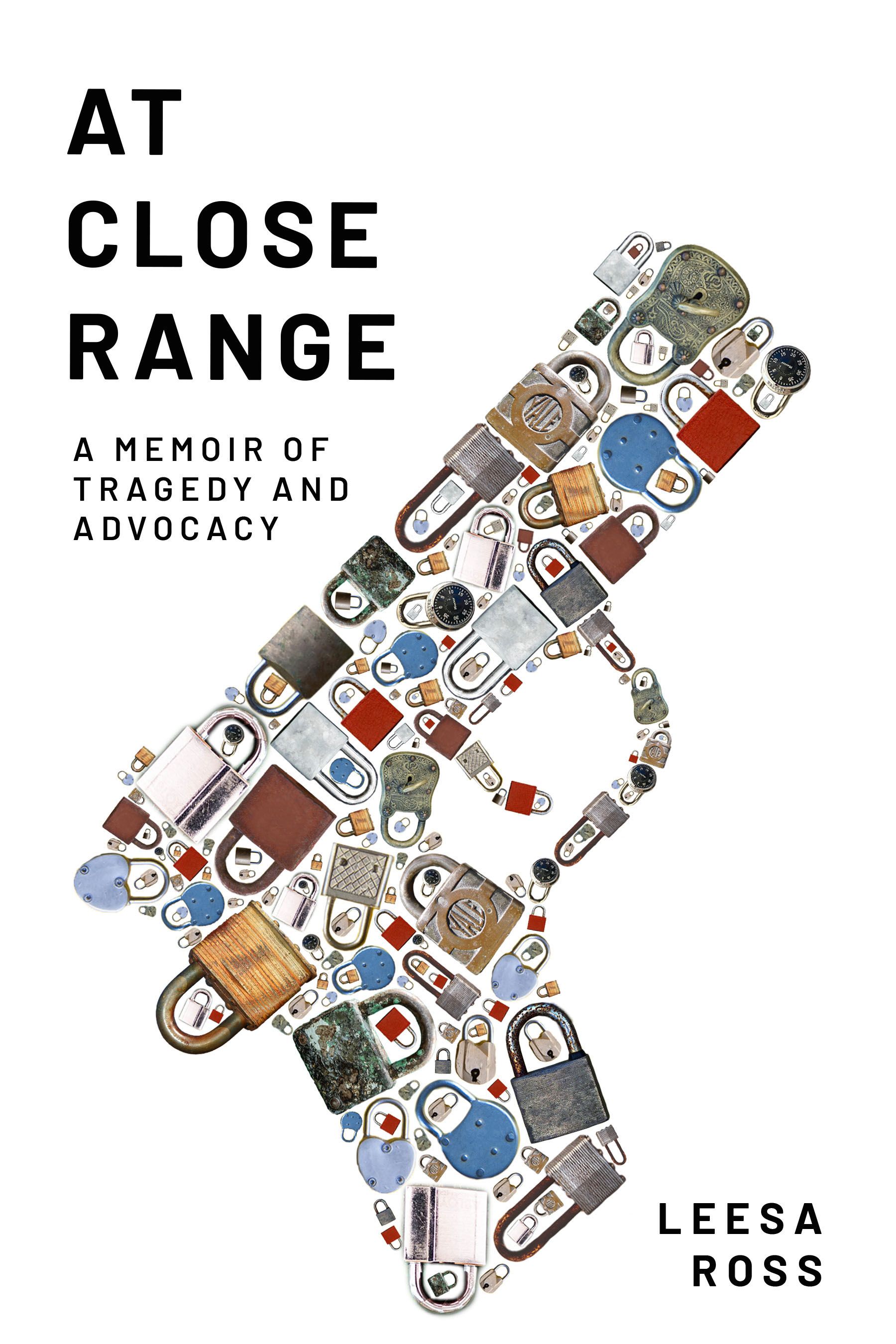 Leesa Ross did not expect to write a book. Neither did she expect the tragedy that her family endured, a horrific and sudden death that led her to write At Close Range. Her debut memoir is the story of what happened after her son Jon died in a freak gun accident at a party. Ross unsparingly shares the complexities of grief as it ripples through the generations of her family, then chronicles how the loss of Jon has sparked a new life for her as a prominent advocate for gun safety.  Before the accident, Ross never had a motivation to consider the role that guns played in her life. Now, she revisits ways in which guns became a part of everyday life for her three sons and their friends.
Ross’s attitude towards guns is thorny. She has collectors and hunters in her family. To balance her advocacy, she joined both Moms Demand Action and the NRA. Through At Close Range, the national conversation about gun control plays out in one family’s catalyzing moment and its aftermath. However, At Close Range ultimately shows one mother’s effort to create meaning from tragedy and find a universally reasonable position and focal point: gun safety and responsible ownership.

HALL WAYS BLOG: REVIEW: So much pain. So many questions. So little forgiveness. In At Close Range, Leesa Ross takes readers along on the horrendous journey that no parent should ever have to take, but one which too many have, and must continue to take: the death of a child by gunshot wound.  In her open and bluntly honest memoir, Ross’s grief is palpable, her desperation washing over the reader.

Perhaps it’s inappropriate given the topic of the book, but I’m going to go there and point out that it was the cover of At Close Range that sold me on reading it. The jacket design is eye-catching and alluring, even to someone like me who doesn’t own a gun, doesn’t like guns, wouldn’t care if they were all wiped from the planet. (I know, I’m a native Texan and I said that out loud.) However, I’m realistic and know that guns aren’t going anywhere, and the simple message of the two items on that cover – a gun + lots of padlocks – indicated a story I might be okay reading.

I think most mothers would say they’ve allowed the “what if” thoughts of losing a child to enter their minds, and for me, those dark thoughts are usually sparked by empathy and learning of someone who has lost a child. I don’t want to think about the unthinkable, but when I encounter someone suffering that loss, I can’t help it.  Until I read Leesa’s story, I had only thought broadly about gun safety in terms of laws that need to be made and enforced to prevent mass shootings. Like Leesa:

“I never thought to have the new version of The Talk. The one about handguns.”

While there are plenty of things I couldn’t relate to in Ross’s very personal story, I’m a mom, and I’m a mom with my youngest son the same age now as when Leesa’s son, Jon, died. Instant connections. By walking side-by-side as Leesa tries to reconcile something that’s unreconcilable, the reader can’t help but imagine being in her shoes. We never had “The Talk” about handguns with our kids. We don’t own guns, so no need, right? Wrong. All my kids, from ages 23-31, will now have to tolerate another Memo from Mom. It’ll probably be one of those things I preface with telling them I am sure that they know better BUT it’s other people’s actions I worry about. And I’m a grandmother now, so you can bet that I’ll be teaching and preaching to my sweet grandbaby every chance I get.

“Mom, it’s not the gun that killed Jon.”

What’s particularly interesting about Leesa is that after the tragedy that struck her own family, she’s not anti-gun. And neither are her other children; in fact, her second son became a gun collector and very calmly would remind his mom that the gun wasn’t the problem; that it was loaded, and the owner was careless, and Jon was naïve (complacent?) about guns were the problems. This line of thinking is difficult for me, but through those candid conversations within the Ross family, I’ve expanded my understanding about gun lovers and maybe even become a bit more open-minded.

“We have hundreds of pages of safety rules for stepladders, I learned.”

The majority of At Close Range is Leesa’s grief journey, and at times, the hops around the timeline were a little confusing and sometimes repetitious – feeling more like a personal journal than a published memoir. Through every stage of her grief, there’s a constant thread, an almost obsessive compulsion, of the author to find answers about the exact circumstances of Jon’s death. (I know I would have the same obsession.) She often refers to channeling her inner Nancy Drew, and she finds strength and confidence in that role. In her quest to find answers, she ultimately turns her despair into a mission to save lives.

Regrettably, Leesa’s foray into being a gun safety advocate doesn’t get much page time. The gaps in that part of her journey leave me a little unsatisfied. I not only want to know more about getting to the point where Lock Arms for Life was born, I also need a little more time to come out of the fog of despair, to absorb Leesa’s finding her purpose, and to feel hopeful that Leesa’s organization can effect change. Perhaps there’s another book in the works that explores those elements, or perhaps we’re supposed to still ache a bit when we close the cover. After all, it’s not a happy ending. 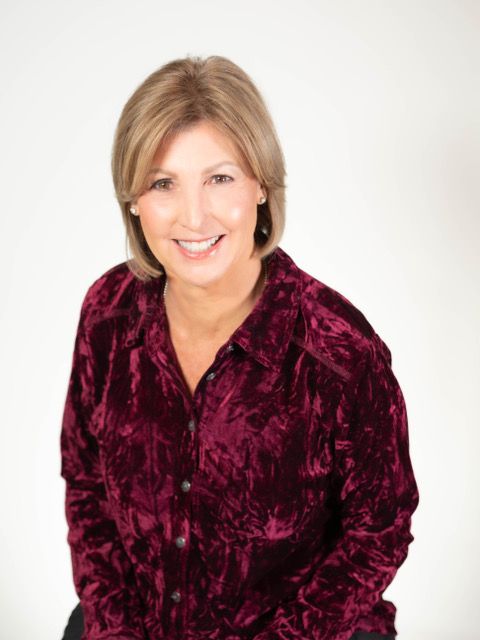 Leesa Ross is a debut author who’s transformed a tragedy into a mission for safety. After losing a son to a shooting accident, she formed Lock Arms for Life, an educational organization teaching gun safety. A Texas mother of three, she leads Lock Arms, sits on the board of Texas Gun Sense, and belongs to the NRA.
Facebook | Twitter | Goodreads

FIVE WINNERS each get a hardcover copy of At Close Range. 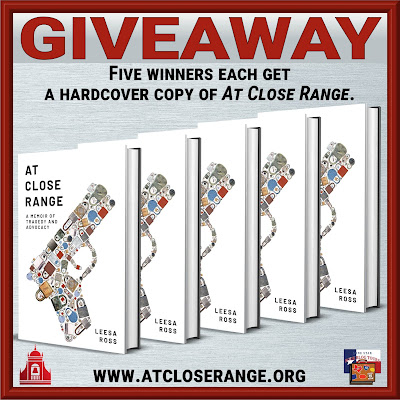 FOR DIRECT LINKS TO EACH POST ON THIS TOUR, UPDATED DAILY,

or visit the blogs directly: