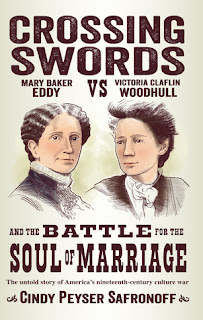 Safronoff, C.P. (2015). Crossing Swords: Mary Baker Eddy vs Victoria Claflin Woodhull and the Battle for the Soul of Marriage. Seattle: This One Thing.


In Crossing Swords: Mary Baker Eddy vs. Victoria Claflin Woodhull and the Battle for the Soul of Marriage, Cindy Peyser Safronoff presents readers with a comparative biography that looks into the lives of two women who were highly influential in the feminist movement during the latter half of the 1800s.  One, Mary Baker Eddy was a defender of Christian/Puritan values and the sanctity of marriage, yet she saw need and opportunity for improvement in women’s rights. The other, Victoria Claflin Woodhull, was more radical in her approach to seeking equality for women and was a strong proponent of ‘free-love’ and the ability for women to remove themselves without consequence from the bonds of marriage.  Though the two never met, together – with other feminist leaders like Susan B. Anthony, Mary Livermore, and Lucy Stone - they voiced the concerns of all women in finding equal footing in all areas of civilization including laws dictating politics, marriage, and even religion.  Author Safronoff digs deep into the past to reveal amazing parallels to modern day discussions about many of the same issues that existed over a hundred years ago.

Despite the title implying otherwise, there is never a real clash between Mary Baker Eddy and Victoria Claflin Woodhull – but that is perfectly fine.  What Safronoff does is present the two women in stark contrast to each other and show that despite their differences and different approaches, they are striving for and achieving the same thing: women’s equality.  Eddy is ever-faithful, philosophical and patient, whereas Woodhull is an opportunist and takes the quickest path for her purposes. Readers will be amazed and amused by the lives of these two women and the paths they each took to achieve their goals. (Even more amazing for this reader was that despite Victoria Claflin Woodhull’s constant reinventions and schemes, people still listened to her.)


To say that Safronoff has done her homework is an understatement; the book is extremely well researched and documented with extensive notes and an index included.  The author relies on an excess of quotes to move the stories forward, which got a little tedious, as did the extensive background on the Puritans.  An understanding of the Puritans was necessary to put Eddy’s and much of society’s belief system in perspective, but it went into such depth that it seemed to take the story off course. The book provides plenty of information that may be new to readers including the basis of American Spiritualism, the formation of Christian Science, the circumstances around first female presidential candidacy, and the promotion of “free love” as an alternative to marriage.


Crossing Swords has broad spectrum appeal because Cindy Peyser Safronoff writes intelligently without being overly academic; however scholars will find much to ponder and appreciate.  Anyone interested in the suffragist and women’s rights movements will enjoy the historical element, but the personal lives of Eddy and Woodhull are what make this book most enjoyable, thought provoking, and illuminating.

This book was reviewed for Reader Views and is re-posted here by their permission. A print copy was provided to me in exchange for my honest review -- the only kind I give. 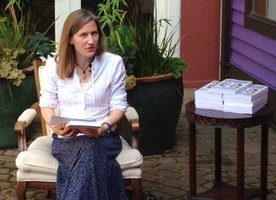 ABOUT THE AUTHOR: Cindy Peyser Safronoff has always loved spending time in the mountains, and her short e-book "Climbing Mt Rainier with the Chicks" tells the story of her reluctant transition from backpacking into the challenge of mountaineering. Her latest work has proved to be far more challenging than climbing Rainier: exploring female leadership at the highest level of empowerment. Her biography "Crossing Swords: Mary Baker Eddy vs. Victoria Claflin Woodhull and the Battle for the Soul of Marriage" compares and contrasts two of the most powerful women leaders of the 19th century -- both often overlooked in American history, but nonetheless influential. With this latest work in women's rights she hopes to climb to new heights.
CONNECT WITH THE AUTHOR:
WEBSITE     FACEBOOK
Posted by Kristine at 2:00 AM