Strong from the Heart

Caitlin Strong wages her own personal war on drugs against the true power behind the illicit opioid trade in Strong from the Heart, the blistering and relentless 11th installment in Jon Land's award-winning series.
The drug crisis hits home for fifth generation Texas Ranger Caitlin Strong when the son of her outlaw lover Cort Wesley Masters nearly dies from an opioid overdose. On top of that, she’s dealing with the inexplicable tragedy of a small Texas town where all the residents died in a single night.
When Caitlin realizes that these two pursuits are intrinsically connected, she finds herself following a trail that will take her to the truth behind the crisis that claimed 75,000 lives last year. Just in time, since the same force that has taken over the opiate trade has even more deadly intentions in mind, specifically the murder of tens of millions in pursuit of their even more nefarious goals.
The power base she’s up against―comprised of politicians and Big Pharma, along with corrupt doctors and drug distributors―has successfully beaten back all threats in the past. But they’ve never had to deal with the likes of Caitlin Strong before and have no idea what’s in store when the guns of Texas come calling.
At the root of the conspiracy lies a cabal nestled within the highest corridors of power that’s determined to destroy all threats posed to them. Caitlin and Cort Wesley may have finally met their match, finding themselves isolated and ostracized with nowhere to turn, even as they strive to remain strong from the heart.

PRAISE FOR STRONG FROM THE HEART:

“A time-jumping, savory Tex-Mex tale, seasoned with all the ingredients of a great thriller.”―Brad Meltzer, New York Times bestselling author

“A mind-blowing tale that takes a flamethrower to our psyches to warm the chill it leaves up our spines. Seething with energy and replete with wondrously staged set pieces, this is thriller writing that defies genre even as it reminds us why we love to read.”―NYK Daily

“Caitlin Strong is one of the strongest female characters ever to hit the page, and Jon Land is the king of the intelligent thriller, continually pushing his own writing to new levels.”―New York Journal of Books 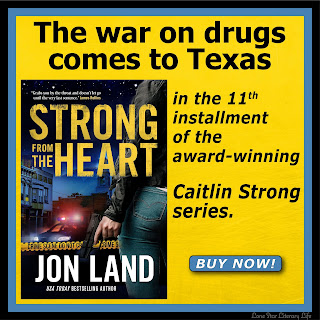 The books in my Caitlin Strong series, the most recent of which is the just-published Strong from the Heart, have won awards as both mysteries and thrillers. That might make you think mysteries and thrillers are the same thing when, actually, they’re far from it, featuring entirely different approaches to pacing, structure, and characterization.

Good question! Now, let me try to answer it.

STAKES:  In his first book, Killing Floor, the great Lee Child introduces his iconic Jack Reacher character stopping over in a town where his brother, coincidentally, was just murdered. Now if Reacher was concerned only with finding his brother’s killer, we’d have a mystery. Along the way, though, he uncovers a massive counterfeiting plot that his brother had been investigating. So, the book isn’t just about investigating a murder, it’s about seeking revenge on the perpetrators and bringing down their crime ring in the process. That’s a perfect example of how a book’s stakes figure into defining what that book is. Think back to James Bond’s cinematic debut in Dr. No and the great line where Bond, lighting a cigarette, responds flippantly after the evil genius villain has just sketched out his plan: “World domination . . .  Same old plan.” Maybe so but stakes as high as that are what help make a thriller a thriller.

A HERO IN JEOPARDY:  Another key element in distinguishing a mystery or crime novel from a thriller is the plight of the hero. In a mystery, we follow the investigation through the eyes of the hero who is chasing the perpetrator while not always being threatened by that perpetrator or larger forces surrounding him. But a thriller places the life of the hero at risk, in danger. In order to survive, he or she must get to the bottom of what’s going on. The villains must not just be caught, they must be stopped. See, thrillers are at their heart quest stories in the grandest tradition and for that reason they are often intensely personal. Remember the great Hitchcock film The Man who Knew Too Much?  Jimmy Stewart’s son is kidnapped to stop him telling the authorities what he knows, so the only way to get the boy back is to stop the bad guys himself. The ultimate quest with the lives of his entire family hanging in the balance as he gets to the root of an assassination conspiracy.

AN OUNCE OF PREVENTION:  Jumping off a bit from the point above, thrillers are almost invariably about stopping something really bad from happening, not just investigating something that already has happened. It’s not a mystery, so much as a puzzle where the hero must fit all the pieces together in order to preempt a truly evil plot sure to harm lots of people. In that sense, the thriller form is interactive, asking the reader to play along with the hero in assembling all the clues. The villain, in turn, is determined to stop the hero’s efforts which creates the kind of nail-biting suspense that lies not only in wondering whether the hero will survive, but also whether he or she will succeed in preventing the Really Bad Thing from happening.

SETTING:  Thrillers, for the most part, are defined by their rapid-fire pace.  And that kind of pacing tends to move the heroes around a lot as they embark on their quest to stop the Really Bad Thing. The great tales of James Rollins and Steve Berry take us all over the world, any number of countries per book. While there are plenty of exceptions to this, Lee Child’s books foremost among them, the nature of the thriller has long been defined by characters shifting about settings both dark, mundane, and exotic in a staccato-like fashion. Like a treasure hunt, where each clue leads to another that takes the hero somewhere else. This is in stark contrast to mysteries or crime tales which normally take place in a single city or, even, town.

HOLDING UP THE MIRROR:  Mysteries and crime tales are seldom motivated or defined by societal concerns. Contrast that with the modern evolution of the thriller. The great paranoid conspiracy books by Robert Ludlum, like The Holcroft Covenant and The Matarese Circle, were spawned by the Watergate era where government became the enemy. Ronald Reagan restored trust to government but also reignited the Cold War, giving birth to the likes of Tom Clancy and a whole spat of thrillers more interested in machines than men. The end of the Cold War that accompanied the collapse of the Soviet Union in the early 1990s pretty much killed the thriller form for a while. Sales plummeted, as thriller writers sought a new identity, a new enemy. We got both on 9/11. Suddenly a whole new generation of bad guys were born in Islamic terrorists, obviously capable of doing the Really Bad Thing thought to be only the product of fiction until that fateful, redefining day. The post 9/11 era, that birthed the likes of Vince Flynn, Brad Thor, Daniel Silva, and Alex Berenson, reinvigorated the thriller form, and planted the seeds for the explosion of the genre’s popularity today.  All of a sudden, we needed heroes again, and characters such as Mitch Rapp, Gabriel Allon and Scott Harvath more than fit the bill. If we couldn’t kill the boogeyman in real life, at least we could kill him in fiction, and the new wave of heroes was more than up to that task.  But thriller writers are also ahead of the curve as well.  Before he created Hannibal Lecter, Thomas Harris foresaw 9/11 in Black Sunday, his brilliant book about a terrorist attack on the Super Bowl. The Really Bad Thing in Ian Fleming’s 1961 Bond novel Thunderball was nuclear terrorism. Who could have known? And now we’re left wondering what the “post-COVID-19” thriller will look like.

I could go on with this forever, but any writer needs to know when to stop, when enough is enough. Thrillers are as broad as our imaginations, elegantly encapsulating what the great John D. McDonald once defined as a story: “Stuff happens to someone you care about.” Trust me, an awful lot of stuff happens in Strong from the Heart, and I promise you’ll care about all of it!

Jon Land is the USA Today bestselling author of more than fifty books, eleven of which feature Texas Ranger Caitlin Strong. The critically acclaimed series has won more than a dozen awards, including the 2019 International Book Award for Best Thriller for Strong as Steel and the 2020 American Fiction Award for Best Thriller. He has also authored six books in the MURDER, SHE WROTE series and has recently taken over writing Margaret Truman's CAPITAL CRIMES series. A 1979 graduate of Brown University, Land lives in Providence, Rhode Island and received the 2019 Rhode Island Authors Legacy Award for his lifetime of literary achievements.
◆ FACEBOOK ◆ TWITTER◆
◆ AMAZON ◆ GOODREADS ◆
◆ BOOKBUB◆WEBSITE ◆
---------------------------------------
GIVEAWAY! GIVEAWAY! GIVEAWAY!
FIVE WINNERS
GRAND PRIZE (US only):
5 Autographed copies
Ends midnight, CST, November 8, 2020