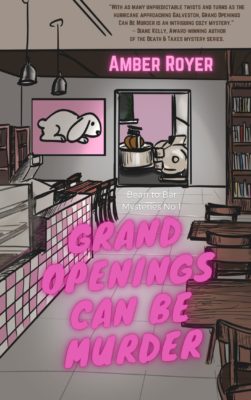 Felicity Koerber has had a rough year. She's moving back to Galveston Island and opening a bean to bar chocolate factory, fulfilling a dream she and her late husband, Kevin, had shared. Craft chocolate means a chance to travel the world, meeting with farmers and bringing back beans she can turn into little blocks of happiness, right close to home and family. She thinks trouble has walked into her carefully re-built world when puddle-jump pilot Logan Hanlon shows up at her grand opening to order custom chocolates. Then one of her employees drops dead at the party, and Felicity's one-who-got-away ex-boyfriend - who's now a cop - thinks Felicity is a suspect.
As the murder victim's life becomes more and more of a mystery, Felicity realizes that if she's going to clear her name in time to save her business, she might need Logan's help. Though she's not sure if she's ready to let anyone into her life - even if it is to protect her from being the killer's next victim. For Felicity, Galveston is all about history, and a love-hate relationship with the ocean, which keeps threatening to deliver another hurricane - right into the middle of her investigation. Can she figure it out before all the clues get washed away? FIRST IN A NEW SERIES!

PRAISE FOR GRAND OPENINGS CAN BE MURDER:

"With as many unpredictable twists and turns as the hurricane approaching Galveston, Grand Openings Can Be Murder is an intriguing cozy mystery set in a new chocolate shop along the island’s historic Strand. Readers will love learning about the bean-to-bar chocolate-making process while the store’s owner, Felicity, pursues truth, justice, and the perfect chocolate bar."
-- Diane Kelly, Award-winning author of the Death & Taxes, Paw Enforcement, House Flipper, and Busted mystery series.
CLICK TO PURCHASE!
│ Amazon│ Barnes and Noble │Apple Books │
│ Bookshop.org│Kobo│IndieBound│

Waiting on a Hurricane
Guest Post by Amber Royer

I hope you enjoyed the book trailer.  I made it during COVID, which made getting the shots that are actually from Galveston a challenge, but we did it safely social distancing.

The weather becomes a large part of this book, and even while we were in Galveston, the sky got stormy and windy.  We were there not long after my parents, who still live in Southeast Texas, evacuated up to Dallas from Hurricane Laura.  In Grand Openings Can Be Murder, there’s a hurricane coming in as the story events progress.  While my parents were here, watching the storm radar and checking what their electricity provider had to say about power in their neighborhood, I realized that while the technology may have changed, that impending sense of worry hasn’t.  And I feel even more certain I captured it well in my book.

When I was a kid, I remember using paper hurricane tracking maps, with red and white grids for drawing in dots.  Anybody else remember those?  And I remember tough decisions on whether or not to evacuate, because once you get on the highway on an evacuation route, you are committed – even if the storm changes course while you are traveling.  I remember one time being stuck for six hours in my brother’s Toyota Celica with him – and his German Shepherd – only to find out that the storm had turned towards Louisiana, where we were headed.

That sense of waiting can just about drive you crazy.  One year, my husband and I had planned a trip to Galveston for our anniversary and had stopped off at my parent’s house on our way there.  They were planning to go across with us and stay on the island for a couple of days.  Only, the week of the trip, a storm showed up in the Gulf, and we spent the whole time at their house, because the storm was threatening to make landfall while we were scheduled to be there.  My husband had never toured the Tall Ship Elissa, and we had plans to go during our trip.  Only, by the next time we were able to visit Galveston, the Elissa had been closed off for repairs.  Damage sustained during Hurricane Ike had sent a power surge through the ship, accelerating a process called electrolysis, which ate away at the hull of the ship, which rusted out without anyone noticing until the ship was inspected much later.

But don’t worry – Jake eventually got to tour the Elissa – and even go down belowdecks.  It was right after the ship reopened – you can still see repair materials in the cabin picture.  Because repair and renewal are just a part of living on the coast. 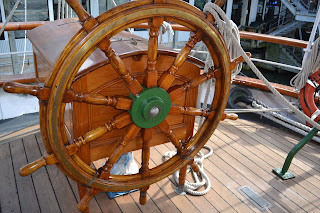 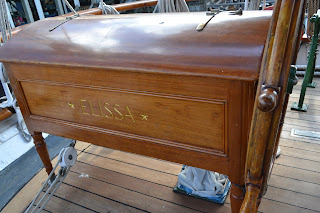 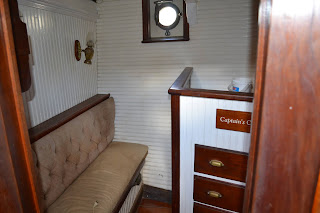 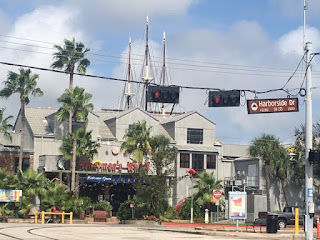 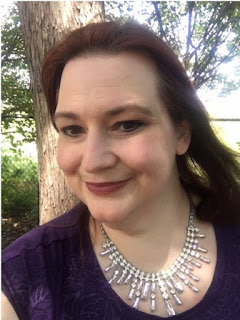 Amber Royer writes the CHOCOVERSE comic telenovela-style foodie-inspired space opera series, and the BEAN TO BAR MYSTERIES. She is also the author of STORY LIKE A JOURNALIST: A WORKBOOK FOR NOVELISTS, which boils down her writing knowledge into an actionable plan involving over 100 worksheets to build a comprehensive story plan for your novel. She blogs about creative writing technique and all things chocolate at www.amberroyer.com. She also teaches creative writing for both UT Arlington Continuing Education and Writing Workshops Dallas. If you are very nice to her, she might make you cupcakes.
◆ WEBSITE ◆ BLOG ◆
◆ FACEBOOK ◆ TWITTER ◆
◆ AMAZON ◆ GOODREADS ◆
◆ INSTAGRAM ◆ YOUTUBE ◆
---------------------------------------
GIVEAWAY! GIVEAWAY! GIVEAWAY!
ONE WINNER
Autographed copy of GRAND OPENINGS CAN BE MURDER
and a $25 Gift Card to Dandelion Chocolate
(US only. Ends Midnight, CST, February 19, 2021) 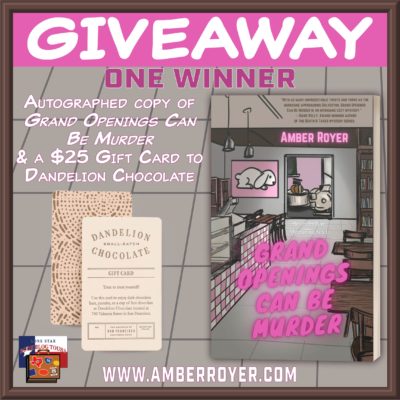