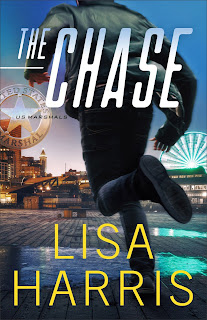 US Marshal Madison James may not be sure who shot her three months ago, but she does know one thing--it's time to get back out into the field. When her partner, Jonas Quinn, receives a message that a federal warrant just came in on a man connected to a string of bank robberies, Madison jumps at the chance to get back to work. What she and Jonas find is a bank robbery in progress that's gone wrong--and things are about to get worse.
For these bank robbers, it's never been just about the money. It's about taking risks and adrenaline rushes -- and getting caught is not part of the game. When the suspects escape, Madison and Jonas must hunt them down and bring them to justice before someone else--someone close to them--gets hurt . . . or worse.
From Seattle to the San Juan Islands, bestselling author Lisa Harris takes you on a nonstop chase where feelings are complicated, and failure isn't an option. 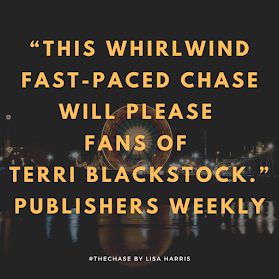 From Chapter One of
The Chase
by Lisa Harris

“You can feel free to stop by with breakfast any morning of the week. I promise I won’t complain.”

He laughed at the comment and picked up one of the bacon croissants. He took a bite. “Did you run this morning?”

She glanced out the window, not surprised it was still raining. “I chose to bike indoors over getting soaked.”

“I don’t blame you.” He wiped his mouth. “How was your last day in physical therapy?”

She turned back to him. “Worried about my overdoing it?”

“Maybe.” He took another few bites of his croissant, finishing it off quickly.

“I passed, Jonas. I even did a ten-minute mile.”

“Not bad. You’ve worked hard these past couple months.” Jonas grabbed a second croissant. “How are you sleeping?”

She avoided his gaze, focusing instead on her breakfast. “Why the twenty questions?”

“I know I slept, because I dreamed a lot.” She kept her voice even, not wanting him to worry about the nightmares that woke her up most nights. Or the memories that refused to surface.

“The memories will come back eventually,” he said, reading her mind. “Just give yourself some time.”

Except she’d given herself time, and three months hadn’t been enough.

She waved her hand like it didn’t matter. “Stop worrying about me, Jonas. I’ll get through this. It’s part of the risk we take every day.”

Ironic, though, how she could chase a convicted felon halfway across the country and end up with barely a scratch, and then turn around and get shot in her own home. The place where she was supposed to be safe. It was part of the reason she’d put her old house on the market and snatched up the property she’d been eyeing in a different neighborhood. All new locks and double bolts on the doors had helped ease her anxiety. Running scared wasn’t something she was used to. She was the one who went after the criminals. Not the other way around.

But what she did know about the accident terrified her. Whoever had shot her had also murdered her husband.

“I just wish whoever shot me wasn’t still out there,” she said.

“How? We have nothing.” She grabbed a napkin from the bar, wiped the sticky sugar residue off her fingers, then eyed the spinach croissant before picking it up. “No forensic evidence. No DNA or fingerprints. Even our one eyewitness— yours truly—doesn’t have anything, and we know I was just a couple feet from the shooter.”

At least that’s what she’d been told from the ballistics report.

“You’re putting yourself under too much pressure.”

“No.” She shook her head while Jonas grabbed another croissant and started eating it. “I need to remember. Luke has been dead for five years, and I’m no closer to finding his killer than we were the day he was murdered.”

She’d told Jonas some of the details of the day her husband died. Luke had just finished a twelve-hour shift in the ER. He’d called her on his way to the parking garage like he did almost every day. He said he would pick up some takeout and meet her at home once she got off. She expected him to be there when she pulled into the driveway. Instead, two officers from her district office were waiting to give her the news that Luke had been shot twice in the chest in the hospital parking garage.

For her, life was never the same again.

Madison ran her hand automatically across the four-inch scar on her stomach, trying to focus on the spinach croissant she’d been nibbling.

She hadn’t told Jonas how many hours she spent going over every scrap of evidence the authorities had collected on both Luke’s death and the attempt on her life.

But all she’d found were dead ends. The only evidence they had was a black rose left at the scene—mirroring the cryptic message someone left on Luke’s grave every year—confirming in her mind that whoever had shot her was the same person who’d killed Luke. But she had no idea what they wanted. Or when they might strike again. 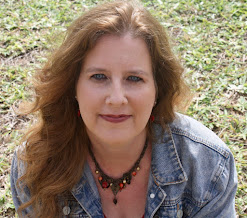 Lisa Harris is a USA Today bestselling author, a Christy Award winner, and the winner of the Best Inspirational Suspense Novel from Romantic Times for her novels Blood Covenant and Vendetta. The author of more than 40 books, including The Escape, The Traitor's Pawn, Vanishing Point A Secret to Die For, and Deadly Intentions, as well as The Nikki Boyd Files and the Southern Crimes series, Harris and her family have spent over 17 years living as missionaries in southern Africa. She is currently stateside in Tulsa, Oklahoma.

ONE WINNER receives the first two books in the US Marshals Series +
a Bookish Notepad & Bookish Notes Stickers. 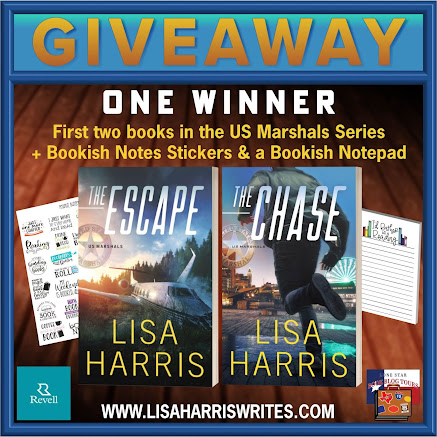 GIVEAWAY
a Rafflecopter giveaway
Click to visit the LONE STAR LITERARY LIFE Tour Page
for direct links to each stop on this your, updated daily.
Or, visit the blogs directly: