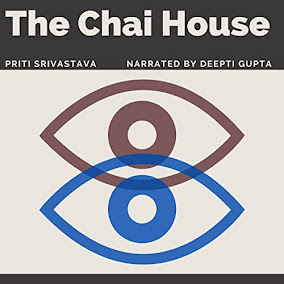 The Chai House is a haunting debut novel that explores the complexity of community when individuals are unaware of their own roles in upholding systems of oppression. Swati has spent her entire life trying to live up to her family’s expectations of her. She has learned it is easiest to just do what is asked of her, without resistance; a skill that has helped her survive in the early years of the Knights, an authoritarian regime. When her mother has a request for Swati, she agrees to it as it is the only way to help her young niece have some sort of future. An emotional page turner, The Chai House examines the desire to be true to yourself in a world where familial, cultural, societal, and political values direct you to stay small and stay silent.
BUY THE BOOK:
AUDIBLE ~ AMAZON
add to goodreads
AUDIOBOOK REVIEW

“Assimilate now, assimilate once we break you, or assimilate when you die. The choice is up to you.”

In the vein of The Handmaid’s Tale, in The Chai House, Priti Srivastava gives readers a dystopian America where women are subjugated – for their own good, of course.  To protect women, the most precious commodity, Knight and his authoritarian regime have taken over part of a split nation and created rules that remove rights for females while giving permission to men to be beasts.  Women can’t receive an education and have curfews. Knowledge is power, and they can’t be out at night, you see, because it’s not safe…because of men. Oh, and if they were out in the evenings, gallivanting about, they wouldn’t be in their homes cooking dinner for their Knights and doing their chores. A Queen might have it a little better with her arranged marriage and purity intact (prior to arranged marriage, naturally), because those impure women, the worker wives (who do the scullery), and the loaner wives (available because men need companionship when traveling, bless their hearts), allow a Queen to have a modicum of freedom...from the men and their rules.

While Srivastava doesn’t give the specifics of what got the world to this point, it’s implied that the nation split, and possibly chemical warfare ensued. There’s reference to the Mideastern wastelands and fumes that cause hallucinations and sterility in men, making it a perfect place to send those noncompliant men. There are also references of continuing battles to win or win back cities and territories from Knights, who seem to be primarily white.

Our main character and narrator, Swati, is a strong-willed and intelligent young Indian American woman who sums up her world early on by saying she had a good life until the Fascists came. Her relationship with her mother, Amma, is complicated, and according to Swati, Amma “will never understand love. She only understands duty. She only understands rules.” But as happens when children mature or are forced to grow up early, Swati begins to understand her mother’s actions and realizes there is more to Amma’s behaviors than meets the eye, and Amma’s warning of being cautious of powerful white men is a piece of advice to take seriously.

“I came here for a better life for my daughter and instead both my daughter, and my granddaughter will have less freedom than I ever did.”

Running parallel to Swati’s story is a second one that seems intrusive and out of place initially. Readers get brief snippets into the nomadic life of Cindy and her young daughter, Jenny. These characters are voiced with a syrupy Southern accent, and they seem to be white females who are rebels trying to survive and on the run from Knight. The author shows the tenderness between this mother and daughter, but then juxtaposes that with the things they must do to survive. There are alarming scenes that are powerful in their irony, as in how Cindy considers herself a good parent and the concern of Jenny that Cindy’s kindness could get them killed.

While the two separate plots seem incongruous, Srivastava moves each forward and eventually connects them in a most surprising and horrific way, leaving readers with a jaw-dropping ending that had this one exclaiming, “WAIT! WHAAAAATTTT?!”

The Chai House is a novella-length story (127 pages) that I think could do with a developmental edit to fill the considerable holes and gaps in the stories. Granted, in listening to a story instead of reading one, it’s easy to miss a quick but vital piece of information. However, there were fine details that seemed significant in their mention but where never explained or connected anywhere else. Srivastava provides rich descriptions of scenes and situations, but often there’s a lack of providing the why behind them. The result is that after I finished the book, I had quite a “but what was X about?” list in my notes.

ABOUT THE NARRATION: Deepti Gupta is a great narration choice, and her voicing of the Indian character – young and old, male and female -- perfectly complemented Srivastava’s text. Her pacing is slow but even, and while her Southern accent was a bit over the top, it left no doubt as to who was speaking in those sections. I listened at 1.25x on Audible, which was a little faster than I’d like, but better than 1x. (Audible really needs to align with other platforms that allow finer tuning of speed.)

Overall, The Chai House is an excellent debut, and I plan on reading the eBook to re-visit the story. The author is a gifted storyteller and this world they have created clearly has more stories to be told. I will absolutely will pick up the next book they write. 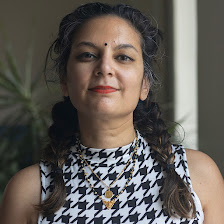 Author Priti Srivastava lives in Madison, Wisconsin with their best friends. Priti works to create inclusive spaces as they hope that one day everyone will feel as though they belong. When Priti isn’t working or doing chores, they enjoy playing video games, making their friends laugh, eating samosas, and sitting quietly. They also love to read and on the rarest of occasions Priti writes about Priti in the third person. Priti loves to connect with readers. Follow them on social media to request a virtual visit with your book club.
TWO WINNERS will receive their choice of
autographed or audiobook copies
of The Chai House
(US only; ends November 11, 2022)
https://gleam.io/Mz6dl/the-chai-house-book-tour-giveaway
THE CHAI HOUSE Book Tour Giveaway
Posted by Kristine at 2:00 AM