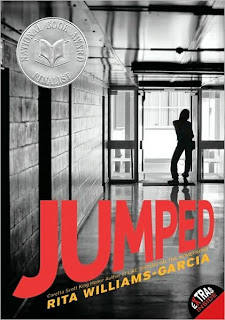 Okay, I'm just gonna say it:  I did not like this book.  It has an interesting format - it alternates chapter by chapter between three different high school girls' perspectives of events in one day of school - and the characters are fleshed-out well enough that you know them. But I didn't like any of the characters and was disappointed with the choices each of them made and the lack of character each of them displayed.
***spoiler alert*** ***spoiler alert***
I kept waiting for one of these kids to do the right thing so that everything would turn out well, but they didn't and it didn't.  I was saddened that this was probably a very realistic portrayal of how kids might act and the consequences of their actions. What bugged me is that Leticia, who in my mind was guilty on many fronts, walked away from the events that day. Even when she knew the seriousness of what happened to Trina - apparently a coma and resulting brain damage - it was more a source of gossip than something she learned from.  She was the only one who could have changed the course of events, and she didn't, and didn't seem to have remorse.  When the teacher collapsed, Leticia whips out her phone. . . to call a girlfriend and gossip about it.  Why not call for help? And the same when Trina gets attacked - Leticia whips out her phone to gossip, not to call for help. Dominique has no remorse for putting Trina into a coma and causing the brain damage. No remorse that she ruined someone's life because her own life wasn't going right. And Trina, so conceited and caught up in herself and her perfection that she overestimates her importance and popularity and misinterprets how everyone interacts with you.  These kids really bothered me. And it scares me because I am afraid many kids have become numb to so much. They won't step in and do the right thing because it's "not their business" or they just don't care.
I was bummed-out the whole day after reading this one.  Truly.