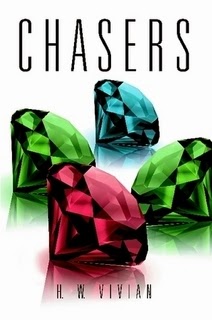 YA / Fantasy, magic, mystery
I gave this book 3 of 5 stars on Goodreads - I liked it!

The premise of this story is one of the most unique I have encountered in YA books. That premise, in combination with the dazzling cover, enticed me into reading H.W. Vivian's Chasers.

Narration was done in alternating chapters from three-ish viewpoints: main character Shelby's, nemesis the Spirit Man's, and confusing character (more on that in a bit) Steve's -- and also one other chapter from another character we never meet again, whose sole purpose is to give us information on the Spirit Man.  It was an odd tactic, but I liked knowing more about the Spirit Man and his motivations and history.  It didn't make me forgive the Spirit Man or have sympathy for him, but it was interesting to know why he had a vendetta against all the Conditionals, and the Spirit Man was one of the best written characters of the book.

Where the story fell short for me was in unrealistic reactions & emotions by some of the characters, but primarily Shelby. For example, fourteen-year-old Shelby has a particularly horrifying encounter with the Spirit Man where she is physically harmed.  Where most people, teenaged or not, would have a complete meltdown and possibly even go into shock if something like this happened to them, Shelby doesn't even break down into tears when it's over.  This was nightmare stuff and actually a strong point of author Vivian's writing is in her descriptions and attention to detail.

Another problem for some may be that our heroine, Shelby, isn't really even likable. Though many teens (humans!) are egocentric by definition, Shelby is conceited and pompous to the extent that she even states things about her adoring fans and her general awesomeness -- and she's a bully.  This combination made it hard to believe that she would realistically have an ounce of popularity, yet she did.  I kept waiting for a dose of humility, or a comeuppance -- something satisfying enough to make her a likable person, but it never really came. Of course, there is no rule that says the main character of a book has to be likable, and certainly Shelby is memorable, which is another kudo to Vivian's writing.

Confusing to me were the characters of Tyler and Steve, who really didn't need to be included. The information Tyler shared could have easily been conveyed by another character (May's grandmother or Shelby's parents), and the insta-love fell flat. Steve's back story seemed irrelevant, bordering on inappropriate, and the one contribution he made in conjunction with Shelby's quest seemed unnecessary. It is possible that these characters could come into play in a sequel book, but the story had closure, with just a few loose ends that really didn't need to be tied. I am not sure what there is left to tell, but if there is more to come in this story, I wish that Steve in particular would have been better attached.

The book is violent, but not gory, and the language is clean. There is no sex, though there are some adult situations (alcohol, marriage problems, references to infidelity) courtesy of character Steve.  Fans of curses and the supernatural will enjoy this one-of-a-kind storyline, and I look forward to more from H.W. Vivian.

Thank you to Lulu and the author for providing me a free copy of this book in exchange for my honest review -- the only kind I give!

Click to purchase Chasers from Amazon, Barnes and Noble, or Lulu Press.