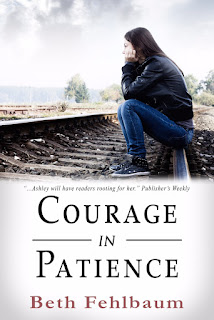 Tenacious 14-year-old Ashley Asher claws her way back to normalcy after enduring six years of an unimaginable Hell. Uprooted from her negligent and selfish mother, Ashley finds solace in the safety of her father's home. Building a relationship with her stepmother, she's finally able to open up and confront the past that haunts her.

With the help of her stepmom, therapist, and a group of troubled adolescents, Ashley battles her demons, struggling to find the normal teenage life she's always wanted. Can Ashley find the strength and courage to overcome the horrors of her past while fighting for the future she so deserves?
PURCHASE LINKS:      AMAZON      BARNES & NOBLE 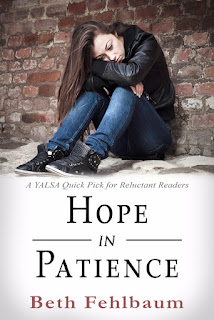 Hope in Patience continues the story. . .

Still shattered from the horrific events of her childhood years, 15-year-old Ashley Asher is barely holding it together. Battling her vicious and vile mother who still sees her as the villain and not the victim, Ashley's stuck in a cycle of self-injury and self-hatred as a result--despite the many people who trying to pull her out of it.

Adolescence is hard, but throw in a new school, a new family, and a father she hardly knows, Ashley's need for self-destruction and pain intensifies. Her new therapist, Dr. Matt, may be unconventional with bizarre antics, but he'll do whatever it takes to pull Ashley out of the doldrums. Ashley just wants a crack at normalcy. But can her counselor and the friends and family who love her teach her that "crazy is the new normal" and that nobody has it easy?
PURCHASE LINKS:      AMAZON      BARNES & NOBLE 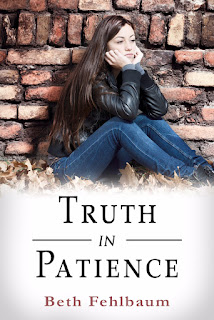 Truth in Patience concludes the story. . .
Truth in the past.

Finally adjusting to life in small town Texas, Ashley Asher sees a glimmer of what happiness really is. Even her new relationship with the attentive Joshua Brandt shows promise of a first romance. But Ashley's fear of intimacy after years of unspeakable abuse may cause friction and distance in their relationship.

Determined to prove to her that she's healing, Dr. Matt, her beloved therapist, shows her that "life is messy." And he doesn't know how messy it is about to get. When her mother decides that Ashley belongs back in their hometown with her, Ashley is forced into another family feud that she isn't prepared for. Refusing to leave behind the new life she created in Texas, Ashley and her mother go head-to-head. But can Ashley finally find the courage and strength to battle her demons when her mother might be the biggest demon of all?
PURCHASE LINKS:     AMAZON      BARNES & NOBLE

From Book 3, Truth in Patience

Christmastime without my mom was hard, to say the least.  She didn’t send me so much as a card.  I didn’t mean to mess up like I did.


It started out as a homework assignment from Dr. Matt.  He suggested that I do something to help other people as a way of pulling myself out of my own pain.  I like to do crafts, so I bought some ornaments- some clear glass balls- and painted them with Christmas scenes.  Bev said that I could put them in the teachers’ lounge, sell them for five dollars each, then give the money to the Eula Mason Community Center, which helps poor people in Patience.  I’d donate any leftover ornaments to the nursing home for their Christmas tree.

The first weekend in December, I stayed up late working on the ornaments.  While I was painting, I was watching a Lifetime movie about a mom who gives up nearly everything to win custody of her kids, and it sent me down the wrong road: Memory Lane.  Most of it’s a blur, but I know I smashed the ornaments into sharp slivers and carved up my neck, arms, and legs.  I freaked out when I started bleeding all over the place, and I was screaming when I burst through David and Bev’s bedroom door.

They rushed me to the hospital, and the emergency room doc said that I came within a quarter-inch of a major artery in my neck.  I don’t think I really wanted to die; I just didn’t know what to do with all that rage.  Totally fucked up the whole “doing good for others” thing and my chances of being trusted enough to be left alone for long.  No chance of getting my driver’s license any time soon, seeing as how I was dumb enough to confess to Dr. Matt that I fantasized about plowing a car into a bridge column.

My birthday in January wasn’t much better.  Dr. Matt always tells me to be careful what I wish for—did I really want my mom to contact me for my birthday?

Turns out, the answer is no. Mom didn’t ignore my birthday like she did Christmas. Instead, she mailed a box containing some of my baby clothes, my baby book, and a handful of photos with me cut out of every picture.

David’s response was to call Mom and tell her that she’s a psycho bitch.

Mine was nothing. Not a thing. I didn’t cry; I didn’t get mad.

I don’t know why Mom sent the baby clothes, unless she was trying to erase every trace of my existence.  There was a jacket with bunny ears on the hood, footed pajamas, and a pink dress with a lacy white apron.  Oh, and a bib that read, “My Mommy Loves Me."
Bull.Shit.


The clothes smelled like Nanny and Papaw’s house: a concoction of my grandmother’s Estée perfume and the vanilla sachet room spray that she nukes her house with on a daily basis.  The familiar smells made my stomach clench at missing my grandparents—or—who I thought they were, anyway.

I placed the box in the side of the wardrobe dresser that I used to hide in.  Every night before I go to sleep, I pull out the baby clothes and photos. I study Mom’s face in the pictures and wonder what she was thinking when she cut me out of them. 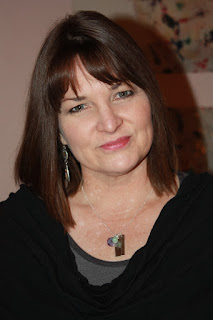 In addition to writing Young Adult Contemporary Fiction, Beth Fehlbaum is a secondary English-Language Arts teacher who frequently draws on her experience as an educator to write her books. She has a B.A. in English, Minor in Secondary Education, and an M.Ed. in Reading.

Beth is a featured author on the 2015-2016 Spirit of Texas Reading List- High School. She is the author of the Kirkus Starred Reviewed Big Fat Disaster (Merit Press/F+W Media, March 2014) and The Patience Trilogy: Courage, Hope, and Truth (Steady On Books, 2016).
Beth is a member of the RAINN (Rape , Abuse, Incest National Network) Speakers’ Bureau. She has a following in the young adult literature world and also among survivors of sexual abuse because of her work with victims’ advocacy groups. She has been the keynote speaker at the National Crime Victims’ Week Commemoration Ceremony at the Hall of State in Dallas, Texas and a presenter for Greater Texas Community Partners, where she addressed a group of social workers and foster children on the subject of “Hope.”

Beth is a survivor of a traumatic childhood, like Ashley in The Patience Trilogy, and the day-to-day manager of an eating disorder much like Colby’s in Big Fat Disaster. These life experiences give her a unique perspective, and she writes her characters’ stories in a way meant to inspire hope.

Beth lives with her family in the woods of East Texas.

NOTE FROM KRISTINE at HALL WAYS: The content of this promo post was provided by Lone Star Literary Life Blog Tours.  If you're a Texas blogger interested in joining the ranks of Texas Book Blog Tours, contact Kristine via the Contact Form found at the bottom of the Hall Ways blog..