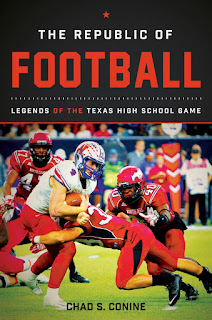 Anywhere football is played, Texas is the force to reckon with. Its powerhouse programs produce the best football players in America. In The Republic of Football, Chad S. Conine vividly captures Texas’s impact on the game with action-filled stories about legendary high school players, coaches, and teams from around the state and across seven decades.

Drawing on dozens of interviews, Conine offers rare glimpses of the early days of some of football’s biggest stars. He reveals that some players took time to achieve greatness—LaDainian Tomlinson wasn’t even the featured running back on his high school team until a breakthrough game in his senior season vaulted him to the highest level of the sport—while others, like Colt McCoy, showed their first flashes of brilliance in middle school. In telling these and many other stories of players and coaches, including Hayden Fry, Spike Dykes, Bob McQueen, Lovie Smith, Art Briles, Lawrence Elkins, Warren McVea, Ray Rhodes, Dat Nguyen, Zach Thomas, Drew Brees, and Adrian Peterson, Conine spotlights the decisive moments when players caught fire and teams such as Celina, Southlake Carroll, and Converse Judson turned into Texas dynasties.


“This is a wonderful, well-written book, full of compelling details and stories. A ‘must read’ for any Texas football fan.” —DAVE CAMPBELL Dave Campbell’s Texas Football

PURCHASE AT YOUR LOCAL BOOKSTORE OR
University of Texas Press

Hall Ways Review:  In The Republic of Football: Legends of the Texas High School Football Game, author Chad Conine does not take the typical approach that one might expect. There’s no ranking of what coach, what player, or what game is most important, and there’s not a top ten list in sight. Everything Conine writes is about successful teams and people and the periods within which they found success.

Through interviews and a great deal of research, Conine shows the back-up to those success stories and digs to get to the root of each story. Why did it happen? What things came together to allow for that person's/team's/coach's success?  There are times in the book that Conine interviews someone who has made it big in the NFL, but in the interview, those people always return to their beginnings in high school.  Conine also digs into the sometimes unlikely stories about why big changes happened -- like Art Briles's story of being head coach at Hamlin High School for the 2A playoff football game in 1984. Briles’s carefully researched plan failed that night, but he took what he learned from that game and applied it, and it changed the game – not just in Texas but across the nation -- ever after.

Readers are treated to many opinions from coaches and players about what is important in order to be successful. What is revealed is that more than a few shared the same ideas: never give up, finish the challenges put in front of you, and it’s not just one’s physical abilities that are important but also hard work and being smart and managing emotions.  Through numerous conversations with actual players or those who knew them best, Conine got some really good stories. Some of my personal favorite stories were among those earliest in the book including Hayden Fry’s finding a loophole to have ten senior starters on his high school team, and that of Grant Teaff making the team at Angelo State because he was one of three left standing.

The writing style is understandably that of a reporter given the author's twenty plus years in the field, and the few errors are not anything that would be noticed by most readers.  Conine clearly enjoys his story telling, and within many chapters, he has a tendency to begin the main story, go down a rabbit hole, and then circle back to the main story of the chapter. The only real issue I had with this book is that there doesn’t seem to be any logic to how the chapters are organized. They are not in chronological order, and though there are obvious themes that are covered (dynasty teams, key players teams, integration), those chapters aren’t grouped and are almost random in their placement.

Rabbit holes and structuring aside, across the board, the information and anecdotes Conine shares are wonderfully rich and full of character. What will truly hook readers is that Conine doesn’t ever gloss over his subject matter resulting in a compilation that is sure to have fans feeling both nostalgic and excited. Are you ready for some football? The Republic of Football is a great place to start. 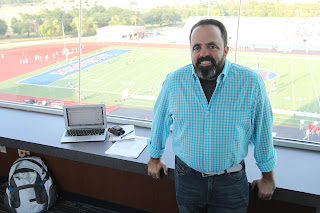 Conine is a freelance sports
journalist who has written for the Sports Xchange, Reuters, and Golf.com, among others. He has been covering Texas high school and college football since the late 1990s. He lives in Waco, Texas. 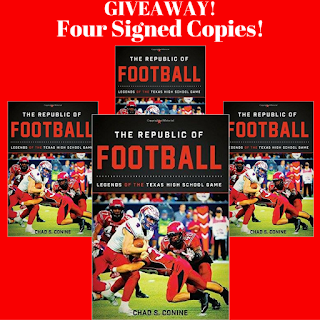 
Check out the other great blogs on the tour!