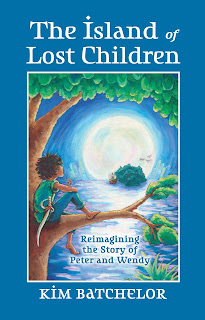 Peter is still the boy who doesn’t grow up. Wendy is a girl who had to grow up too soon. And Wendy’s brother, Michael, has autism and a connection to The Island of Lost Children, a book for readers 8-12 and any fan of Peter Pan. When Peter leaves his island home, it’s to search for pick-up soccer games and mock sword fights. Wendy spends her evenings looking after her two brothers—sometimes bratty JJ as well as Michael—while her parents work nights. In the midst of several unusual events including the disappearance of her classmate, Lily, at odds with her adoptive mother, Wendy doesn’t realize that Peter’s pirate nemesis is keeping an eye on her. Everything changes for Wendy and her family when a peculiar fairy named Bellatresse helps Peter find the girl whose stories he once listened to outside her bedroom window.
With its quirky humor and occasionally touching moments, The Island of Lost Children is about children creating their own stories, families, and communities, all while swashbuckling, navigating mystical rivers, riding child-made roller coasters, and, of course, sailing high through the open skies.

Excerpt from The Island of Lost Children


Chapter One: Look up. It’s Peter.


Peter dove through the rim of the sky and plunged into the buoyant clouds. The wind lofted him upward, and with a twist he wedged his reedy frame between the currents of air. After a free fall sent him spiraling down, he caught himself in time to settle ever so slowly into a hover just above the trees. The wind pushed aside his dark and disorganized hair as he swam above the ground surveying everything below him while the sun withdrew its remaining strands of light.

The smell of sweat and stale popcorn drew his attention to the late afternoon soccer game not too far away. Peter quickly skirted the topside of the clouds to make his way toward it thinking that the teams would have to finish soon because the field had no lights. An old backstop and the cluster of trees behind it made a great place to hide while it still gave him a good view of the game.

The teams were evenly matched. Players in yellow shirts were up one goal over the players in sky blue and the sky blues with the ball were making a push for the yellow team’s goal. The small crowd erupted as the players advanced.

“Go! Go! Go!” Peter shouted and resisted groaning when a blue shirted forward, after some fancy dribbling, mistakenly kicked the ball right at the shins of a midfielder in yellow. After trapping the ball, the center midfielder booted a long pass down the field to one of his forwards.

As he watched the yellow shirted forward, Peter pictured himself sailing down the field just like him, dodging players, determined to score. Usually Peter ignored the people in the bleachers, but he couldn’t help noticing the man and woman and the two boys beside them throwing their hands in the air, yelling and cheering the nimble forward in yellow as he drove toward the goal.

Suddenly, the referee signaled offsides, and the teammates grumbled and the opposition players stifled their happiness at the break.

Instead of screaming at the referee or their son’s teammates, which a lot of adults did in that situation, the family smiled and yelled, “Good job, Miguel!”

Good job? Peter thought. He got ahead of the team and didn’t score. The player’s family didn’t seem to mind at all because they continued to grin and wave at him as the game started up again.

Peter hung around a few more minutes until he decided the game would be over soon and he had other things to do. He drifted into the growing shadows and left the field behind.

Under the cover of night, Peter searched for groups of boys to play with or wayward pirates or anything else that might interest him. Car tires screeched. Sirens blared. Dogs barked. Voices shouted. Through a nearby window, a cartoon flashed across a television screen. After weaving a path around the upper floors of buildings, he soared above them to scan their rooftops.

In the scattering of lights where families lived their lives, he wondered who would come with him next. Who would send out an unspoken wish into the sky? Who would whisper a secret longing to fly away? If you asked him, he’d tell you that those wishes and longings are what brought him there. Deep down inside, though, Peter had a few wishes of his own—wishes for a game of basketball or the sight of his missing nemesis or to finally find the new home of a girl whose stories always called him back to that place. 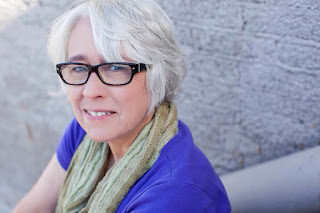 Kim Batchelor writes books for children and adults, stories both real and fantastical, foreign and domestic. She has been published in the Texas Observer, The Best of Friday Flash, and local literary journal, Contexas. She teaches creative writing to incarcerated women and lives in Oak Cliff, Dallas, Texas, with a spouse, two dogs, and way too many cats. One of her prized possessions is a busted tambourine given to her by Eddie Vedder. Okay, he tossed it to her in a dark stadium in Kansas City, Missouri, but the real story is never as interesting as the one she makes up. 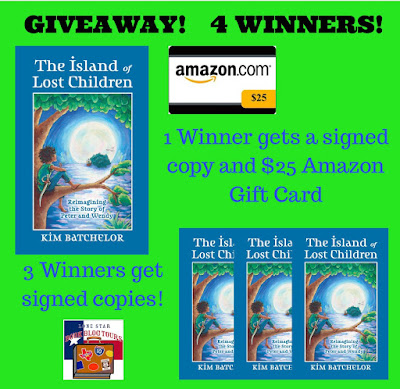 CHECK OUT THE OTHER GREAT BLOGS ON THE TOUR:
Posted by Kristine at 2:00 AM