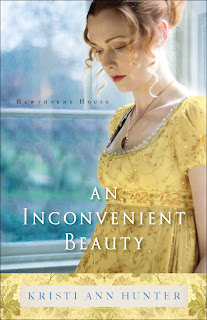 Griffith, Duke of Riverton, likes order, logic, and control, so he naturally applies this rational approach to his search for a bride. While he's certain Miss Frederica St. Claire is the perfect wife for him, she is strangely elusive, and he can't seem to stop running into her stunningly beautiful cousin, Miss Isabella Breckenridge.

Isabella should be enjoying her society debut, but with her family in difficult circumstances, she has no choice but to agree to a bargain that puts her at odds with all her romantic hopes—as well as her conscience. And the more she comes to know Griffith, the more she regrets the unpleasant obligation that prevents her from any dream of a future with him.


As all Griffith's and Isabella's long-held expectations are shaken to the core, can they set aside their pride and fear long enough to claim a happily-ever-after?

Praise for An Inconvenient Beauty:

“With the latest superbly written installment in her Hawthorne House series, RITA award-winning Hunter once again proves she has the key to inspirational-romance and traditional-Regency readers' hearts as she gifts them with another gracefully executed love story that delivers all of the richly nuanced characters, impeccably researched historical plotting, and sweet romance they could ever crave.”
—Booklist

“The final book in the Hawthorne House series brings Hunter's saga to a sigh-worthy conclusion. These family members have become like real people, and although readers will celebrate that the characters have found love, it is bittersweet to say goodbye. The plot moves briskly, yet the romance never feels forced. The period details are, as always, charming, and entrench the reader in the culture and traditions of the era.”—RT Book Reviews

“Hunter's final installment in the Hawthorne House series will delight those already invested in the series as well as any reader who enjoys stories set in Regency-era England. . . . As the London Season plays out, secrets are revealed, past loves return, and hearts align—despite a fair amount of underhanded conniving--to create a fitting finale to the series and a lovely addition to the Regency genre.”—Publishers Weekly starred review

Interview with Author Kristi Ann Hunter
(Though the author had intended to have a video interview for LSBBT, due to Hurricane Irma's impact in her area, she was unable to record it. Please enjoy this written interview instead.)

Where did your love of reading and writing come from?
Books have been part of my life for as long as I can remember. Before, I can remember, actually. My mother tells me I used to look at the picture books and make up the words before I learned to read. There isn't a time when I can't remember having a book or two close at hand. In school, I always loved the creative writing assignments best, but it wasn't until an author visited my elementary school and told us that his first book started out as a fourth grade creative writing assignment that I got the idea to write books myself. It was many years and many stuttered attempts before I would see that dream come to fruition, but the belief that I could one day accomplish it has always lingered with the kind of ingrained faith only a young child can manufacture.

What cultural value do you see in storytelling?
I believe stories are the greatest unifier we have, both within a culture and between cultures. Storytelling preserves a culture's history as well as providing a way to pass core values and beliefs on to future generations. Stories are also a wonderful, and in my opinion the best, way to learn about people and cultures that are different. When you read, watch, or listen to a story, you step into someone else's shoes, just for a moment. You get to see things from another perspective, experience things from a new position, and learn more about the other person and yourself at the same time.

What was the hardest part of writing this book?
An Inconvenient Beauty contains subplots that revolve around two elements of real history - the Apothecary Act and the Battle of Waterloo. That meant parts of my timeline were already determined for me. Shaping the story around those pivotal moments was difficult, but it was also fun to work pieces of those historic moments into the book and I found them more of a help than a hindrance.

How does your book relate to your faith?
I struggled with God over control for a very long time. Feeling like I had to do everything myself kept me from learning what amazing plans God had in store. The older I got, the more God would show me the things He wanted to do that I couldn't do in my own strength and understanding.  Learning to hold my life with a looser grip and let God make things happen was a difficult but ultimately rewarding lesson. I put a lot of that personal growth into this story, giving both of my characters elements of that same struggle and growth.

What projects are you working on at the present?
Right now I'm working on a brand new series that will start releasing next year. The series is called Haven Manor and it's still set in Regency England. Unlike the Hawthorne House series, this one will be taking place mostly in the country, away from the city life of London and the sparkling balls and parties. The series will focus on three women, hoping to use the lessons learned from past mistakes to help other people rescue their lives from similar situations. It's been a big change for me, but I'm very excited to share these stories with my readers.

How has your formal education influenced or impacted your writing?
I have a degree in Computer Science, specializing in software engineering and database management. For ten years, I worked in that field. At first glance that would seem counterintuitive to a career in fiction writing, but a lot of the skills I learned for programming have come into play. Instead of seeing how data moves through computer programs and how different pieces of code work together, I look at plot elements and how they can twist and connect. Sometimes it means my stories get ridiculously complicated during the initial writing process and I have to simplify things, but it also makes writing in series easier. At the beginning, I can see how some pieces of story will come into play chapters and sometimes even books later.

Do you have a mantra for writing and/or for life?
I do. And I actually discovered it while writing my first book. When I started to take writing seriously, I did a lot of thinking about what I wanted to write about. One thing kept coming back to mind and that eventually solidified into a mantra that I use for myself, my family, and my writing.
Always remember to be the YOU God made you to be.
I spent too much of my life trying to be someone else or someone I thought others expected of me instead of embracing the way God made me. That's something I hope to save my children and my readers from doing.

Is there one subject you would never write about as an author? What is it?
I always hesitate to say never because as soon as those words come out of my mouth I can hear God laughing in the distance. However, I think I'm fairly safe in saying I'd never write about zombies because ew! Biblical fiction is also something I don't see myself going into because I believe that takes a certain skill and calling that I simply do not have. Subject-wise though, I would be very surprised if I ever found myself writing about solving a murder. Threat of murder? Absolutely. Actual dead bodies on the page? That would be a very surprising day.
Suspense writers will often tell you to solve every sticky plot point by killing someone, but I don't think I have it in me. Just thinking about it makes me shiver.

If you were an animal in a zoo, what would you be? In four words or less, tell us why.
A horse. Because they're graceful and strong but look like they're built all wrong.
And… I went over four words. Not surprising. I never keep things under word count. I'm also not sure regular horses are in zoos so this question could be a total failure.

If you could speak with any accent from anywhere in the world, what would you choose and why?
Scottish! When I was in high school, a Scottish teenage drama group performed for the schools in my area and I was enthralled. It took me a few minutes to settle in to listening to them, but then I could have sat there all day. English and Australian accents are amazing as well, but I think Scottish sort of falls between the two of them so I'd go with that. Plus, I've always kind of wished I had red hair. 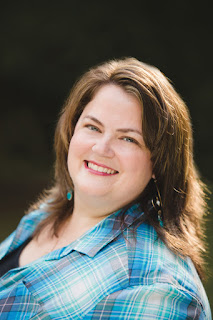 Kristi Ann Hunter graduated from Georgia Tech with a degree in computer science but always knew she wanted to write. Kristi is the author of the Hawthorne House series and a 2016 RITA Award winner and Christy Award finalist. She lives with her husband and three children in Georgia. 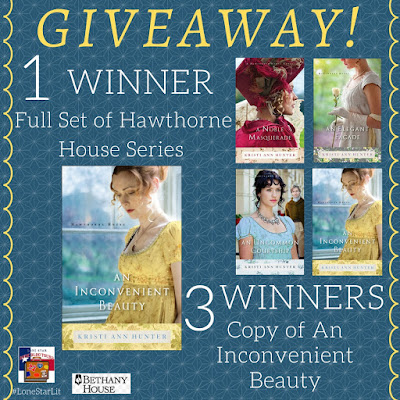