Dead of Night is a compilation of turn-of-the-century-era horror stories with a Victorian flair and traditional horror story plots with unexpected endings. If you like ghosts and ghouls and demons and werewolves, these stories are for you.

HALL WAYS REVIEW: 4.5 STARS. Audio Book Review. It’s always difficult to review a book of short stories, but for Dead of Night, I can categorically say that it was good spooky fun. Of course, I have my favorite of the six stories (which was titled “Jack.” Oooooh, that TWIST!), but every story was thought provoking and creepy in its own disturbing way. DELICIOUS.  I like the Victorian vibe to them all that allowed for significant chills without making me too uncomfortable in the safety of modern times. (I know, what safety? Don’t burst my bubble). Readers will enjoy stories that include a variety of narrators, subtle little hints of things to come, and interesting and unique premises that enrich the stories and set them apart from standard horror.

"I must confess that for someone who is about to die,
writing in my diary is a most odd notion."

From one of the earliest lines in the first story, “Whittaker House,” the reader is drawn in with the dread, doom, and heaviness surrounding the story. Author William Todd masterfully works his words so that the reader is right there with the characters, a fly on the wall that can see something terrible is coming but can’t do a thing about it. The pictures he paints are vivid and range from the most picturesque to the most macabre. Todd’s use of figurative language and non-standard words adds extra impact and raises the writing a literary notch.

"The sky was bathed in blue -- a sea in the heavens that matched any on earth…The serried tops of beech, oak, and elm trees swooned like sozzled sentries between all the properties.

Since I read Dead of Night with my ears, I cannot speak to the quality of the editing, but the sentences flow from narrator Ben Werling’s mouth, and the writing is top-notch. I cannot imagine that someone who writes like William Todd doesn’t take care to make his sentences clean in print. I am likely to buy this book so that I can re-read the stories, so we will see if I’m mistaken.

Speaking of the audio book, I listened at regular speed for a bit, which is best to feel the real gloom of the stories. However, as usual, I am too impatient, so I sped it up to 1.25x, which still worked very well and added anxiety to the mix of feelings listeners experience. There are some sound effects added in, and they were fun but somewhat random. I’m not sure if they added anything, but they didn’t really detract or distract. There is some background noise, a clicking/crackling that starts about seven minutes in and then can be heard sporadically for the rest of the book, but that is really the only technical issue with the audio.

Narrator Ben Werling does a great job in matching the moods of each story and voicing the wide variety of characters and accents. There aren’t many female characters, but those few are important, and Werling (thankfully) doesn’t make much effort to distinguish between the voices of males and females. The result is just right and is never confusing or cringe-worthy (there is nothing worse than all the women sounding Monty-Pythonesque). Werling’s delivery was mostly even, though there are times when the volume of his voice isn’t consistent. His emotion and expressiveness were excellent, and his pacing perfect.  My only complaint were the numerous mispronounced words (particularly in “I’m Still Alive”); those were distracting to me and took me out of the story a time or two.

My nitpicking aside, I highly recommend the audio book of Dead of Night for fans of classic scary stories in the style of Edgar Allen Poe. At just four hours in length, it’s perfect for a short little road trip or to listen during the daily commute. And as I said, I plan on buying it in print so I can get a quick hit of horror any time. Thank you to Audiobookworm Productions and the author for the free audio download in exchange for my honest opinion – the only kind I give.

I received this audiobook as part of my participation in a blog tour with Audiobookworm Promotions. The tour is being sponsored by William Todd. The gifting of this audiobook did not affect my opinion of it.

I have been writing online since the early 2000’s, primarily writing horror stories in the style of Poe and Lovecraft. I was the 2nd most popular author on the website storiesbyemail.com for two years before moving on. I had my first book, a Victorian era horror compilation called Bumps in the Night, published by Mystic Moon Press just a week before they closed their website and never saw my hard work pay off. Afterwards I took publishing into my own hands, became an Indie author and haven’t looked back. My first self-published book was Dead of Night, another compilation of Victorian horror stories, published September 2016 by Createspace and on Kindle by KDP. After its publication I left my comfort zone for mystery and wrote a short story about Sherlock Holmes in the Conan Doyle style. I loved it so much I then did a longer story A Reflection of Evil, both published in 2017 through Createspace and KDP. I have just release Beyond the Gossamer Veil, another compilation of both Victorian and modern supernatural/horror stories and am in the beginning stages of my third Sherlock Holmes installment.  CONNECT WITH THE AUTHOR ON Goodreads.

Ben is an award winning actor and voice over professional, who has performed all across the United States. From Shakespeare to Neil Simon, he has displayed a versatility and diversity in the characters and dialects he has portrayed. Ben received the Joseph Jefferson Award for Leading Actor as abusive talk show host Barry Champlain in Eric Bogosian's TALK RADIO, and was nominated for Best Supporting Actor as Prosecutor Villeforte in Alexander Dumas' THE COUNT OF MONTE CRISTO, also in Chicago. He has worked with an extensive list of theaters in Chicago over the last three decades: Steppenwolf, Bailiwick, Famous Door, Next, A Red Orchid, Raven Theater, First Folio, Writer's Theater, Buffalo Theater Ensemble, as well as Utah Shakespeare Festival, Illinois Shakespeare Festival, Indiana Repertory, Madison Repertory, and Allenberry Playhouse in Boiling Springs, Pennsylvania. He is an Ensemble member of Shattered Globe Theater in Chicago. For almost a decade he was the voice of the Adler Planetarium, hosting live shows and pointing out the stars, planets and constellations on the big dome. Ben has an eponymous weekly vlog on YouTube, that he films, produces, edits and narrates. He lives in Chicago with his wife Amy, two dogs and three cats. 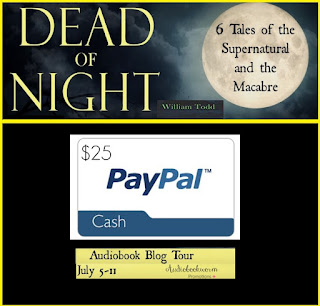 A Reflection of Evil: A Sherlock Holmes Mystery is available for adoption on the Adopt-An-Audiobook page!

Jul. 8th:
Notes from 'Round the Bend

Jul. 9th:
Jazzy Book Reviews
What Is That Book About

➜Sign up as a host here
Posted by Kristine at 8:45 AM