THE EDGE
OF OVER THERE
The Day the Angels Fell, Book 2
by
SHAWN SMUCKER 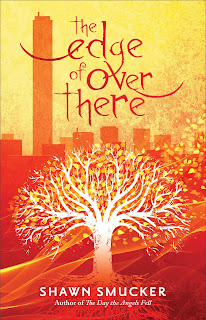 Abra Miller carries a secret and a responsibility she never expected.

Before the Tree of Life, everything in Abra Miller’s life had been predictable. Safe. Normal. But after the Tree, everything has felt fragile . . . like holding a soap bubble in the palm of her hand. After years of fruitless searching for the next Tree, she begins to wonder if it was nothing more than a vivid dream.

Now sixteen, Abra finds a clue to the whereabouts of the next Tree of Life when an ominous woman—who looks exactly like a ghost from her past—compels her to travel to New Orleans where she’ll find one of seven gateways between this world and Over There. But she’s not the only one interested in finding the gateway. There’s also a young man searching for his father and sister, who escaped through it years before. As Abra enters the Edge of Over There and begins her pursuit of the Tree once more, she doesn’t know whom to fear or whom to trust.


She’s also starting to think that some doorways should never be opened.

Praise for The Edge of Over There:
“Blending Biblical elements and urban myths, Smucker creates an enthralling story of supernatural battles between the forces of good and evil.” -- Publishers Weekly


“The Edge of Over There is a mesmerizing, menacing fantasy. Shawn Smucker fuses New Orleans lore, Christian themes, and dystopian landscapes in a thorough exploration of love and its unintended results.” -- Foreword Reviews (Starred Review)

✪✪✪✪✪
HALL WAYS REVIEW. Audio & Print Review. I’m doing things a little out of order because I am writing the review for The Edge of Over There, the second book of the series, before I write the one for The Day the Angels Fell, the first.  That’s because I read (both in print and with my ears) both books, back-to-back, in two and a half days. I’m so geeked-up about it that I’m starting at the end.

THE END?! Please, Shawn Smucker, say it isn’t so. As I drew nearer to the close of The Edge of Over There, I switched from listening to the audio book (which I already had increased to 1.25x speed) to picking-up my beautiful print copy so I could gobble up the words more quickly and find out what would happen – I could not have imagined it! That end twist surely guarantees there is more of this series to come.  There simply must be.

“The house was like a kind, old man: a little crazy, a little angry, but mostly quiet and reflective. And waiting. Always waiting.”

As with The Day the Angels Fell, the descriptions and figurative language will blow-away the readers. There is a beautiful flow to Smucker’s writing; it’s lyrical and lulls you into the story. Then the imagery sticks to you, immerses you, and holds you tightly within the story.  And the characters! Not one is unimportant, and their personalities evoke all kinds of emotions from the reader, including fear and dread that come from a surprisingly tiny package. Upon finishing the stories, I feel exhausted…and invigorated!

Exactly what kind of book is The Edge of Over There? Young adult? Adult? Biblical? Fantasy? Magical Realism? Myth? Yes. Yes, to it all. It’s best not to try wrangling this book into any one box because it’s most certainly not going to stay there. I noted at least a dozen quotes for later consideration because this book will make you think and wonder and dream (nightmare?) a little, too. And if Smucker’s words aren’t enough, every part (there are seven plus an epilogue) begins with a quote to fuel your mind. These quotes come from a wide variety of sources from traditional church hymns and C.S. Lewis to Madeleine L’Engle and Kate DiCamillo. Bonus food for thought.

ABOUT THE AUDIO BOOK.   Listening to narrator Adam Verner further draws and keeps you within the story. I listened at 1.25x, mostly because I am impatient, but I can envision someone who wants to savor the story longer (who is not so impatient), who wants to absolutely wallow in the deliciousness of his reading of the book. It’s like the best read aloud story time EVER. But not for the little ones; The Edge of Over There explores some dark places of human nature and evil itself.

I heard of the two books in this series by way of their two Lone Star Book Blog Tours. The reviews are so glowing that I had to get my own copies to find out what all the buzz is about. Money well spent on both print and audio -- I intend to revisit them all.

Shawn Smucker is the author of The Day the Angels Fell and The Edge of Over There. He lives with his wife and six children in the city of Lancaster, Pennsylvania. You can find him on his website, where you can also sign up for his newsletter in order to find out when and where the Tree of Life will turn up next. 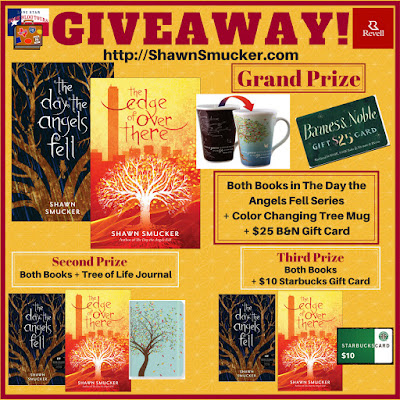