The Other Half of Happy ~ Lone Star Book Blog Tours Review & Giveaway!

THE OTHER HALF
OF HAPPY
by 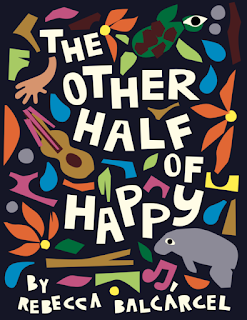 Quijana is a girl in pieces.

One-half crush, one-half buddy: When Quijana meets Zuri and Jayden, she knows she's found true friends. But she can't help the growing feelings she has for Jayden.

One-half kid, one-half grown-up: Quijana spends her nights Skyping with her ailing grandma and trying to figure out what's going on with her increasingly hard-to-reach brother.

In the course of this immersive and beautifully written novel, Quijana must figure out which parts of herself are most important, and which pieces come together to make her whole.

This lyrical debut from Rebecca Balcárcel is a heartfelt poetic portrayal of a girl growing up, fitting in, and learning what it means to belong.

PRAISE FOR THE OTHER HALF OF HAPPY:

"Seriously, I have never felt so seen in a book." --Sophia Jimenez of @LatinxinPub


“Balcárcel’s well-rounded characters, complex friendships, and nuanced family dynamics will resonate with many readers. This is a title that will remain relevant long past its publication date. A must-have for all library collections.” -- School Library Journal starred review

“With poetic, flowing prose that sometimes feels more like a song and characters so convincing that they seem real, Balcárcel’s stunning debut depicts the struggles of being raised with two cultures and the challenges of not being “authentic” enough—in this case, “not Guatemalan enough” or “not American enough.” A lovely, moving, and realistic view of the struggles and insecurities—as well as the beauty—that comes from being bicultural.” -- Booklist starred review

"One of the best and most compassionate depictions of autism I have ever read in fiction.” -- Latinas Leyendo 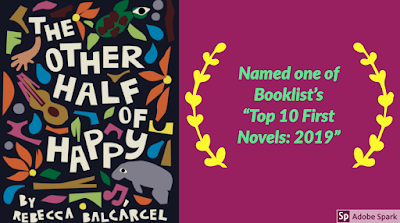 HALL WAYS REVIEW: There is so much to love about THE OTHER HALF OF HAPPY by the incredibly talented Rebecca Balcárcel. It's lyrical, it's deep, it's highly relevant, and most of all, it's REAL. The characters all pop to life and become part of the readers' extended friend or family group. We feel invested in these people and we FEEL for them.

Reading THE OTHER HALF OF HAPPY took me through all the feels from flashing back to my own middle school days, to teaching and parenting kids that age, to losing a loved one. Main character Quijana is an extraordinary young lady, and extraordinarily smart, and I longed for her to realize it.  Somehow, I think one day she will. I know I'll keep thinking about her and the rest of the group (and can't stop, really).

There were many quotables in the book, but I share only a few that illustrate all the different ways Balcárcel is an outstanding writer:

"The English r isn't fancy, but it's like a go-to pair of white socks, matching every word I need.  The Spanish rrr is orange with pink dots, blinged-out with rhinestones and ribbons."

"Her shine doesn't take away from yours."

"Saturday stretches out in all directions, my unexplored island."

"Everything's okay in the end. If it's not okay, it's not the end."

It's funny, but sometimes a book comes to you in a backdoor way.  I first met the author at WORDfest in March of this year, when she conducted an interview with me. She calmed my nerves and was delightful to talk to, and at the Lone Star table, she mentioned her book and showed me the cover -- and of course, I went nuts over it.  Sometimes, you just know a book is going to be next level, and so I made a point to find Rebecca again at the Texas Library Association Annual Conference in April. I got my signed copy and photo, of course, and the beautiful book taunted me -- which led to emails, which led to a book blog tour, which led to my taking this book across an ocean so that I could get it read, which led to my falling in love with people who exist only between pages of a book, and I miss them so much.

I highly recommend THE OTHER SIDE OF HAPPY.  It speaks important messages that we all need to hear and absorb and ponder as part of our shared experience in this world. There truly is something for every reader and readers of every age in this book. 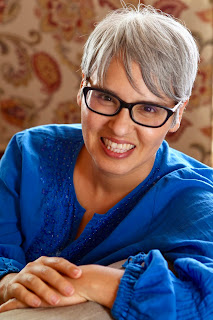 Rebecca is a bi-cultural Latina who loves her autistic sons, her kitty, and serving the students of Tarrant County College as Associate Professor of English. She holds an MFA from Bennington Writing Seminars, where she was awarded the Jane Kenton Poetry Prize. THE OTHER HALF OF HAPPY is her debut novel. 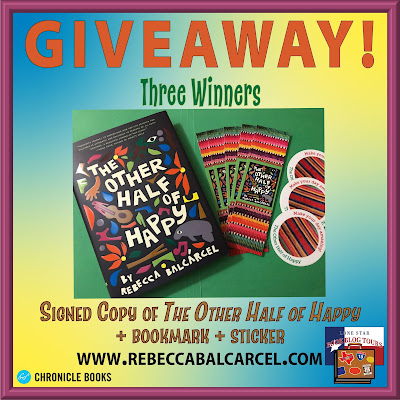