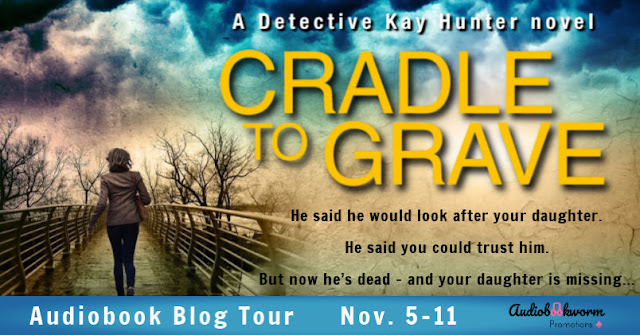 When a faceless body is found floating in the river on a summer's morning, Detective Kay Hunter and her team are tasked with finding out the man's identity and where he came from.

The investigation takes a sinister turn when an abandoned boat is found, covered in blood stains and containing a child's belongings.

Under mounting pressure from a distraught family and an unforgiving media, the police are in a race against time - but they have no leads and no motive for the events that have taken place.

Will Kay be able to find a ruthless killer and a missing child before it's too late?

Cradle to Grave is the eighth book in the Detective Kay Hunter series by USA Today best-selling author Rachel Amphlett and perfect for listeners who love fast-paced murder mysteries.

HALL WAYS BLOG: Audio Book Review.  It’s been a few months since I listened to a Detective Kay Hunter series book, and as soon as I started listening, my spirits lifted. The books and the return of amazing narrator Alison Campbell feel comfortable and familiar. With Amphlett’s books, I know that I’m about to sink into an excellent and intricate police procedural novel, all delivered with the delightful British accent and charm that is such a treat for this Texan’s ears.

“The whole vista was one of Kentish idyll - except for the body underneath the bridge where she stood.”

As is the norm in this series, in Cradle to Grave, we start off with a seemingly peaceful – and in this book, a particularly lovely – setting. Those familiar with the series won’t buy it, and the anxiety builds until the crime is revealed. The oh-so-perfect harmony and calm of the great outdoors and the horror of what it holds are a delicious contrast. While solving the murder quickly isn’t critical – the victim is dead, and there’s a process to figuring out why – Amphlett throws in a secondary, startling plot line that adds real urgency for the team to solve the crime. Readers will feel the desperation and the pages fly by as we watch the case unfold. And unfold it does! Then it twists, turns, and leaves us with our eyebrows raised and mouths open.

With each novel in this series, readers incrementally get to better know the core characters of Kay Hunter’s team. It’s a natural progression of a reader-character relationship, and I really enjoy it. In Cradle to Grave, readers hear more of investigators Gavin’s and Carris’s perspectives and continue to understand them a little better as their fears, quirks, and hopes come to light. Another relationship that continues to organically develop is that between Kay and her mother. While still tentative, it feels good to see them reconciling and getting closer, as a mother and daughter should. No book in this series would be complete without the presence of Kay’s husband Adam. LOVE HIM, though there’s just never enough of him (had to wait two hours for his first appearance). As usual, he amuses readers with his rescue animals and the ensuing antics.

“I can always rely on coffee later, if I need it.”

You may notice in reading this review that these novels rely on the same characters and mechanisms every time. Is it formulaic? Yes, but it’s not a bad thing. Readers know what to expect, and Amphlett delivers in aces. The comforting mugs of tea and coffee, the camaraderie and support within the team, the consummate British politeness – these all make the books a world that readers want to be in. While there is familiarity, Amphlett fills in the formula with enough unique, unexpected, and creative pieces that readers are fully engaged and delighted. (Was there a nod to Lewis Carroll in Cradle to Grave?)

ABOUT THE NARRATION: Alison Campbell has fully embraced the roles and voices of the characters in this series. Outstanding performances, all. Since Authors Direct was the listening platform, I was able to really tweak the speed to exactly where I wanted it – 1.1x! (Audible doesn’t allow such fine-tuning, but Authors Direct doesn't have a place to post reviews.). Campbell’s pacing is even, which makes it easy to listen at any speed. I did miss not hearing her performing a bad-guy voice. She excels in creepy-guy voice. I will hope for that to happen in the next Detective Kay Hunter book. (Fingers crossed there is one!)

Thank you to the author and Audiobookworm Productions for providing an audio code in exchange for my honest review – the only kind I give. Forgive any misspellings of character names – don’t know ‘em when I read with my ears.

I received this audio book as part of my participation in a blog tour with Audiobookworm Promotions. The tour is being sponsored by Rachel Amphlett. The gifting of this audio book did not affect my opinion of it.


Originally from the UK and currently based in Brisbane, Australia, Rachel cites her writing influences as Michael Connelly, Lee Child, and Robert Ludlum. She’s also a huge fan of Peter James, Val McDermid, Robert Crais, Stuart MacBride, and many more.


She’s a member of International Thriller Writers and the Crime Writers Association, with the Italian foreign rights for her debut novel, White Gold sold to Fanucci Editore's TIMECrime imprint, and the first four books in the Dan Taylor espionage series contracted to Germany’s Luzifer Verlag.

Alison Campbell is an actress based in Bristol, U.K. She has lent her voice to 50+ audio books, cartoons, documentaries and dramas. She can be found treading the boards across the country, in everything from Shakespeare to hip hop kids adventures. On screen she has appeared in dramas and science documentaries, her most recent co star was a CGI elephant. She can also be found performing the Natural Theatre Company's award-winning surreal brand of interactive comedy around the globe.      Instagram

Nov. 7th:
All the Ups and Downs
Dab of Darkness Book Reviews

Nov. 11th:
The World As I See It
Bound 4 Escape
Nesie's Place
2 Girls and a Book

RELATED (Not in order):