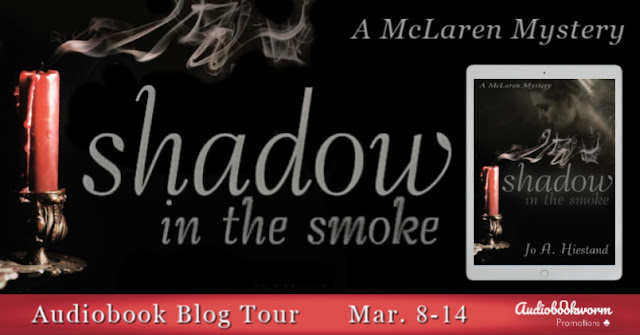 SHADOW IN THE SMOKE

THE McLAREN MYSTERIES, BOOK 3
BY JO A. HIESTAND
Narrated by Steve Hart

Janet Ennis tragically died five years ago in what the police labeled an accidental fire. But Janet’s mother, Nora, believes it to be murder and arson. And she’s hoping ex-cop Michael McLaren can prove it quickly, for she’s losing her memory to dementia.

As McLaren pokes through the case details, he becomes emotionally involved with the dead woman. Yet, Janet isn’t the only person who threatens his mental well-being. A series of arsons on his own property hint that he’s upset someone connected with this case.

Motives for Janet’s murder rise like the smoky tendrils of a fire. And motive aside, the murder scene seems a bit too pat: a drought-stricken landscape eager to lap up flames and a conveniently locked door barring Janet’s escape.

Will McLaren solve the case while Nora can still comprehend the resolution, or will Harvester’s plans see McLaren’s career go up in smoke?

HALL WAYS REVIEW: Audio Book Review: Shadow in the Smoke is the third book in The McLaren Mysteries by Jo A. Hiestand, and the first I’ve read, but it won’t be the last. It works perfectly well as a stand-alone book and I never felt lost or confused due to lack of backstory. The author gives readers enough to pique interest in learning more about ex-cop Michael McLaren, though. It seems there are juicy details to why he’s an ex-cop and not still in the force, and what’s the story with his girlfriend Dena? I’ll be adding the first two books to the ever-toppling TBR.

What becomes clear from the get-go is that Jo Hiestand excels at characterization, and with the apt narration of Steve Hart, I was already loathing a character within minutes of listening. OH! His condescension and patronization! Hiestand uses just the right words to describe scenes and people and evoke very specific responses from the reader. For those who are reading with their ears, the huge cast of characters and how they are related to one another can be confusing. New characters continue to be added up until very near the end of the book, and it seems everyone has a motive to murder. I recommend pulling out a notebook and playing detective yourself to keep track of who’s who.

Shadow in the Smoke is really a police procedural, and readers are right there beside McLaren as he gets information and puts the pieces together. It sometimes feels a bit too convenient that Michael has multiple connections at the police department who are willing to break the law in sharing classified information and documents. McLaren doesn’t hesitate to use it and even plays dirty with suspects as he tries to solve the case and protect himself as he becomes a target.

The story is heavy on dialogue, but it has some action that will pull readers out of rumination mode and into danger, right along with McLaren. And beneath all the sleuthing, there is also a sub-plot threading its way through the book that shows the sadness and loneliness of dementia. Having had a parent suffer through it, I found these scenes accurately heartbreaking, and the respect and tenderness shown by McLaren in dealing with Nora brought another dimension to his already complex character.

The story ties-up rather quickly, and admittedly, I was still scratching my head to figure out the convoluted known and unknown relationships between several characters. If I had the book in print, I would have probably pursued that so I could have it all straight -- especially because the final sentence only added more questions rather than providing a resolution to anything. Perhaps it tied up a loose thread, or perhaps it was a hint at things to come. Either way, I’m on board for more of Michael McLaren and this series.

ABOUT THE NARRATION:  The setting of Shadow in the Smoke is a little wiggly for this Texas girl; I think it’s set in England but I didn’t take the time to use the Google and look-up any of the towns mentioned to verify it. Narrator Steve Hart seems to have an Australian accent in portraying Michael McLaren, which is fine with me because it is a delightful accent, but I am not sure it was accurate for the character. Overall, his pacing is consistent, and it was easy to follow along listening to the audio at regular speed. The exception is that there aren’t appropriate pauses for segues to scene changes, which sometimes caused confusion. Even so, I wouldn’t hesitate to listen to him narrate another story. He performs both male and female voices well, uses a nice technique for when the dialogue occurred via telephone call, and his diction is clear – even with the multiple accents and unknown towns, I didn’t have any trouble understanding him in any character voice. Well done.

Thank you to Audiobookworm promotions and the author for providing me an audio book code in exchange for my honest opinion – the only kind I give.


I received this audio book as part of my participation in a blog tour with Audiobookworm Promotions. The tour is being sponsored by Jo A. Hiestand. The gifting of this audio book did not affect my opinion of it.

Jo A. Hiestand can usually be found at her computer, which is good, since she writes three mystery series. It seems a natural progression from her job as a graphic artist – crafting word images on a sheet of paper instead of creating graphics on the computer screen. Between the two computer stints, she lived in Britain for her semi-pro folk singing career and became friends with several English police detectives. The latter relationship was not a consequence of the former calling, however, but all these UK aspects find their way into her books. When not tapping on the keyboard, Jo enjoys reading, baking, and photography. She lives in the St Louis area with her cat, Tennyson, and way too many kilts.

After a number of years with commercial radio covering two continents, Steve Hart moved toward narration after being asked to perform his first novel in 2005. As it turned out, his story telling ability became stronger as each book and year passed. Steve considers narration an on-going study that even requires constant focus and the mindset of ‘always be willing to learn and grow.’

“Many people have an opinion on ‘how to read’ a book, but I believe there is only one way—you have to be in it! Immersed in the story and being the character(s) as they move through it. Projecting the emotion and bringing the whole story to life, while making it easy to consume for the listener.”

Mar. 11th:
B for Bookreview
4 the Love of Audiobooks