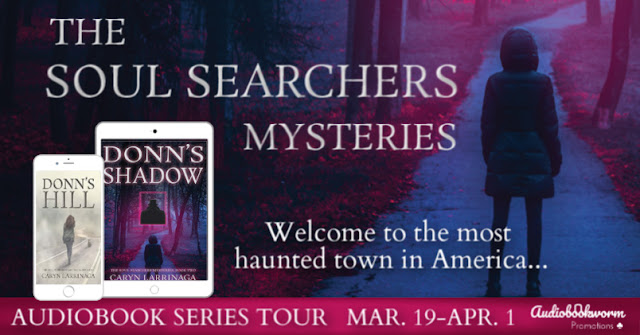 "Grief can change us... rewire our brains and shift the way we look at the world..."

After returning home from her father's funeral to find her boyfriend in bed with another woman, Mackenzie Clair is looking for a fresh start. She thinks she'll find it in her favorite childhood vacation spot, but returning to Donn's Hill awakens more than nostalgia. Mac regains a lost psychic ability to talk to the dead, and the poltergeist haunting her apartment is desperate to make her use that gift to find his killer.

Aided by her new roommate - a spirited tortoiseshell cat named Striker, and the ghost-hunting crew of the nationally televised show Soul Searchers, Mac struggles to learn how to use her powers. But she'd better get a handle on them fast because someone in town is hiding a deadly secret. If Mac can't somehow divine the truth, Donn's Hill will never be the same.

HALL WAYS REVIEW: AUDIO BOOK REVIEW: Donn’s Hill takes an interesting premise and runs with it. I was intrigued by the idea that grief and stress could trigger a long-time hidden psychic ability. Pairing that concept with a town that has an annual paranormal festival and houses the crew of a televised ghost-hunting show, readers are given a captivating and creepy story to enjoy.

“You have the air of someone who prefers words
on a page to the world around her.”

I knew right away that character Mac was my kind of gal. From the opening scene and her care of her Vonnegut book, to the remorse she feels after having to get rid of her books (and oh, how she misses them), to the excitement she shows when she discovers the new town has a bookstore, I connected to her. Add that the first place she visits (and frequently returns to for her caffeine fix) is the town’s coffee shop, and I felt Mac was one of my people.

“One thing was certain: I needed caffeine
to make sense of anything.”

Author Caryn Larrinaga gives readers snippets to begin sketching Mac’s character, but she fills-in the gaps so that Mac is a fully fleshed-out and complicated character by story’s end. Mac’s introversion is painful at times, as is her drive to handle things alone. As she becomes aware of her psychic gifts (curses?) and they are kicking into high gear, she caves inward. Even as she acknowledges to others that there’s a ghost in her apartment, she doesn’t share her experiences, with said ghost, with others. And she doesn’t share her struggle in knowing what’s real and what’s other-worldly. This was frustrating given the people she had access to, but maybe Mac’s hesitation is more than introversion? While readers get to know Mac, Larrinaga is less generous in giving us insight into other characters; we see the surface and we judge accordingly. This is intentional on the author’s part, and she does a great job of leading readers to conclusions that are often wrong (and often showing Mac’s intuition was right).

“My toes felt claustrophobic in my shoes. Sandal weather had arrived, and my narrow little piggies knew it.”

Larrinaga’s storytelling style is mostly straightforward; she doesn’t add a lot of flourish to her writing and is efficient but effective in describing scenes and vibes.  There are a few real gems that catch the listeners’ ears but mostly, she pulls readers into the story in a subtle way, relying heavily on dialogue. She slowly, masterfully builds the dread, then piles on some intense action that will have readers sitting up straighter – and maybe looking over their shoulders a bit.

Donn’s Hill has a satisfying resolution without any cliffhangers, but the ending does set the stage for what I imagine is a plot point in the next book in the series, Donn’s Shadow. With Mac’s job and abilities, the door is wide-open for plenty of ghostly adventures, danger, and maybe even a romance in the works. I’ll be checking out the next book to find out.

ABOUT THE NARRATION: Jessica McEvoy does a great job performing voices both male and female and characters with a variety of accents. Her delivery is even, but the pace is a little slow for me, so I bumped it to 1.25x after about an hour of listening at regular speed. McEvoy’s enunciation is so precise that it is a little distracting because most people don’t speak that clearly. The result is that it draws attention to the words instead of to the story. However, by the end of the book, McEvoy’s clear articulation became another aspect of Mac’s personality, and I can’t imagine another person voicing her.

Thank you to the author and Audiobookworm Productions for providing me an audio code in exchange for my honest opinion – the only kind I give.

I received this audio book as part of my participation in a blog tour with Audiobookworm Promotions. The tour is being sponsored by Caryn Larrinaga. The gifting of this audio book did not affect my opinion of it.

Caryn Larrinaga is a self-described horror evangelist and paranormal junkie. Her debut supernatural mystery novel, DONN’S HILL, won the League of Utah Writers 2017 Silver Quill Award in the adult novel category and was a 2017 Dragon Award finalist. Her short fiction has won multiple honors and been featured in local and international anthologies. Watching scary movies through split fingers terrified Caryn as a child, and those nightmares inspire her to write now. She lives near Salt Lake City, Utah, with her husband and their clowder of cats. Visit www.carynlarrinaga.com for free short stories and audio books.

Between peddling video games and teaching yoga in her home state of Arizona, Jessica McEvoy attempts to conduct a career as a professional voice actress. This, however, is moderately undermined by the fact that she records in a dimly lit closet with her microphone balanced on a stack of old board games (Junior Scrabble and Powerpuff Girls Monopoly form a strong foundation), but she hopes that no one holds that against her.

Though her main work consists of narrating audio books, her first dive into the voice world was through the NoSleep podcast after answering a post from the LibriVox forums. Having been raised on horror movies and scary stories, she was beyond excited to be able to work on the show. Many stories, tortured screams, deranged villains, and creepy little girl giggles later, Jessica hopes to work on the podcast for seasons and seasons to come. Connect with Jessica on  Twitter

Plugging you into the audio community since 2016.
Sign up as a tour host here.
Posted by Kristine at 2:00 AM