Come Back to the Swamp ~ Audio Book Blog Tour Review! 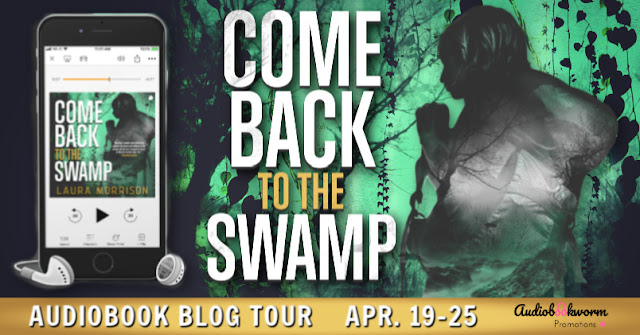 Working on completing her ecology graduate degree, Bernice is doing invasive species research in Cleary Swamp when she is confronted by a mysterious hag who says she is the swamp’s caretaker. When Bernice discovers that the hag is actually a woman named Rebecca Hallett who disappeared in the swamp decades before, she attempts to remove the strange old woman from Cleary Swamp. But little does Bernice know that Rebecca has a mystical bond to the area - one that possesses a human host and bonds them to it. One magical hallucinogenic powder cocktail and a space opera spirit journey later, Bernice’s life has changed forever. The swamp wants her for its new caretaker, and it won’t take no for an answer.

HALL WAYS REVIEW: Audio Book Review. I knew from the initial and thorough analogy that had main character Bernice fighting an invasive species of weeds as if she were fighting in battle that I was going to enjoy this story. And to take it next level, it isn't just any battle she's fighting, she compares her Japanese barberry battle to Arigorn's battle to save Middle Earth (Lord of the Rings) and even names her hedge clippers Andúril and Sting! Bernice speaks my language with things being "dorky" and technology being stupid. The result is just minutes in to the story, author Laura Morrison has created a character in whom I am fully invested.

Coming in at about three and a half hours on audio (140 pages in print), Come Back to the Swamp is a light, fun, and fantastical reading escape novella. There are really only three characters to keep up with, and the majority of the story is told from Bernice's point of view, so the story is ideal if you have to listen while multi-tasking. Bernice is both irritating and endearing in her flaws and self-realization of them, which makes her real and relatable.

The premise that the swamp selects a human host with which to bond is fascinating.  That any harm done to any element within the ecosystem -- like chopping down vines -- manifests itself by causing physical pain to the host is a bigger picture reminder that there are consequences to human behaviors. Also enjoyable is that in Come Back to the Swamp, it is the swamp that ultimately controls the humans, and not the reverse.

As the book's description references, there is a "hallucinogenic... space opera spirit journey" that occurs in the story, and this is the story's shortcoming. There is so much that could have been done with those elements, but instead of providing a few more pages of explanation, it's brevity and disjointedness is discombobulating and creates gaping holes and questions. It felt like an attempt at a quick out -- that in having something so outlandish to account for a time period, readers wouldn't need answers.

Thankfully, as the story distances itself from that strange episode, the plot gets back on track and is engaging once again. And while there are logistical questions that don't get answered, those become less important as the story builds to its resolution.  The epilogue gives a satisfying, though mildly confusing explanation (here, reading text might have made it easier to understand) and ends with just a touch of eeriness as a bonus for the ending. I would definitely explore other titles by this author because of her gift for characterization and imaginative plots.

ABOUT THE NARRATION: Narrator Chelsea Stephens provides an outstanding performance of the story. Whether voicing a male or a female, a hag or nature itself, she keeps each voice unique and uniquely expressive. Her delivery is even and her pacing perfect so that I was able to listen to the audio at regular speed. The audio has no technical issues and provides for a smooth, enjoyable listening experience.

Thank you to Audiobookworm Productions and the author for providing me an audio download in exchange for my honest opinion -- the only kind I give.

I received this audio book as part of my participation in a blog tour with Audiobookworm Promotions. The tour is being sponsored by Black Spot Books. The gifting of this audio book did not affect my opinion of it.

Laura Morrison lives in the Metro Detroit area. She has a B.S. in applied ecology and environmental science from Michigan Technological University. Before she was a writer and stay-at-home mom, she battled invasive species and researched turtles.

Chelsea Stephens has a long time love and appreciation for the performing arts, with experience in on-stage acting, singing, and voice over. Her love for reading books and the pursuit of the story led her to narration. She enjoys unfolding characters and bringing listeners into new worlds. Chelsea is an award-winning voice actor with a talent for mystery, sci-fi, romance and YA novels. She’s a mom to a gaggle of young ones living in the Midwest.
Website⎮Twitter⎮Facebook⎮Instagram