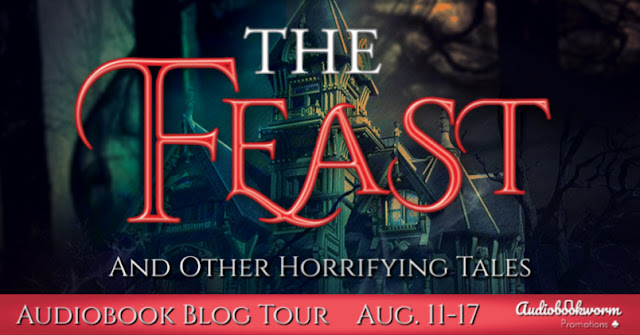 The Feast is a collection of short stories that take place on different holidays over the course of the year. The collection opens with "A New Year, a New Day, a New Life." Grant Curtis is arrested on New Year’s Day and charged with the murder of his wife Carla.

In "Easter: The Resurrection," a resurrected Kyle Gardner seeks vengeance on Pastor Brian.

"The Vengeance of Cassidy Clay" is a narrative poem that takes place on Halloween. The poem tells the story of a slave-hunter who haunts the woods long after his death. Plus many more spine-chilling tales.

HALL WAYS REVIEW. AUDIO BOOK REVIEW. In The Feast: And Other Horrifying Tales, author David Vorhees takes readers through seven short stories themed around the year’s major holidays, telling stories of the most macabre nature.  The word “horrifying” in the title is apropos; these stories go for the shock factor with some prompting an “oh-no-he-didn’t-go-there” response from this reader.

Most of the tales are deeply disturbing and be warned: you won’t be able to unsee them. This is a nod to the effectiveness of the author’s storytelling ability and gift for description. Mercifully, Vorhees chose to tell, not show readers what was happening, and I thank him for that. My imagination fleshed-out (pun intended) the rest. Narrator Victor Warren’s performance perfectly complements each story, making them more memorable – even when you want to forget.

Going through the calendar year of stories loosely centered around major holidays gives structure to the collection, the stories varying in length from as short as eight minutes to as long as nearly an hour and a half.  The variety in story lengths is a plus because it keeps the listening from being monotonous. And since the whole book comes in at just under four and half hours, I listened straight through and was never close to being bored.

Three of the stories are top notch. “A New Year, A New Day, A New Life” (about 20 minutes) brings to mind Edgar Allan Poe’s The Tell-Tale Heart. The main character’s transition from control to madness is palpable. Halloween’s “The Vengeance of Cassidy Clay,” the shortest story at only 8 minutes, is told in verse, and is probably my favorite (and least graphic). It’s reminiscent of Washington Irving’s The Legend of Sleepy Hollow, and it would lend itself nicely to being told around a campfire. “Thanksgiving” (around an hour long) could have come straight out of a Tales from the Crypt episode, with the dread and tension masterfully building to the big, horrifying reveal. Yeah, we know what’s coming, but we can’t stop it. A fourth story, “Easter: The Resurrection,” the longest story in the collection, also deserves mention for the intricacies of the plot and how the need for revenge can motivate and twist the brain.

Two of the stories crossed the line for me, and several of the stories included sickening details that felt gratuitous.  Overall, the stories in the collection seem frighteningly realistic in this often-perverse world we live in. Readers who enjoy horror and have strong stomachs for gore and violence will find lots to like in The Feast: And Other Horrifying Tales. For those who are nitpicky (like me) about cleanly edited books, I recommend this one for reading with your ears instead of your eyes as the print version needs a heavy proofreading.

ABOUT THE NARRATOR & AUDIO PRODUCTION:  As mentioned, narrator Victor Warren’s performances of the many characters in The Feast are well-done and the perfect complement to Vorhees’s writing. He tackled a wide range of emotions and accents and convincingly voiced the females. His pace was a bit slow for me, so about an hour in, I bumped the speed to 1.25x, and that was perfect. I would absolutely seek out other titles he narrates. Production wise, the audio book is mostly clean and professionally recorded, though there was a big glitch in “Fourth of July” where an entire chapter was repeated.

I received this audio book as part of my participation in a blog tour with Audiobookworm Promotions. The tour is being sponsored by David Vorhees. The gifting of this audio book did not affect my opinion of it.

David Vorhees joined the U.S. Navy after graduating Lima Central Catholic. He is a veteran of the United States Navy. Following his military service, he attended the University of Northwestern Ohio for automotive business and worked various factory jobs and attended the University of Phoenix online for a degree in arts with a focus in journalism. He recently worked for the Wapakoneta Daily News as a reporter/photographer/paginator. He is the father of five and grandfather of five. He has always been interested in the occult and the scarier side of life. He loves history and the supernatural and truly believes there is nothing better than a good story.

A native Californian, Victor Warren has been acting since the age of ten. He is a graduate of Carnegie-Mellon University where he majored in acting and directing. After graduation, Victor worked in California for over fifteen years for Universal Studios as a director, camera operator, technical director, announcer, and stunt show performer. Victor then moved to the east coast where he works successfully as a director, actor, writer and producer. He is currently living on Cape Cod and is bi-coastal flying in where the work leads him. He is an award-winning director/writer and with the creation of his production company Glydascope, he plans to continue to expand his creative properties. Recently The Feast is his very first audio book, which he narrated and produced through Glydascope. He recently (2018) can be seen as the irritated police Sergeant O'Connor in My Daddy's in Heaven and as Stephen Smith in Chappaquiddick. He is currently working on his fourth book for Audible, and working on a short film that he is producing and acting in called Another Life.