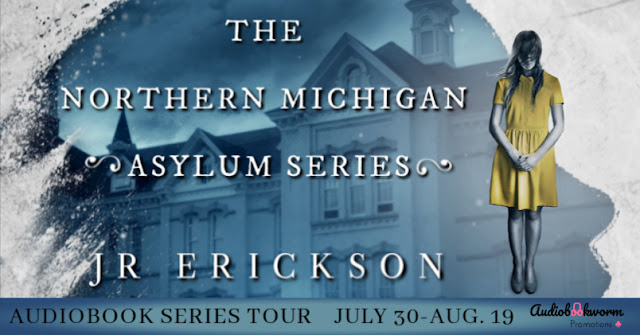 The dead have stories to tell. Are you listening?

On a sunny August morning, in 1935, 13-year-old Sophia Gray finds her friend Rosemary wandering in the woods. Rosemary’s yellow dress is tattered and stained, she walks with a strange lurch, and her eyes are vacant and glassy. She beckons to Sophia, desperate to show her something, and Sophia follows.

In an abandoned cabin, beneath a tattered blanket, Sophia discovers Rosemary’s body. It was not Rosemary who led her there, but Rosemary’s ghost.

Step into the Northern Michigan Asylum for the Insane

Twenty years after Sophia discovers Rosemary’s body, she finds herself trapped in the sprawling, and eerily beautiful, Northern Michigan Asylum for the Insane, in the hands of a malevolent doctor who preys on patients who exhibit paranormal abilities.

In 1965, Hattie, much like her mother, 30 years before, is led by a ghost. A newspaper hidden in an attic reveals a secret that has shaped the lives of Hattie and her siblings. Hattie with her sister, Jude, embark on a crusade to remedy the wrongs of the past and discover the tale of deception that stole their mother a decade before.

Hattie and Jude are in a race against time to discover a murderer and save their mother from a horrific fate.

Get lost in a uniquely chilling story that spans the life of a family and the ghosts who haunt them.

HALL WAYS REVIEW: Audio Book Review. Some Can See by J.R. Erickson, narrated by Allyson Voller, is the first of a series of books in the Northern Michigan Asylum novels. While that premise alone promises high interest reading, Erickson adds in a paranormal element and a wide cast of peculiar characters that will keep the audience engaged.

Interestingly, there is an Author’s Note at the beginning of the book that explains that there was a real asylum that existed and that its existence was the inspiration for the stories. Though author J.R. Erickson makes it clear that the stories and characters are 100% fiction, there's still something delicious about the "what ifs" of that setting given what history tells us was common practice within institutions like that.

The author’s strength is in her ability to vividly describe scenes and people so that they pop to life. Additionally, she comes up with imaginative situations and complications that were reminiscent of VC Andrews books. Unfortunately, the plot holes, unnecessary characters and scenes, and unexplained actions detracted from my enjoyment. There are eight books in this series so far, and they are each stand-alone books with fabulously enticing covers that may just tempt me to read one of the later iterations to see if the writing has gotten tighter. Nonetheless, if you just want to be entertained, Some Can See delivers that in aces.

While Allyson Voller’s narration was fine, I would recommend having a print copy handy for reference. There are multiple timelines in Some Can See, and the pattern did not quickly emerge. Add to that the multiple points-of-view, multiple characters, and multiple settings, it is somewhat confusing. However, there is enough meat and mystery to the story that readers will want to stick with it because eventually, those timelines and storylines converge, and a wickedly good story reveals itself.

A word of caution: this book has a bit of profanity, including a lot of F-Bomb drops. I don’t like reading it but deal with it, but I really don’t like hearing it or worse -- for anyone else to have to hear it when I’m listening to a book. You’ve been warned (wish I had been).

ABOUT THE NARRATION: Voller’s pacing was perfect for me so that I was able to listen at regular speed and not feel compelled to get her talking faster. She clearly enunciates and gives even delivery. Given the bouncing timeline and changing POVs, it would have helped if she had paused more in the transitions and/or changed her voice to signal the switches. Some characters are uniquely voiced and really stand out, but others are less distinct from one another. I would have liked more of the former to add another layer to the story, but overall, the narration complemented the story instead of overtaking it, and that’s a win-win.

Thank you to Audiobookworm Productions and the author for providing me an audio download code in exchange for my honest review – the only kind I give.

I received this audio book as part of my participation in a blog tour with Audiobookworm Promotions. The tour is being sponsored by J.R. Erickson. The gifting of this audiobook did not affect my opinion of it.

J.R. Erickson (aka Jacki) is an indie author who writes murder mysteries woven with elements of the paranormal. Since childhood, J.R. has been fascinated by otherworldly things. She started penning creepy stories in her adolescence, but didn’t pursue a career in writing until her mid-twenties. Like most paths, J.R.’s has been winding and filled with detours.

Today, she lives in the forests of northern Michigan with her excavator husband and her critter-loving son. In addition to writing, J.R. teaches yoga, hosts the true crime podcast Bitter Endings, and spends every spare minute hanging with her family and her kitties.
Her latest series, the Northern Michigan Asylum Series, is inspired by a real former asylum in Traverse City. J.R. regularly visits the former asylum that has been partially renovated into shops, restaurants and condominiums.

Allyson is an accomplished actor with a fun, versatile style. She’s been working professionally for more than two decades in Chicago’s theatre and improv community. Her body of work appears in hundreds of projects in all mediums: film, television and commercials, both in front of the camera and behind the microphone. Allyson’s love of performing led her into narrating audio books and she has never looked back. She has a degree in theatre, as well as having studied improvisation at both The Second City Conservatory and iO Chicago. In addition to narrating audio books she lends her multifaceted voice to the country’s oldest running radio drama as a company member.