A chance meeting with a charismatic photographer will forever change Elizabeth’s life. Until she met Richard, Elizabeth's relationship with Georgia O’Keeffe and her little-known Hawaii paintings was purely academic. Now it’s personal. Richard tells Elizabeth that the only way she can truly understand O’Keeffe isn’t with her mind―it’s by getting into O’Keeffe’s skin and reenacting her famous nude photos. In the intimacy of Richard’s studio, Elizabeth experiences a new, intoxicating abandon and fullness. It never occurs to her that the photographs might be made public, especially without her consent. Desperate to avoid exposure―she’s a rising star in the academic world and the mother of young children―Elizabeth demands that Richard dismantle the exhibit. But he refuses. The pictures are his art. His property, not hers. As word of the photos spreads, Elizabeth unwittingly becomes a feminist heroine to her students, who misunderstand her motives in posing. To the university, however, her actions are a public scandal. To her husband, they’re a public humiliation. Yet Richard has reawakened an awareness that’s haunted Elizabeth since she was a child―the truth that cerebral knowledge will never be enough. Now she must face the question: How much is she willing to risk to be truly seen and known?
BUY THE BOOK:
Amazon ~ B&N ~ BAM
Bookshop ~ Kobo ~ indiebound
Book Depository ~ Powells
Add to Goodreads
⬬⬮⬬⬮⬬⬮⬬⬮⬬⬮⬬⬮⬬⬮⬬⬮⬬⬮⬬⬮⬬
Guest Post:
Why there are no owls in Queen of the Owls
by Barbara Linn Probst

When I published Queen of the Owls and started talking with readers, people inevitably asked, “Where did you get the idea for the story?” It’s a natural question. So why was I having such trouble answering it?

I finally understood that it was because there were so many answers. Here are three of them.

#1. Panic. I’d signed up for an expensive year-long writing program that was meant to guide and support us through the process of completing a novel, start to finish. The problem was that I came home from the first all-day session and realized that I had no story. The story I’d intended to use for the program was, in a word, crap. It was my latest attempt to resurrect a manuscript that hadn’t worked the first four times I tried, but I hated to throw it away. I was hoping for a magic do-over that would turn this pig’s ear into a silk purse.

But it was obvious, finally, even to me. I sent the instructor a frantic email with eight exclamation marks in the subject line after the words: Help! I have no story.

She—and other well-meaning friends—offered prompts and ideas. Open the newspaper at random. Pick an object and imagine the person it belonged t. Et cetera. Nada. That wasn’t my way of finding the story I needed—or, rather, the story that needed me.

All I can tell you is that out of this pit of desperation, Queen of the Owls found me.

#2. Bill Kingery, my seventh grade heartthrob. When I was a too-tall, frizzy-haired, twelve-year old A student, I asked my best friend to ask Bill Kingery what he thought of me. His words crushed my adolescent heart. “Barbara? Oh, she’s a brain.”

Thus was born my decades-long question about whether I was doomed, as a woman, to be either sexy or smart, fox or owl. It took me a long time to understand that I could be both. And that’s what Elizabeth, protagonist of Queen of the Owls, must come to understand too.

#3. The flat-screen TV my ex-husband took. When my ex and I split up—ten years before I started writing Queen of the Owls—he took the great big flat-screen TV that he’d mounted over the fireplace. I was almost as glad to see that thing go as I was to see him go. I’d always hated the way it—like him—dominated the living room.

I wanted to put something in its place that symbolized the woman I wanted to be now, so I went to an art store and flipped through the oversized posters in the rack. As soon as I saw those glorious orange poppies, I knew this was the image I wanted on the wall to fill the space and proclaim: Here I am. Bold and beautiful and womanly.

I hadn’t particularly thought about the artist who was, of course, Georgia O’Keeffe. I simply lived with the poster. It wasn’t until a decade late—in a different home, doing a Zoom interview for Queen of the Owls with that very poster on the wall behind me—that I suddenly made the connection.

There are other reasons that I don’t have space for. The #MeToo Movement, which influenced the plot. A discarded bit from that old manuscript that stayed with me and bloomed into an evocative story element. A weird coincidence or two.

You’ll notice that none of the answers has to do with owls.

The second most frequent question I get asked is, “When did you start getting interested in owls?”

The answer is: I’m not. There are no owls in the book, nor are there any queens. But if you read Queen of the Owls, I think you’ll understand the meaning of the title.
It’s about me, and you, and how we can be the whole and authentic women we’re meant to be.
⬬⬮⬬⬮⬬⬮⬬⬮⬬⬮⬬⬮⬬⬮⬬⬮⬬⬮⬬⬮⬬ 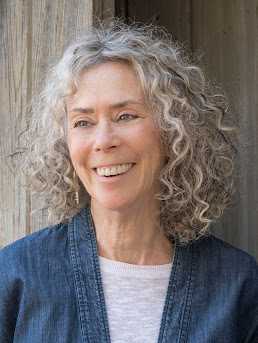