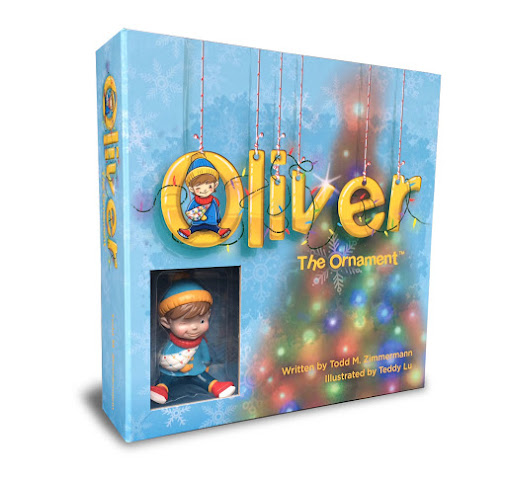 Oliver the Ornament is a heartwarming tale of one family's cherished Christmas ornaments. The story centers on Oliver, who has been with this family since Mom and Dad's very first date. Years later, Oliver, now injured and bullied, still has the magic of Christmas in his heart. "The story follows Oliver's excitement for Christmas, his heartbreak, and his determination to overcome all odds to save the day. Oliver, along with his friends, will warm your heart with his kindness, humility, and love for his family and friends. We hope the story will bring families together to tell the stories of their own ornaments and the special meaning that so many of them possess. Because after all, "Every Ornament Tells a Story."


Guest Post:
AUTHOR TODD ZIMMERMAN TALKS ABOUT WRITER'S BLOCK
Do you ever get writer’s block? What helps you overcome it?

Yes, after I completed Oliver the Ornament Meets Belle, which is second book in my seven-book series, I knew something was missing, but I didn’t know what. For weeks, I read and re-read the book knowing something was wrong but unable to pinpoint what the issue was. Finally, I realized there was no villain in the story. We have three villains (bullies) in the first book, but they reform by the end of the story, so I couldn’t have them revert to their old ways. As we all know, every children’s story has a villain, so I had to come up with a new character. And that’s exactly what I did, with the introduction of a new ornament in book two.
The new character, named Nellie turns out to be an ornament, who was left behind in the attic decades ago, and is now determined to ruin Christmas for the entire family (don’t worry, though, because Oliver, with the help of his friends will always save the day!). Ironically, the writer’s block ultimately opened the door for this brand-new twist in the story and the introduction of this new character who will take on a major role in all subsequent books in the series. Who knows, Nellie might even get her own book...
Meet the Author:
Todd Zimmermann, the creator and author of the “Oliver the Ornament” series, is on a mission to spread kindness and anti-bullying messages within his charming stories. The first story in the series focuses on a little ornament who faces challenges, but is able to overcome all odds to save the day. Charity is at the heart of Oliver the Ornament. A portion of proceeds from the sale of each book will be donated to various children’s charities. Starting with 5% from the first book, 10% from the second book, and increasing to 100% of the seventh book, Oliver the Ornament is committed to making a difference in children’s lives throughout the world.

ONE WINNER: Autographed copy of Oliver the Ornament
(US Only. Ends December 28, 2020)