In 1968, two young Vietnamese sisters flee to Saigon after their village on the Mekong River is attacked by American forces and burned to the ground. The only survivors of the brutal massacre that killed their family, the sisters struggle to survive but become estranged, separated by sharply different choices and ideologies. Mai ekes out a living as a GI bar girl, but Tam’s anger festers, and she heads into jungle terrain to fight with the Viet Cong.

For nearly 10 years, neither sister knows if the other is alive. Do they both survive the war? And if they do, can they mend their fractured relationship? Or are the wounds from their journeys too deep to heal? In a stunning departure from her crime thrillers, Libby Fischer Hellmann delves into a universal story about survival, family, and the consequences of war. 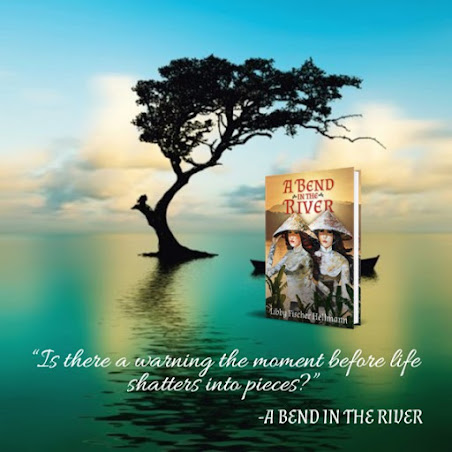 HALL WAYS REVIEW: Audio Book Review. The Vietnam War started more than a decade before I was born, and I have vague recollections of the final years before it came to an end. Of course I have learned more over the years, with what I have learned having a decidedly American slant to it.  A Bend in the River begins in 1968, when I was just a year old, and it provides an entirely different, thought-provoking perspective.

“She watched flames devour the huts like they were hungry.”

Author Libby Fischer Hellmann’s descriptions – whether of the destruction of a village or the crumbling of a person’s soul – is outstanding. Readers are quickly put into the scenes and the minds of the characters, sisters Tam and Mai.  Though the sisters seem to have little in common, they are both resilient, resourceful, and strong women who are survivors, at all costs. It’s heartbreaking to watch their journeys, which take them in separate directions, but it’s also rewarding to watch them grow and learn and eventually forgive. I found many parallels between A Bend in the River and Kristin Hannah’s The Nightingale – which is nothing but good news for readers.

From a historical perspective, it’s clear that Hellmann has done her research. As an American, I felt embarrassed, ashamed, and uncomfortable to not only observe the atrocities of our soldiers, but to feel them via the characters in A Bend in the River. Add to that the pain of experiencing the atrocities of the Communists, via Tam’s perspective as she fights with the Viet Cong, the war is horrifyingly real. Tam is constantly reminded of the real people, the innocent people that her actions and allegiances directly or indirectly affected. We’re all reminded that in war, there are no winners.

ABOUT THE NARRATION. Narrator Robin Rowan takes this story to the next level with her precise and excellent performances of a wide cast of characters. She knows the nuances and inflections of the Vietnamese language, so listeners have an authentic listening experience. This narration coupled with Hellmann’s prose are a perfect pairing to provide a complete immersion into the story and lives of Mai and Tam. While it’s a challenge for those of us not familiar with Vietnamese to remember the names, words, and places, the story would lose much of its luster without them. (I intend to get the book in print since reading with my eyes tends to make words foreign to me stick.)

Thank you to the author and Audiobookworm Promotions for providing me an audio download in exchange for my honest opinion – the only kind I give.

I received this audio book as part of my participation in a blog tour with Audiobookworm Promotions. The tour is being sponsored by Libby Fischer Hellmann. The gifting of this audiobook did not affect my opinion of it.

Libby Fischer Hellmann left a career in broadcast news in Washington, DC and moved to Chicago over 35 years ago, where she, naturally, began to write gritty crime fiction. Fifteen novels and twenty-five short stories later, she claims they’ll take her out of the Windy City feet first. She has been nominated for many awards in the mystery and crime writing community and has even won a few. She has been a finalist twice for the Anthony and four times for Foreword Magazine’s Book of the Year. She has also been nominated for the Agatha, the Shamus, the Daphne, and has won the IPPY and the Readers Choice Award multiple times. Her novels include the now five-volume Ellie Foreman series, which she describes as a cross between “Desperate Housewives” and “24;” the hard-boiled 5-volume Georgia Davis PI series, and four stand-alone historical thrillers set during Revolutionary Iran, Cuba, the Sixties, and WW2. Her short stories have been published in a dozen anthologies, the Saturday Evening Post, and Ed Gorman’s “25 Criminally Good Short Stories” collection. Her books have been translated into Spanish, German, Italian, and Chinese. All her books are available in print, ebook, and audiobook. Libby also hosts Second Sunday Crime, a monthly podcast where she interviews bestselling and emerging crime authors. In 2006 she was the National President of Sisters in Crime, a 3500 member organization committed to the advancement of female crime fiction authors.

Robin is a voiceover veteran with more than three decades of experience, beginning in radio in the 1970s. Her voice is warm, low and rich, perfect for healthcare and documentaries. She also has narrated more than 70 audio books, so she has extensive experience with different voices and accents.  Facebook⎮LinkedIn