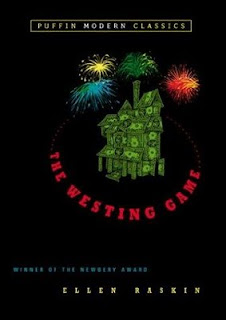 Raskin, E. (2003). The Westing game. New York, NY: Penguin Group.
LS5360 Newbery and Notable. Again, swiped from my son's library (he had to read it for an English class), I enjoyed it, but I was too impatient to think it through and try and figure out the mystery. Perhaps if it had been leisure reading at a leisurely pace, I would have liked it more.

Exposition: Reader’s are immediately told that the setting is in the outskirts of Westingtown, Sunset Towers, an apartment complex on the shores of Lake Michigan. It is modern times, and the main characters – the future Westing heirs - are introduced as they are shown and lease apartment units made just for each of them.  They are: Grace, Jake, Angela, and Turtle Wexler; Mr., Madame, and Doug Hoo; George, Catherine, Chris, and Theo Theodorakis; Judge Ford, Crow, Sydelle Pulaski, and Flora Baumbach. The narrator, in third person omniscient point-of-view, reveals that one tenant steals, one sets off bombs, and one isn't even supposed to be there in the first place.  The majority of the future Westing heirs are invited to live in the newly built Sunset Towers, which is situated near the seemingly abandoned house of Sam Westing, owner of the Westing Paper company.
Conflict: On Halloween, Turtle Wexler is dared to go into the Westing house, where she sees a dead body. The next morning, she reads the obituary for Sam Westing, of the Westing estate and Westing Paper Products, in the newspaper.
Rising Action:  The sixteen heirs of Sam Westing's will, all tenants of Sunset Towers, are invited to play a game that will solve the mystery of which heir among them took Westing's life.
Climax: After all the heirs get their answer to the Westing game wrong, doorman Sandy McSouthers dies and Berthe Erica Crow hands herself in to the police for murdering Sam Westing. Through Turtle Wexler and Judge Ford, the other heirs find out Sandy was actually Sam Westing, Crow his long-estranged ex-wife, and that Westing died of a heart attack, thus freeing Crow of any blame.
Falling Action: The last part of the will is read and there is no mention of money, only that all the players get shares in Sunset Towers.  The judge declares that no one won the game as they watch the Westing House explode.
Resolution: Turtle Wexler figures out the true game of Sam Westing's will and that he still is not dead but assumed the guise of Julian Eastman, Westing Paper's recently elected chairman. Later that night, Turtle goes to Eastman's house,  addresses him as Sandy, and says she won because she’s found the fourth identity of Westing.  Turtle wins the Westing game and becomes the secret heir of the Westing fortune.  Several years later, Turtle stays with Sandy/Westing (as Eastman) while he really dies. She finally wins the prize.
and goes to play chess with her niece Alice.
Literary Elements:  Foreshadowing and symbolism are prominent in the book.  The story of Sam Westing, dead on an Oriental rug, is an intentionally repeated image, as is the continued recurrence of the “limping person” seen entering the Westing house before Sam’s Westing’s death.  It is clear that both of these events are important and that the reader should hang on to them for future reference. The most obvious and notable symbol in the book is Sam Westing’s will.  It represents many things: the inheritance, the rules, power, legacy, regret, righting wrongs, and more.
Posted by Kristine at 2:47 PM