John Lennon: All I Want is the Truth 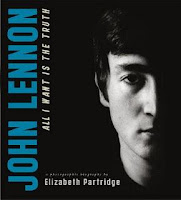 I will admit that I only chose this biography because it was available at the library. I have always enjoyed the Beatles music, but it was not to the point of obsession by any stretch.  I own only the Beatles "One" album, which was produced long after they broke up.

In any case, I did enjoy reading the book and found myself amazed that the Beatles stayed together and functioned as long as the did with the rampant drug use.  Unbelievable.  It is definitely not sugar-coated in the book, and it's really something that Lennon was able to write and perform when he was so blitzed on drugs for so much of the time.

It is clear Lennon was a troubled soul from the time he was very young and despite the efforts of his aunt to keep him on the straight and narrow.  After reading the book, I am not sure how I feel about John Lennon. The words selfish and spoiled come to mind.  Talented, yes, but really insensitive to the people who most loved him.  Was his talent so important that his racial slurs and mockery of handicapped people were to be tolerated?  Give me a break.  I wonder if it would have been tolerated today.

Much of the book, naturally, was dedicated to the Beatles and the various members coming together and falling apart.  I learned a lot about the Beatles and especially that the image projected to the world was not really who they were at all. It was pure marketing.

The book was well-done, and the pictures were great, but if the intent was to respect and/or adore John Lennon, it missed its mark.
Posted by Kristine at 11:00 AM