What Have You Lost? 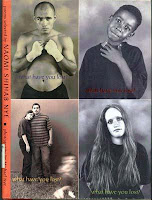 I have to admit, this whole genre makes me nervous.  Other than poems by Shel Silverstein and books of dirty limericks, I've never been big on poetry.  Yes, there were the select, choice poems to which I'd been exposed over the years, which stuck with me and which I enjoyed.  Honestly, I don't think I have a single poem memorized.  Lines, yes, but not one full poem.  To quote Austin Powers, "It's not my bag, baby."

We had four choices of books of poetry for the class I'm taking, three of which were available in my local public library. I read Betsy Franco's compilation, You Hear Me?, which was poems written by teenage boys. Not quite as painful as it sounds - there were a few jewels - and it's counterpart, Things I Have to Tell You: Poems and Writings by Teenage Girls, just seemed too much. Alas, What Have You Lost won by default.  Again, I was nervous thinking I would be totally depressed by reading only about loss.

I must say that I don't believe books of poetry are meant to be read in one sitting or even within any kinds of time frames at all.  There is simply not enough time for anything to sink in.  This was okay for much of the book, as I didn't care to ever think about or read many of the poems again; however, the book is not all about loss in terms of things mourned.  Some poems were about the loss of negativity, fear, immaturity, and other emotions/character traits that are best left behind.

As a mom, I particularly liked the poem titled "Teenagers," by Pat Mora.  It was such a true and accurate glimpse of how one day they go into their rooms and basically come out a different person several years later. Reading Chris Pealer's "Devotion" reminded me of how much I enjoy good, figurative language: "Cold drips from trees like rain."  Renato Rosaldo's "Invisibility" struck me with its description of how society ignores the immigrant workers in this country.  And Jennifer Weinblatt's "On the Suicide of a Young Boy I Did Not Know," was reminiscent of how I often feel in reading about other people's tragedies.

The book really was about loss, but it was loss as viewed from many different perspectives and written about in many different styles.  There were also black and white photos scattered throughout the book that spoke volumes without any captions at all. (though I would have liked to have known their stories, too.)

One of the most interesting parts of the book was the section at the back with notes about the contributors.  Also, there were three indexes: Index to Losses, Index to Poems, Index to Poetry.  Very useful if you needed to search that way.  Another interesting facet was that the table of contents looks like a poem, and the title of the book was stamped, in a about a 1 1/2" tall rectangle, randomly and in varying places throughout the book.  No purpose in these two facets other than aesthetic and to tie-in with the motif of the book.

I'm not sure I'll read a book of poetry again any time soon, and I won't have a problem returning this book to the library, but I'm glad I read it.
Posted by Kristine at 12:00 PM