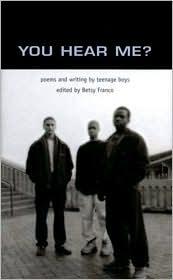 With the exception of the profanity - there was one poem that dropped the "F" bomb in pretty much every sentence - none of the above listed offenses were really heavy issues in the writing.  They may have been referenced, but the topics with a few exceptions, were not covered in an explicit way.  They were musings, reflections, rantings and ventings on love, hate, fear, hope, frustration, anticipation, disappointment, celebration . . . you name it. And some were quite insightful.

Honestly, I was pretty surprised by the writing.  I expected a lot more profanity and anger. Of course, Franco decided what was included, and kind of clustered like writings together so there was a smattering of writing for each of several topics: grief, love, lust, drugs, belonging, isolation. . .

Even the "F-bomb" poem (creatively titled, "I Hate School") made its point and even got a giggle out of me with this line, "Inspirational posters on the wall -- why won't that kitty f*****g fall?" We all KNOW that poster, which I believe says something like "Hang in there!"  The kid is just clearly fed-up with the ironies and hypocrisies he sees in school.

There were only a few stand-out poems that were really well-written and whose authors clearly had some talent.  Nonetheless, I think it's something that many teenagers could read and nod their head and say, "me too," or "aw, I hadn't thought of that in that way."   Perhaps reading these poems will make someone feel validated or not so alone or empathetic.  Whatever the case, it will make the readers feel something and that is a good thing in my opinion.