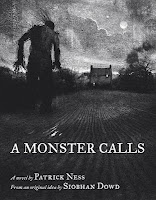 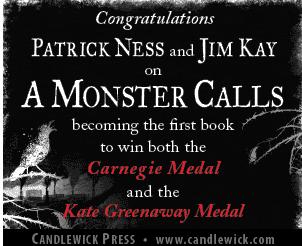 WOW. Did I say WOW already?  Two times is not enough. I didn't really know what I was getting into when I decided to read this (on my iPad, by the way. I am becoming so techy).  I knew it had won lots of awards and had many recommendations, but that was about it.

This story was very powerful and so well written that I pretty much read it in one sitting.  I was absolutely drawn-in to thirteen-year-old Conor's life; he is dealing with divorce, dying, bullying, isolation, fear, anxiety, and so much more, but he deals with it.  He is a reminder of what kids can deal with when they have to, and how strong and also fragile they are when they are so burdened.  I am not a bit embarrassed to say that I had myself a good cry at the end. I cried for loss and for love and for letting go and who knows what else. Heart-breaking, but definitely worth the tears to read a book so well-done.

At times, this book reminded me of another favorite, the graphic novel, The Savage, where a boy has to deal with many of the same issues.  Ness apparently wrote the book for another author, Siobhan Dowd, who created the premise but then died at a young age before being able to pen the story.  Ness did an amazing job, and accompanying the text are some awesome, dark and creepy illustrations by Jim Kay that are the icing on this very inventive story.


Here is the trailer released by Candlewick Press -- enjoy, and read this book!