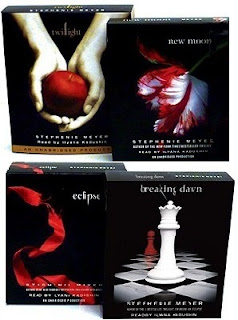 I gagged my way through Twilight last year when it was required reading for one of my classes.  I decided that I would give it a fresh try and dedicated myself to reading the whole series straight through.

When I stepped back and approached the books as a teenaged girl might (since, after all, the teen girl is the intended audience), I was able to enjoy the series as entertainment.  The writing is not stellar but the story is interesting and the appeal to teen girls is understandable: here is a female lead who is socially awkward, clumsy, not particularly beautiful, but who has two complete hottie guys - and most other males at her new school - falling all over themselves to win her heart.  She's a bit flaky, emotional, dramatic. . . really pretty wimpy, too, until the later novels, but she's a man-magnet? And why again did females of ALL ages flock to these books?  It really made me a little sad that this series was the end-all/be-all of books.  But I digress.

For entertainment value, these are worth the reads.  Everything ties together very conveniently, the impossible is made possible, and things work out just fine without anyone's tender feelings being hurt.  Vampire love conquers all!!  And I try to not let it bother me that Bella basically gets married so she can have sex. . . with a vampire. . .who is 150-years-old (but dang, he's sure purdy.)  Could this be any more teenage lusty and pedophiley than that?

There is much talk about the Mormon parallelism. . . big deal. Stephenie Meyer is Mormon, after all. But if you want to read a funny, possibly offensive take on the Mormon angle, go to http://stoney321.livejournal.com/317176.html and enjoy.  The author is Mormon herself and holds no punches, and beware - she does use a naughty word or two - but it's a very complete summary of each book and the Mormon influences, and I found it humorous and eye-opening.

As a final note, I did watch all four of the movies after reading the books.  Based on the books, I would definitely be Team Edward.  I don't feel like they cast him right in the movies, and there's no way I'd be anything other than Team Jacob after movie two.  Rrrroooooowwwr.