Nap of the Earth 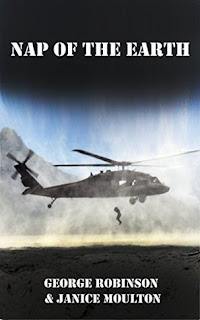 Blurb: A female helicopter pilot becomes a suspect in thefts of depleted uranium armor-piercing ammo from a US Army post in Germany. When some of the ammunition is used in ethnic uprisings in Estonia, relations between the US and the European Union deteriorate. One of her friends dies in a suspicious auto accident, another kills himself. Army CID arrests her and after polygraph interrogation, she is inexplicably released. She gets caught between Army investigators and the arms dealers who threaten her and demand the rest of the missing ammunition. Unfortunately, she knows exactly where it is.


With a plausible premise, Nap of the Earth was a thoroughly engaging military thriller.  Authors George Robinson and Janice Moulton have constructed a story that seems right out of the headlines with U.S. military ammunition being sold to another country, strained international relations, and political shenanigans that aim for good appearances rather than answers.  There is actually a disclaimer from the authors in the introduction of the book that acknowledges the similarities between the novel and the mid-1990s geopolitical climate, and the Army bases around which much of the story takes place are real.  To that end, the authors provide a map link to help readers get an idea of where the events in the story occur.

The book has two well-written female protagonists in helicopter pilot Nike Lauritis and CID Chief Warrant Officer Louise Cleveland.  With narration told from both of their viewpoints (as well as few other points of view), readers are able to experience a full spectrum of emotions and experiences women in the military might experience.  These two are intelligent, capable, and fast-thinking women who take their jobs seriously yet have to overcome unnecessary hurdles to perform.  Along with Lauritis and Cleveland, the authors provide a score of other memorable characters to love and loathe (grrrr. General Hedrick. Booooo. Hisssss.).

The writing is well-done, though at times the book gets a bit wordy, which bogs down the story.  Coincidence is critical to much of the action, but it mostly isn't a stretch to accept it. There are some typos and errors, but they aren't frequent enough to inhibit reading.   The last ten pages would work better for me if condensed into a short epilogue.  And the ending . . . the very last sentence is an unexpected surprise (once it sunk in, I may have uttered a long “ewwww”), but I'm not sure whether it adds or detracts -- the answer to that question probably varies by reader.

Overall, Nap of the Earth is an excellent story that includes elements of intrigue, humor, and even some romance.  I hope to see more from these authors who provided me an eBook copy in exchange for my honest review – the only kind I give.

ABOUT THE AUTHORS: Robinson and Moulton grew up in New York City, met at Cornell and went to graduate school at the University of Chicago. Moulton’s PhD is in philosophy; Robinson’s in psychology. They became college professors who used to write academic books about language, ethics, and China and articles about several other topics including robots, visual illusions and debunking pseudoscience. They switched to writing thrillers after having their own adventures: They fled East Berlin with US Army intelligence officers just before the big demonstration that brought down the Berlin Wall. They were interrogated by Chinese Security Police about the student demonstrations before the Tiananmen disaster. They gathered enough spent bullets from the street in front of their Chicago apartment to counterweight harpsichord keys; saved 60 people from a bus-crash in rural Thailand; danced with Uighurs on a Chang Jiang riverboat; rode horses in New Zealand with a stuntman who doubled a Lord of the Rings Nazgûl; and some other things you can’t know about. They continue to write fiction and are finishing a novel based on the discovery of diamonds in China. The rest of their time is spent working with students, traveling, collecting Ghanaian paintings, doing music and photography.