Hyperbole and a Half 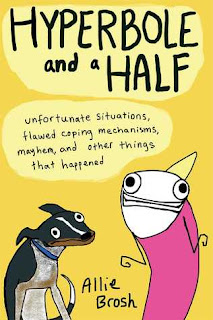 Brosh, A. (2013). Hyperbole and a Half: Unfortunate Situations, Flawed Coping Mechanisms, Mayhem, and Other Things That Happened. Touchstone Books.

Blurb (from Goodreads):
This is a book I wrote. Because I wrote it, I had to figure out what to put on the back cover to explain what it is. I tried to write a long, third-person summary that would imply how great the book is and also sound vaguely authoritative--like maybe someone who isn’t me wrote it--but I soon discovered that I’m not sneaky enough to pull it off convincingly. So I decided to just make a list of things that are in the book:

And I was amused -- the essays (chapters? sections? rants?) on motivation and the goose incident were really funny, and even though I wouldn't say I'm really a dog person, the dog stories gave me a few snort out loud moments -- anyone who owns a dog can relate.  If you're not a dog lover, you will get tired of the dog stories, which take up considerable space.  The drawings are quirky and were a good addition to the book, though there were some times when they seemed random and didn't really line-up with the writing. Then again, that's really a metaphor for Brosh's life & writing and what makes her/it real.

There was a poignant essay about the author's struggle with depression, and I understand now that it is part of what springboarded (yes, I made-up a word) her into the limelight. However, the numerous self-deprecating, look-how-screwed-up-and-superficial-I-am stories got a bit tedious. Even as she seems to be soul searching, she pounds the readers with her perceived shallowness and "shitiness," as she says, and that wasn't too funny.  Depression is a heavy subject, so the book gets heavy and Brash doesn't hold back any punches.

Yes, the main theme behind all the writings is depression, but the book lacks a continuous thread to hold it together, and it wasn't satisfying to go from still feeling an ache in my cheeks from smiling to reading something dark and a little uncomfortable. Maybe the thing to do would have been to take this in chunks instead of reading it straight through, but the last third of the book dragged a bit, so maybe take it in chunks but hop around.  It is a very quick read and appears that the content is really straight from Brosh's blog, Hyperbole and a Half

My recommendation is to check-out the blog (and anything posted after 2013 would be material that's not covered in the book), and if it's your thing, then try the book. Brosh has a new book, Solutions and Other Problems, expected to publish in October, 2016, which is supposed to be all new material not posted on the blog. 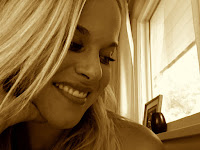 ABOUT THE AUTHOR: Allie Brosh has enjoyed writing ever since her mom tricked her into writing a story to distract her from her immediate goal of wrapping the cat in duct-tape. She started her award-winning blog in 2009. Brosh lives in Bend, Oregon, with her husband Duncan, her two dogs, and six pet rats.