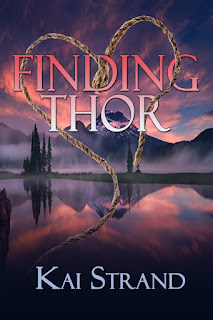 Happy one year book birth anniversary to YA Romantic Suspense Finding Thor, by Kai Strand! Scroll down for my book review and a GIVEAWAY!

Tragedy has left Cara Cassidy broken and the only thing keeping her from giving in completely is her guilt. Until Nik Rock.

Nik stirs up feelings in degrees she has never experienced, and causes her to do things that most assuredly give him the wrong impression – like kiss him before their first date. Somehow, he breaks down the walls around her emotions until she has no choice but to forgive herself and feel again.

But a mysterious, troubled past follows Nik, and Cara may prove to be his weakest link.

When a royal princess shows up looking for Nik, and an international gang arrives looking for missing jewels, Cara lands in mortal danger. Will she be able to save herself? What will happen to her newly repaired psyche if she loses Nik?


The veil dropped over Nik’s expression so fast, it told her exactly what she didn’t want to know. Nik had indeed seen her mom. Cara turned away from him again intending to trudge back into the classroom.

“By the crown, will you stop already?” Nik begged.
The exasperation in his tone and the odd choice of words piqued her curiosity. Cocking her head, she asked, “By the crown?”
The frustration melted away and Nik pursed his lips, which almost distracted Cara enough to forget the thread of conversation, but she tore her eyes away and asked, “Is that what they say in Seattle?”
Nik’s eyes lit with appreciation. “Aren’t you clever?”
“Am I?”
He nodded. His appreciative appraisal and half smile wreaked havoc with her supposed cleverness.
“Nik?” she breathed.
“Yes?” He tilted toward her giving her the impression he hung on her every word. His eyes were glued to her lips, which she realized were parted and ever so slightly panting.
She gulped. “Can we perhaps do this after school?”
When he raised his gaze to meet hers she almost liquefied under the heat of it. “Can I trust you?”
“Trust me to do what?” Cara asked. She was losing the ability to think.
“Show up.” He slid closer and she held her breath hoping he would take her in his arms.
“Show up where?” she asked.
A full-blown grin curved across his face and she thrilled with the knowledge she’d put it there. Then she realized she couldn’t remember how.
“Actually, I was going to ask you that,” Nik said. His eyes roved her face.
“Wait. What?” Cara’s voice was so breathy she wasn’t sure if she spoke or gasped.
“Where should we meet? After school.”
She itched to rise up on tiptoe and kiss that stellar grin off his mouth.
A low chuckle rumbled through him. “Why don’t you tell me in gym class?”
She nodded slowly. Was he a drug? Or maybe the male version of a siren. Did they have those?
He tipped further forward and she caught her breath. Then he sighed.
“See you next period.”
Her mouth fell open as he walked away. He hadn’t even touched her and she was burning with need.
At the end of the hall, he glanced over his shoulder and grinned when he saw her still gaping after him. When he walked out of view she let out the breath she’d been holding. It stuttered and shook, but was relieved to escape her burning lungs. How long had she been holding her breath?
By the crown, Nik Rock was dangerous!

Finding Thor is available in print or electronic format from the following:
Amazon| Barnes & Noble| Whiskey Creek Press| All Romance| BookStrand|
Add Finding Thor to your to-read shelf on Goodreads


Readers, get ready for a wild ride because Finding Thor has a lot going on in it. Main character, Cara, is dealing with some major grief and guilt issues, managing an emotionally absent mother, struggling with newfound sexual awareness and desires, and falling for a smoking hot guy who may or may not be her boyfriend. As if all those things aren’t enough to keep a girl busy, she’s also fighting to stay alive as kidnappers take her hostage. Twice.

Author Kai Strand takes readers from one crisis to another with a wide cast of characters. At the core, there is Cara and her best friend Kelly, where readers will feel the most heart-warming moments of friendship and loyalty and the glorious security of having someone in your life who takes you at your very best and your very worst.  In Cara, Strand captures the indecisiveness and ever-changing levels of confidence, as well as the complete confusion of budding sexuality, that define the teenage years.

The plot is unique and the pacing is good, but readers need to be prepared to suspend their disbelief – a lot – especially in the scenes involving the kidnappers and various injuries and tortures that occur.  The responses to these situations didn’t ring true, nor did the secrecy this group of teens was able to keep.  The dialogue between the characters was well-balanced and seemed authentic in most situations.  The writing was solid, but the book needs additional editing to clean up some basic errors in word use and punctuation.

Young adults will enjoy the action, romance, and mystery in Finding Thor, but sensitive readers should be aware that there are some fairly graphic scenes involving torture. The language is very mild, with only an occasional damn or hell thrown in the mix.

Thank you to the author for providing me an eBook in exchange for my honest review – the only kind I give. 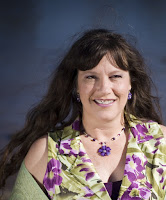 ABOUT THE AUTHOR:When her children were young and the electricity winked out, Kai Strand gathered her family around the fireplace and they told stories, one sentence at a time. Her boys were rather fond of the ending, “And then everybody died. The end.” Now an award winning children’s author, Kai crafts fiction for kids and teens to provide an escape hatch from their reality. With a selection of novels for young adult and middle grade readers Kai entertains children of all ages, and their adults. Learn more about Kai and her books:

Swag alert! Looking for your Thor? Look no further, Kai’s got you covered. Enter to win a custom tote bag, for all of those books you like to carry with you, and a Thor baseball cap. Easy entry for those in a hurry or many other ways to earn more entries for contest junkies. FT swag pack can only be shipped in the United States. If first winner is International, an Amazon gift card will be substituted and another winner will be chosen.

a Rafflecopter giveaway
Posted by Kristine at 2:00 AM