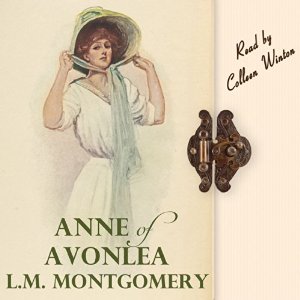 Following Anne of Green Gables (1908), this book covers the second chapter in the life of Anne Shirley. We learn of Anne's doings from the age of 16 to 18, during the two years that she teaches at Avonlea school. It includes many of the characters from Anne of Green Gables, as well as new ones: Mr. Harrison and his foul-mouthed parrot, Miss Lavendar Lewis, Paul Irving, and the twins Dora (sweet and well behaved) and Davy (mischievious and in constant trouble). Anne matures, slightly, but she gets into a number of her familiar pickles, as only Anne can: She accidentally sells her neighbor's cow (having mistaken it for her own), gets stuck in a broken duck house roof while peeping into a pantry window, and more.


➜Use the code Anne_VT17 to get 35% off downloads and CDs from Post Hypnotic Press.

Lucy Maud Montgomery OBE (November 30, 1874 – April 24, 1942) was a Canadian author best known Anne of Green Gables and the series of novels that book begins. The "Anne" of the books is Anne Shirley, an orphaned girl who comes to live with Matthew and Marilla Cuthbert on their farm, Green Gables. Published in 1908, the book was an immediate success in Canada, the United States and beyond. It has been adapted multiple times to screen, stage, radio, and TV.


Anne Shirley made Montgomery famous in her lifetime and gave her an international following. Anne of Green Gables was ranked number 41 in "The Big Read," a survey of the British public by BBC to determine the "nation's best-loved novel" (not children's novel!). And a survey conducted by School Library Journal (USA) in 2012 ranked Anne of Green Gables number nine among all-time children's novels.
Anne of Green Gables was followed by a series of sequels with Anne as the central character. Montgomery published 20 novels as well as 530 short stories, 500 poems, and 30 essays in her lifetime. Her work, diaries and letters have been read and studied by scholars and readers worldwide. Mostly set in Prince Edward Island and locations within Canada's smallest province, the books made PEI a literary landmark and popular tourist site. Montgomery was made an officer of the Order of the British Empire in 1935.

Colleen is a Vancouver actor, singer, dancer, director and choreographer...and now a narrator. Her career has taken her all over the country and includes the Stratford, Shaw and Charlottetown Festivals, the original Canadian companies of CATS and Show Boat, extensive film/TV credits, and numerous directing/choreographing credits. Her stage work has been honoured with numerous nominations and a Jessie and Ovation award and she received a cultural award given by her local Chamber of Commerce. She was especially pleased to have recorded the works of L.M. Montgomery for Post Hypnotic Press just before she embarked on a production of the musical Anne of Green Gables at Theatre Calgary in which she plays Marilla Cuthbert.


Aug. 7th:
The Book Slayer
A Book and A Latte
Tara's Book Addiction


Aug. 10th:
Jorie Loves A Story
Notes From 'Round the Bend
Dab of Darkness
Haddie's Haven


Aug. 11th:
To Read Or Not To Read
Joy of Bookworms
Hall Ways
Bound 4 Escape

➜Sign up as a host here
Posted by Kristine at 2:00 AM