Caramels with a Side of Murder ~ ~ Audio Book Blog Tour, Audio Excerpt, & Review! 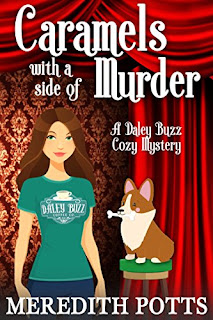 Sabrina Daley's world is turned upside down when a local psychic predicts that her missing sister will be found.


Unfortunately, the psychic, Miss Terri, is unable to provide any further details.

Desperate for something more to work with, Sabrina shows up at Miss Terri's house the next day, ready to beg for another psychic reading. Instead, Sabrina finds Miss Terri's lifeless body.

So when the local police have trouble solving Terri's murder, Sabrina sets out to bring the psychic's killer to justice before they strike again. 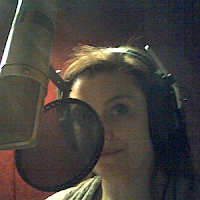 Lisa Beacom lives in Chicago, Illinois, and narrates books in all genres.

HALL WAYS REVIEW: 3.5 Stars. Audio book review. Caramels with a Side of Murder is the second installment of the Daley Buzz Cozy Mystery series by Meredith Potts, and like the first book, I was drawn to the setting: it’s set around a coffee shop, The Daley Buzz, and located in Treasure Cove, a seaside town. Plus, the book cover is cute and enticing – though sadly, neither the caramels nor the corgi makes much of an appearance in the story.

There is comfort when a reader returns to a well-known place.  For readers who enjoy a series in which each book follows the same structure and formula, the Daley Buzz cozies are for you. Treasure Cove is a small town (albeit with an alarming murder rate) and our core group of characters is back – and main character Sabrina must make some amends with some of them for false accusations and abrasive behavior in trying to solve the town’s last murder mystery. But look out if you are in her sights as a suspect in the latest murder – in Sabrina and her policeman boyfriend’s book, you are guilty until proven innocent, and you will be harassed until the real murderer is found.

Readers will get to know some of the characters a little better, including Sabrina’s mother, Elizabeth (strangely, she’s called “Elizabeth” by her daughter and that’s not ever explained). I found myself chuckling and nodding in agreement with Elizabeth’s way of thinking, and of course, this line sealed the deal:

"One thing I'm not going to do at my age is waste calories on mediocre chocolate."

We also get to know Sabrina’s best friend Shannon a bit better, but I am on the fence as to how I feel about her. She comes off sounding like a weenie at times, but the reason behind her indecisiveness about which man to pick is an interesting one. Shannon adds an extra layer to the story and gives readers a lighthearted break from Sabrina’s amateur sleuthing.

If you read my review of book one, Chocolateswith a Side of Murder, I mentioned that what made me decide to stick with the series were two sub-plots that really piqued my curiosity: the mysteries of main character Sabrina’s ten+ years missing sister and the goings-on at the Waterson estate. It’s clear that the author is intentionally keeping these story lines in the background to move them forward in each of the series installments (I believe there are ten books now). Caramels starts off promising with another sighting at the mansion and Sabrina getting information about her sister from a psychic, but it is like the check-boxes are completed, and those lines are not revisited. There’s also a third story going on in the background: what’s going on with the men’s only secret meetings?  Unfortunately, two books in, readers are no closer to knowing anything more about any of these sub-plots, and since I’m not overly fond of the main character, that’s probably going to be a deal breaker for me in continuing the series. On the plus side, since no substantial or new information is presented, it makes Caramels work as a stand-alone, so readers can start with book two and not be much out of the loop.

The writing suffers a bit again because of limited and repeated word and phrase use, unnatural, cookie-cutter descriptions of the characters, and asking the readers to unreasonably suspend their disbelief in terms of police procedures. (And I laughed out loud when Sabrina, who is running a small business, was suspicious of someone working late and said, “I can't remember the last time I was there two hours after close of business." I can't remember the last time I didn't work at least two hours extra!) As I haven’t read a print copy of the book, I can’t be certain if it’s the text or the narrator, but my ear caught some agreement errors and incorrect word choices, so it may be there is also need of some additional proofreading in the print.

The narration of Caramels with a Side of Murder is performed by Lisa Beacom, and this is one place where there is a huge improvement over book one in the series. Lisa’s voice is similar enough to the first narrator’s that listeners aren’t jarred by the change, but she’s infinitely better. Apart from pronouncing the word “caramels” as “carmels” in the first thirty seconds, her narration is fabulous. She has a perfect rhythm to her reading and voices the various characters so that each has his or her own marker.

The basic murder mystery is good and there are plenty of places where readers are misled, so it’s tough to figure out the whodunit part of the mystery. For that and for the sub-plots, I would recommend patient cozy-mystery lovers give the series a try as what bothers me might not be an issue for others. Even if it’s not for me, Caramels with a side of Murder just might be your cup of coffee.

Thank you to Audiobookworm Promotions for providing me an audio download in exchange for my honest review – the only kind I give.