The Fleecing of Fort Griffin ~ ~ ~ Blog Tour, Review, and Giveaway! 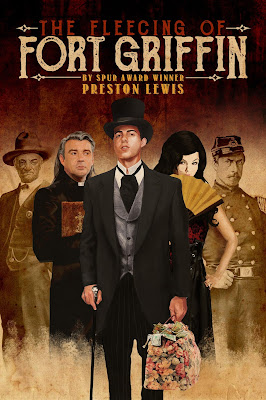 When the young Englishman Baron Jerome Manchester Paget arrives in 1878 Fort Griffin with a satchel full of money to start a buffalo ranch and find a bride, a horde of colorful swindlers from throughout Texas arrive to help themselves to a rich serving of his naiveté to frontier ways.
With a passel of oddball characters and more twists and turns than a stagecoach trail, The Fleecing of Fort Griffin pits the baron against crooked gamblers, a one-eyed gunfighter, a savvy marshal, conniving females, a duplicitous cavalry officer and a worldly stump preacher.
To stay rich, the baron must stay alive!  And to stay alive, the baron must rely on a fourteen-year-old orphan and a rooster that serves as his guard animal.  Even so, the odds and the cards are stacked against the Englishman and his bold vision of becoming the baron of bison in West Texas.
Written by Spur Award-winning author Preston Lewis, a master of western plot twists and humor, The Fleecing of Fort Griffin takes readers on an unconventional and uproarious journey through the Old West and some of its unsavory characters.

PRAISE FOR THE FLEECING OF FORT GRIFFIN:


“… a work of colorful and humorous fiction,”
Albany Review

“The Fleecing of Fort Griffin by Preston Lewis of San Angelo is one of the funniest westerns I’ve ever read.”
Glenn Dromgoole, Texas Reads

“If you're looking for a delightful tale, check out The Fleecing of Fort Griffin.”
Bryan Eagle

“The stage rumbled towards them like a coach from hell, churning up dust and apprehension. The stage came to a halt..., but the dust kept moving down the street as if it were hitched to the souls of the horses.”

And out of the stage steps Baron Jerome Manchester Paget, making his appearance in Fort Griffin, Texas. Let the grand caper begin!

In The Fleecing of Fort Griffin, author Preston Lewis has crafted an at times snort-inducing comic western that keeps readers fully engaged.  By the title of the book, it’s no secret someone’s on the take. The real fun is watching not just the who but the how (and how many) and ultimately seeing the grand scheme unfold. As the story progresses and every man, woman, and child wants a piece of Paget, the Baron’s enemies begin to stack-up and his time of good fortune seems to wind-down. Readers will be furiously turning pages to see if the Baron can beat the clock and the odds to get out of town alive.

“Beulah Foster was as ugly and mean as gangrene.”

Preston Lewis is a talented writer, and it’s imminently clear why the West Texas Historical Association gave him the Elmer Kelton Award for Best Creative Work on West Texas for Fleecing. The book is cleanly edited with only a few scattered typos/errors that slipped by the proofreader's eye, and none are distracting. Hallelujah! Through Lewis’s word choices, figurative language, and vibrant descriptions of people and place, the world of Fort Griffin pops to life. The town may be dusty and dirty, but the people are as colorful as they come and uniquely fashioned so that even with a wide cast of characters, each is clearly defined.

“If Tuck could not convince folks to repent, at least he could exhaust them so they would be too tired to sin.”

One of my favorite characters, oily as he is, is the money-loving preacher, the Reverend G.W “Gawd Willing” Tuck. Quite nearly every scene where he’s involved had me wiping tears of laughter from my eyes. I guess my own experience of being a Texas born and raised girl, and seeing over-the-top evangelical preachers, makes the Reverend -- and the suckered-in “lambs” who follow him – realistic and ridiculously funny.

Reminiscent of The Sting with a neatly tied-up resolution that had me grinning from ear to ear, The Fleecing of Fort Griffin is refreshingly different and is pure fun to read. I’ll be handing out copies to my friends and family and adding more books penned by Preston Lewis to my ever-toppling TBR pile.


Thank you to the author and Lone Star Book Blog Tours for providing me a print copy in exchange for my honest opinion – the only kind I give. 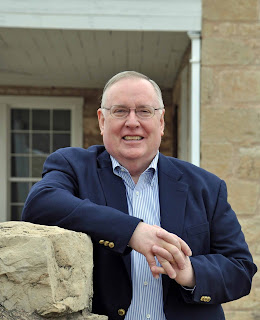 Lewis is best known for his comic novels in The Memoirs of H.H. Lomax series.
Bluster’s Last Stand, a novel about Custer and the Battle of Little Bighorn, is the latest volume in the well-received series that began with The Demise of Billy the Kid.  Subsequent books in the series—The Redemption of Jesse James and Mix-Up at the O.K. Corral—were both Spur Finalists from Western Writers of America (WWA).
Blood of Texas, Lewis’s historical novel on the Texas Revolution, received WWA’s Spur Award for Best Western Novel.  His True West article on the Battle of Yellowhouse Canyon won a Spur Award for Best Nonfiction Article.  In addition to his two Spurs from WWA, Lewis has earned three Elmer Kelton Awards from WTHA.
Lewis’s novels have appeared under the imprint of national publishing houses such as Bantam, Zebra and HarperCollins and of regional publishing companies like Eakin Press and Wild Horse Press.  His short works have appeared in publications as varied as Louis L’Amour Western Magazine, Persimmon Hill, Dallas Morning News, True West, The Roundup, Journal of the Wild West History Association and San Angelo Standard-Times.
A native West Texan and current San Angelo resident, Lewis holds bachelor’s and master’s degrees in journalism from Baylor and Ohio State universities.  He earned a second master’s degree in history from Angelo State University.  He is a past president of WWA and WTHA.  Lewis is a longstanding member of the Authors Guild and an associate member of the Dramatists Guild of America.
Website ║ Facebook ║ Goodreads
║Amazon Author Page║ 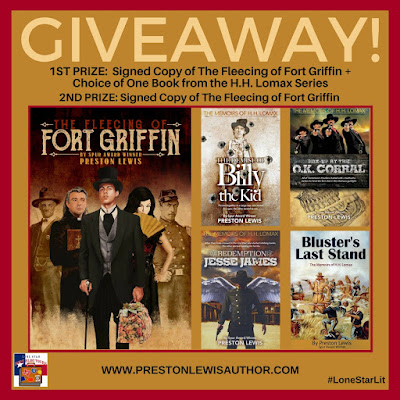