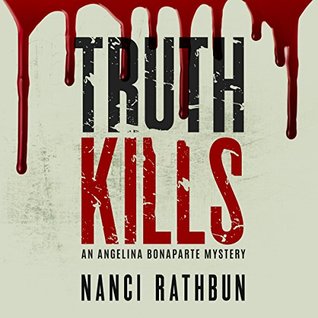 A murdered mistress. An accused mob boss. Can two detectives put their differences aside to find the real killer?


Angelina Bonaparte is starting from square one. After a messy divorce, the middle-aged librarian put down her books and picked up a new gig as a private investigator. When a mob boss heads to jail for his mistress's murder, she has no issue with the womanizing scumbag rotting in prison. But when the suspect's pregnant wife swears his innocence, Angelina can't find it in her heart to refuse the case.

Already reluctant to get involved, her frustration grows when she's forced to work alongside Ted Wukowski, a homicide detective who thinks a crime scene is no place for a woman. In the search for clues along the mistress’s long record of broken hearts and promises, Angelina’s natural charm is the perfect complement to her temporary partner's take-no-prisoners interrogation style. And before long, she and Ted can feel their grudging respect transform into an undeniable attraction.

To solve the case and catch the murderer, the PI and the cop must learn to trust each other completely before an innocent man goes to jail for a crime he didn't commit…

Buy Truth Kills today, and ride along with a hard-hitting detective who’s not afraid to reinvent herself!

“While on the job, I can look like… the neighborhood old lady gossip. Off the job, I’m a fifty-something hottie. Gravity has taken
a small toll, but who notices in candlelight?”

Main character Angelina is super confident yet still has the same concerns of many middle-aged women, including “post-thirty chin hairs,” and vacillates between caring and not caring about what other people think. She’s raised her children and loves her grandchildren, but her life is her own and not about them anymore. And best of all, even at age fifty-something, she’s just getting started and reinventing herself!

I typically avoid reading romances, but Truth Kills is a little different and that romance element, which is not the primary force in the book, worked for me. Truly, it wasn’t much more than a few thoughts and one about-to-get-steamy scene, but it was a natural progression and realistic for how two people of those ages and life experiences would come together. They’ve been there, done that, and know what they want. Plus, I like that it depicts a 50+ protagonist as on fire and shows that there are men in that range looking fabulous, too. Refreshing.

Author Nanci Rathbun writes some fabulously rich characters who will bring forth a wide range of reactions from the readers. She infuses enough humor throughout the story to keep it from feeling too heavy on the procedural side, and she is clever in using literary quotes (ranging from Flaubert to Jenny Joseph’s “I shall wear purple”) to set the tone for each chapter. Rathbun conveniently uses Angelina’s propensity for list making to give readers a nice bring-to-date on all the suspects in the murder case. Though readers might not be surprised by the whodunit part, they likely will be for the why.

“My drug of choice was not only effective, but legal.”

BONUS POINTS AWARDED: As if having a 50ish-year-old main character isn’t enough for me to feel at home (admittedly, I can’t relate to some aspects of her life *cough*), Angelina is also a coffee drinking former librarian! Granted, she doesn’t speak highly of the profession (though she’s clearly proud of the master’s degree), but I won’t hold it against her…unless she bashes it in the next book!

Truth Kills is an entertaining and engaging story with plenty of action but just as much interest coming from the main character’s reactions to her life circumstances. I highly recommend it to fellow readers-of-a-certain-age who will appreciate and chuckle at the perks and pitfalls of mid-life. I have already started listening to the second book in this series, Cash Kills, and it feels good to be back with Angelina again.

ABOUT THE NARRATION: Initially, I thought the book seemed like it was being read to listeners and not performed. However, it soon became apparent that narrator Kieran Calland Metts was establishing the voice of Angelina, who is matter-of-fact and not overly expressive in her voice. This voicing grew on me and ended up being perfect – and I am so glad to see that Metts is back to narrate the next two books in the series. As readers meet more characters, Metts gives each of them enough of an accent that each remains distinct from others without any being over the top. I mostly listened at 1.25 speed, but this was due more to my impatience than anything else.

Thank you to Audiobookworm Promotions and the author for providing me an audio download in exchange for my honest opinion – the only kind I give.

I received this audio book as part of my participation in a blog tour with Audiobookworm Promotions. The tour is being sponsored by Nanci Rathbun. The gifting of this audio book did not affect my opinion of it.

Nanci Rathbun is a lifelong reader of mysteries – historical, contemporary, futuristic, paranormal, hard-boiled, cozy … you can find them all on her bookshelves. She brings logic and planning to her writing from a background as an IT project manager, and attention to characters and dialog from her second career as a Congregationalist minister.

Nanci grew up an Army brat, living in Germany, France and Korea, as well as several states in the U.S. After her dad retired from the service, the family settled in Milwaukee, Wisconsin. There, Nanci raised her daughter and son, while working at AT&T. She never expected to move, but when her second grandchild was on the way, she wanted to be closer. One of her greatest joys is hearing her three granddaughters shout "Nana" when she comes in their front door in Fort Collins, Colorado.

Nanci and her Maltipoo, Teeny, now live in Wellington, Colorado. No matter where she makes her home, she will always be a Green Bay Packers fan.

Kieren Calland Metts is addicted to audio books. She has almost 1,000 in her Audible.com library and has listened to most of them! She tends toward mysteries of all kinds, especially cozies, and YA dystopia.


She grew up a diplomat brat, traveling to tours in Baghdad, Iraq; and Kabul, Afghanistan. After several more moves in the U.S., the family settled in Ohio.

Kieren has a background in copy editing, book & newspaper design, and web production, adores arts and crafts, and has a weakness for fluffy orange kitties. 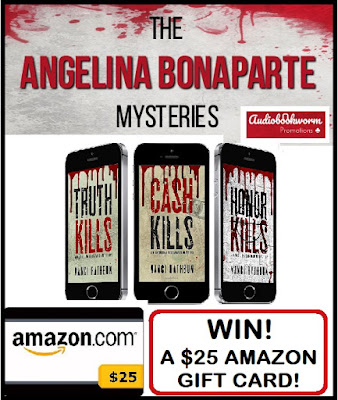 
WATCH FOR HALL WAYS BLOG'S REVIEW OF BOOK TWO, CASH KILLS, ON THE OCTOBER 29, 2018 STOP OF THE AUDIOBOOKWORM PRODUCTIONS TOUR!