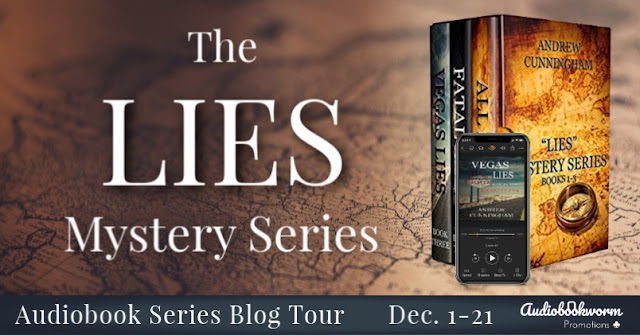 Daisy Leduc was forgotten and alone. That was just how she wanted it. But when she is discovered stabbed to death in a dusty little Texas town, it plunges Del Honeycutt and best-selling mystery author Sabrina Spencer into a 30-year-old mystery involving murder, hidden identities, dangerous family secrets, political intrigue, and a long-forgotten serial killer.

Daisy’s estranged daughter, who hasn't seen her mother in years, receives a package sent shortly before her mother's death. A note instructs her to immediately contact Sabrina and give her the package if Daisy is killed. But why Sabrina? The temptation to uncover the answer leads Del and Sabrina on a dangerous quest to find Daisy's killer. When they discover Daisy, under a different name, supposedly died 30 years earlier, they find themselves squarely in the cross hairs of killers whose deadly secrets lie in Daisy's mysterious past.

HALL WAYS REVIEW: Audio Book Review: Author Andrew Cunningham starts Fatal Lies with a prologue that places readers in a richly described scene. We’re introduced to a character, easily imagined, and provided her somewhat heavy back-story -- and there's good reason we’re uncomfortable: BAM! A horrible crime is committed, and we’re off to the races as a series of mysteries reveal themselves.

As with the first book in this series, All Lies, in Fatal Lies, I enjoy the literary angle to the story with main character Sabrina being a famous mystery writer. Reading about her encounters with her fans (authors are rock stars, after all) is amusing, and especially appealing is that Sabrina is benevolent and shares her earnings freely for good causes. In Fatal Lies, readers get better acquainted with Sabrina as more of her past is revealed. She’s really growing on me as a smart, tough, quick-thinking woman who gets things done in a take-no-prisoners way.

Main character Del, Sabrina’s boyfriend and our primary narrator, is taking a stab at writing, too, and silently corrects people’s grammar mistakes. He is smitten with Sabrina, and hearing his thoughts and feelings when he sees/smells/touches her is sweet. Sabrina clearly wears the pants in this relationship, which is a good thing since Del frequently refers to wetting his when they get in tight and deadly situations. His inner monologue is great.

The author sprinkles information so that readers get a good bring-to-date about the prior book, making Fatal Lies work well as a stand-alone. While characterization is well-done (oh, the bad guys that Cunningham writes! Loathe them so!), a few things caught my ear this time that took away from the story. There are some unnecessary repeated details (lots of back to the hotel and taking showers), unnecessary F-bombs (though other profanity is scene appropriate), and some awkward sentences (“It would soon begin showing signs of dusk.”). I suspect there are some punctuation errors given how the narrator read some sentences – more on that coming – but it’s impossible to tell. Either way, some additional editing is probably in order.

“We just prayed that Lubbock would make it all worth it. It wouldn’t. It was a dusty town -- maybe all towns in Texas are dusty... I had a feeling though that for my first foray into Texas, I hadn’t picked the garden spot of the state.”

A bit of the story takes place in Lubbock and in “a little town in Texas called Spur. I looked it up. It’s in the middle of nowhere.”  These are two places with which I am well acquainted and have a fondness for, so I am a little defensive and cry foul. However, I give the author credit for mentioning why Spur has character “of sorts” with its tiny house population and giant sculpture. The Texas characters are mostly cast as uneducated country-bumpkins, but alas, I must admit we have our share.

Sabrina and Del travel beyond Texas and go all over the country to try to get pieces of what they think is one puzzle to complete. In reality, they are working several puzzles to solve some mysteries and uncover truths they don’t even know are buried. Fatal Lies yanks you back and forth: crisis, crisis averted, crisis, crisis resolved. Repeat. You’ll think you can catch your breath but then WHAM, something new comes into the picture.  At times, the story gets quite convoluted, but the tangles get worked out, and readers have lots of ah-ha moments as a satisfying conclusion is reached. I’ll absolutely be reading book three, Vegas Lies.

ABOUT THE NARRATION: Greg Hernandez returns to narrate this second book in the series, and he has his rhythm with these characters. He is more consistent in delivering emotion with his narration, and happily, Hernandez doesn’t attempt a Texas accent or falsetto female voices. His even pacing and delivery allowed me to listen at regular speed. My only criticism is that at times, it sounds like punctuation is being ignored and appropriate pauses aren’t taken, which creates listening run-ons. Without seeing the text of the book, I don’t know if this happens because the punctuation is missing, but it sounds unnatural.