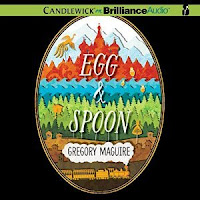 I give this audio book 4 out of 5 stars

Blurb: Elena Rudina lives in the impoverished Russian countryside. Her father has been dead for years. Her brothers have been conscripted into the Tsar's army and taken as servants in the house of the local wealthy landowner. Her mother is dying, slowly, in their tiny cabin. And there is no food. But then a train arrives in the village, a train carrying untold wealth, a cornucopia of food, and a noble family destined to visit the Tsar in St. Petersburg - a family that includes Ekaterina, a girl of Elena's age. When the two girls' lives collide, an adventure is set in motion, an adventure that includes mistaken identity, a monk locked in a tower, a prince traveling incognito, and - in a starring role only Gregory Maguire could have conjured - Baba Yaga, the witch of Russian folklore, in her moving house perched on chicken legs.

HALL WAYS REVIEW: I don't have much patience for regular speed on audio books, so as usual, I listened at 1.25x, which was perfect.

A monk, the narrator of the story, is amusing with his asides and humor in telling the story. Couple this with the outstanding voice narration of Michael Page, and the story is taken to a higher level of enjoyment. Page seamlessly voices the numerous characters where males sound male, females sound female, and witches sound witchy!


Speaking of witches, Baba Yaga steals the show. What a hoot she is! She is a perfect counter to the prim and proper-ness expected in civilized society, and her character made the book for me.


There are so many different levels to this story -- there is the fantastical and the the practical, smoothly woven together by Maguire to create something for everyone to enjoy. Folk tales and fairy tales are good for all ages, and though this is categorized young adult, there is definitely adult appeal in Egg and Spoon.


While the reading could be challenging for some younger readers, the richly drawn characters and setting, along with a basic plot that's highly unusual and interesting, are going to keep readers engaged. Advanced readers are likely to get a different experience from others because it's really quite a complex story with statements on social injustice and inequality, the environment, the life, death, and more.


The book goes longer than it needs to with some extraneous and seemingly random parts which could have been left on the cutting room floor. I feel like had I read this instead of listened, there definitely would have been some skimming. Even so, it's a wonderfully creative story and listening was time well spent. I have several of Gregory Maguire's books on my TBR shelf, and Egg and Spoon is incentive for me to move them to the top of the pile.


Thank you to Audiofile / SYNC Audiobooks for Teens free summer audio book program for providing this download with absolutely no strings attached. As always, my honest opinion is the only kind I give. 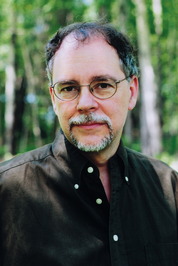 ABOUT THE AUTHOR: Gregory Maguire is an American author, whose novels are revisionist retellings of children's stories (such as L. Frank Baum's The Wonderful Wizard of Oz into Wicked). He received his Ph.D. in English and American Literature from Tufts University, and his B.A. from the State University of New York at Albany. He was a professor and co-director at the Simmons College Center for the Study of Children's Literature from 1979-1985. In 1987 he co-founded Children's Literature New England (a non-profit educational charity).

Maguire has served as artist-in-residence at the Blue Mountain Center, the Isabella Stewart Gardner Museum, and the Hambidge Center. He lives in Concord, Massachusetts. Learn more about the author and his books on his website, http://www.gregorymaguire.com/.
Posted by Kristine at 2:00 AM