BLURB (Amazon): Twelve-year-old Brine Seaborne is a girl with a past--if only she could remember what it is. Found alone in a rowboat as a child, clutching a shard of the rare starshell needed for spell-casting, she's spent the past years keeping house for an irritable magician and his obnoxious apprentice, Peter.
When Brine and Peter get themselves into a load of trouble and flee, they blunder into the path of the legendary pirate ship the Onion. Before you can say "pieces of eight," they're up to their necks in the pirates' quest to find Magical North, a place so shrouded in secrets and myth that most people don't even think it exists. If Brine is lucky, she’ll find her place in the world. And if she's unlucky, everyone on the ship will be eaten by sea monsters. It could really go either way.
----------------------------------------------------------------------------
GUEST POST
by Claire Fayers


My old Welsh teacher lives in a house which was owned by the family of Henry Morgan the pirate. This has nothing to do with my book, except that being Welsh is an excellent qualification for being a pirate.  A quick web search will throw up a whole list of pirates who were born in Wales.  Henry Morgan is the most famous, but my personal favourite is Bartholomew “Black Bart” Roberts from Pembrokeshire on the south Wales coast, who was captured by pirates, took to the life with enthusiasm and was soon elected as ship’s captain.  After a long and successful pirating career, he died during a skirmish with a naval ship - standing on deck and dressed in his best clothes, according to the stories.  A truly dashing pirate.

Growing up in Wales is also an excellent qualification for being a storyteller.  Our landscape is full of stories. Strange creatures lurk in the forests and lakes and King Arthur himself is said to sleep beneath the mountains.  One mountain in particular - Cadair Idris - has a legend attached that if you spend a night on its slopes you’ll either wake up mad or a poet (if you wake up at all.)  This idea of magical places really appealed to me and so, when I sent my pirates off on an adventure, it was natural that they should head for the most magical place in the world.

Magical North, the single most concentrated point of magic anywhere. It lies in the ice plains at the top of the world, where the sun only sets once a year. It is guarded by a monster a thousand times more terrible than the Dreaded Great Sea Beast of the South, it is surrounded by the Sea of Sighs, where the wind howls like the souls of the dead and men have drowned themselves rather than listen. Only a madman would attempt such a voyage— a madman or a hero.

The world of the eight oceans is entirely imaginary, but certain elements do bear some resemblance to real life.  Fish-birds and snow bears, for example.  And librarians.

I used to work in a library.  I’d actually written the first draft of The Voyage to Magical North before I started work there, and so the library island of Barnard’s Reach had already started to take shape, but much of my redrafting and editing happened while I was working as a library assistant.

Librarians are wonderful people.  They know stuff.  More than that, they know how to find out about stuff.  So, when my heroes needed to find out about Magical North, the solution was obvious - ask a librarian.

There’s a certain rhythm to the day in a library.  The morning routine of getting everything ready, the shelving of books.  Those satisfying moments when someone comes in with a question and you’re able to find the answer. And - my favourite time - the end of the day. I loved being last to leave, turning the lights out and taking one last look back at the shelves of books, all slumbering quietly, ready for the next day.

Barnard’s Reach is the biggest library in the world and so everything about it is exaggerated.  The rhythms of the day turned into thousands of little rules and the Book Sisters who worked there had become so focused on their mission to store information that they forgot the most important rule - that stories exist to be shared.  One thing is absolutely true, though: the passion they have for book. There’s a real delight in matching up the right reader with the right story, and unlike the Sisters of Barnard’s Reach, our own librarians are eager to share the books in their care.

Some people are surprised that a fantasy world full of pirates, monsters and magic also contains a library.  They shouldn’t be.  Every world should contain libraries: they are the true places of magic.

"What's the point of having a good story if no one gets to hear?"

I will admit that what sold me on this book was that I had read it included an island of female librarians who are the keepers of the books, and books are only for females to behold. As if that wasn't enough to lure me in, there was a wonderful cover and the promise of pirates, monsters (penguins that do WHAT?), good and evil, and magic! How could this book be anything but fabulous?

Well, it isn't anything but FABULOUS, fabulous, fabulous!  Author Claire Fayers has created incredible landscapes. Richly described, the world of main character Brine is one in which readers will find themselves fully immersed.  Whether the action is on land or on sea -- or at times something in between -- readers will feel as if they are experiencing it first hand.

The Voyage to Magical North has a memorable cast of characters, and despite there being a bunch of them, the author does a great job of making each character unique and distinct. For the most part, the characters own-up to their faults and show growth over the course of the book. Additionally, due to the multiple points of view, feelings are shown, which adds real depth to the characters.

Truly, this tale has a bit of everything, and by layering the storylines, weaving in some folk tales, and having one action packed chapter to another, there is never a dull moment. Beware, sensitive readers: there are some pretty intense, scary moments in store. Power through the uncomfortable bits because it is so worth the journey.

Fayers's writing is outstanding, and the book is extremely well-edited, which makes for maximum reading pleasure.  Also, the writing and the story are clever, which both model and challenge readers a bit.  The ending is satisfying (though of course, we want more), and the story ends in a way that definitely allows room for a sequel.  I sure hope to see more of Brine's adventures and hopefully with more libraries, pirates, fantastical creatures, and magic! UPDATE! THE JOURNEY TO DRAGON ISLAND comes out May 2017! Whoo hoo!

Thank you to the author for so wonderfully replying to my guest post request and to Macmillan Children's Books for providing me an eBook copy in exchange for my honest review -- the only kind I give. 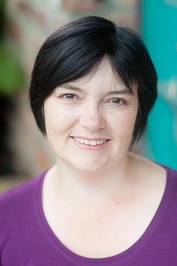 ABOUT THE AUTHOR: I live in South Wales, birthplace of the famous pirate, Henry Morgan. I used to work at Cardiff University, first in health and safety (you will notice that my pirates fight VERY safely) and then in the university science library. Now I write full-time at home with my husband and my two cats, usually stopped every chapter or two to let them in or out of the door. (My cats, not my husband: he can already open doors.)
In my free time, I like skiing, flying kites, and music – I can play the cello a bit and I’m learning the piano. I enjoy gardening and grow a lot of fruit and veg so if I come to visit you don’t be surprised if I bring a jar of jam.