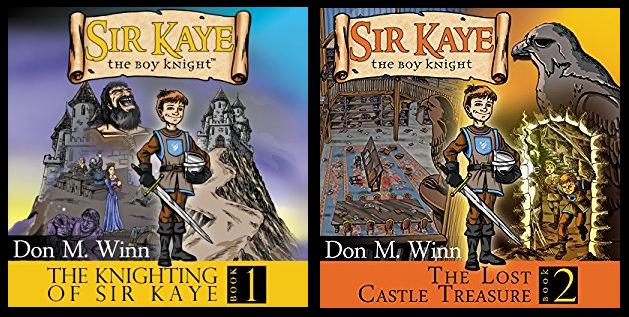 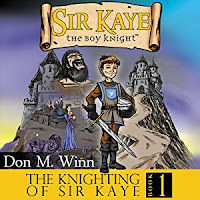 Kaye is an ordinary boy who dreams of becoming a legendary knight like his absent father. When the new queen knights Kaye for doing a brave deed to help another person, he gets his wish a lot sooner than he expected...but he's got a lot to live up to. Can he hold his own against all the other knights who hate him? Can he outwit the terrible Sir Melchor and defeat him in the deeds-at-arms competition in which all knights in the kingdom must participate? Can he help the queen save her kingdom...even a little bit? 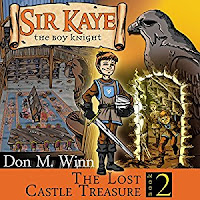 The treasure house of Knox castle is empty! Now conspiracy and war threaten the kingdom while mysterious noises and unexplained events fill the castle. As best friends Kaye, Reggie, and Beau search for the missing treasure, jealous knights plot to get rid of Kaye for good. Can Kaye find the treasure in time to save the kingdom? Or will he risk losing his knighthood forever? Join Kaye, Reggie, and Beau as they search for hidden clues, secret passages, a lost castle treasure, and their place in the world in this fast-paced adventure.
HALL WAYS REVIEW: And now for something completely different! I started this multiple award winning series last year by reading (and LOVING) the third book in this series, The Legend of the Forest Beast. Then recently, when I saw that author Don Winn was looking for reviewers of the audiobook versions, I jumped at the chance to get the backstories of Kaye and his friends.

In book one of the series, The Knighting of Sir Kaye, readers are introduced to the narrator of the book, Reggie. Through Reggie, readers are treated to Don Winn's wonderfully descriptive writing and figurative writing. Winn provides a visual of Meg, Kaye's little sister, that is truly memorable. And Reggie, who is very motivated by food, enters a village and says, "a really good smell drifted across my way and said hello to my nose, which made my stomach so jealous that it growled."

Of course, through Reggie, readers are also introduced to the namesake of the the series, Kaye. There are some great lessons, such as when Kaye is struggling with confidence, his worthiness, and his lack of preparedness, he is told, "your father is . . . teaching you to be a knight in a way that's right for you." The storyline reinforces to young readers that it's okay to be unique (like being a knitting knight). Book one has a nice, satisfying resolution that sets-up for book two.

In book two, The Lost Castle Treasure, the great lessons continue to be taught, and bullying is a stronger theme as Reggie and Kaye have new adventures -- and adversaries. Kaye is a great model for dealing with bullies and shows the importance of not reacting to teasing and bullying. And where in book one it was only hinted, in book two readers learn more about Reggie and why he hates schooling. These scenes are so well-written it is painful to feel Reggie's frustrations. And happily, Winn continues to use figurative language to make his scenes vivid. For example, in describing a storm, Reggie says, "I heard the thunder outside shouting at the rain, but the thick walls of the castle made it sound more grumbly than angry." That's good stuff and may even inspire young writers.

The audiobooks are all narrated by Stephen H. Marsden, who does an admirable job of voicing the various male characters, though like many narrators, some of his female characters aren't as strong.  He successfully expresses the many emotions of the characters and the many moods of the story. There were a few pronunciations that caught my ear (familiar -- 'fermiliar') and his presentation manner seemed geared more towards younger readers, which may be less attractive to the higher age range of the intended audience.

I highly recommend this series, which is ideal for both reluctant and motivated  independent readers (ages 9-12), and I think it would make a great choice for classroom/library/home read-aloud time.  You can read my review of book three, Legend of the Forest Beast, and a little birdie told me we can expect to see the final book in the series, The Eldridge Conspiracy, in June, 2017! Hooray!

Thank you to the author for providing me audiobooks in exchange for my honest opinion -- the only kind I give. 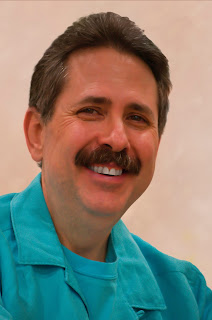 Don M. Winn is a multiple award-winning children’s author of ten picture books and three children's novels. His Sir Kaye the Boy Knight® series of novels for independent readers include The Knighting of Sir Kaye, The Lost Castle Treasure, and Legend of the Forest Beast. Don's picture books include The Higgledy-Piggledy Pigeon; Superhero; Twitch the Squirrel and the Forbidden Bridge; Shelby the Cat; Space Cop Zack, Protector of the Galaxy; and many others.
Don has been writing for over 20 years. After beginning with poetry, Winn moved on to writing children’s picture books. Almost immediately, his growing young readers begged for chapter books, which led to the creation of the Sir Kaye series. As a dyslexic himself, who well knows the challenge of learning to love to read, Winn's goal is to write books that are so engaging they will entice even the most reluctant or struggling reader. Winn lives in Round Rock, Texas.