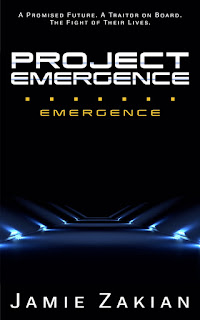 An ancient Hopi myth says people arrived on tiny silver pods that fell from the sky.

But the truth is far more terrifying.

Two-hundred fifty-eight teens are sent from a dying Earth to a terraformed Mars as part of the Emergence Program, mankind’s last hope before solar flares finish off their planet and species. Among the brave pioneers are sixteen-year-old Joey Westen and her twin brother, Jesse.

After only minutes in space, something triggers a total ship lock down.

With the help of their roommates, the Matsuda twins (notorious hackers and shady secret-keepers), Joey and Jesse stumble onto an extremist plot to sabotage the Emergence Program.

But Joey and Jesse didn’t travel to the deepest pits of space and leave their mother behind to be picked off in a high-tech tin can. They’ll lie, hack, ​and ​even kill to survive the voyage and make it to Mars.

EXCERPT:
Joey grabbed her brother’s hand the instant he climbed off the van’s step. People shuffled all around the wide-open room, probably watching her act like a baby, but she couldn’t let go. Fear stole her will. It could have been the towering room of glass walls and silver beams that encompassed her, the barrage of strange faces, or the fact that she’d never see her mother again, but gloom tainted this moment. Holding her brother’s hand quelled a fraction of her inner-turmoil, so she planned to keep doing it despite her sissy appearance.
A soft voice streamed from a kiosk of video screens, repeating the Space Center’s famed slogan.
Three days on the state-of-the-art R23 shuttle, strolling through green grass, swimming in cool oceans.
Everything she memorized from the letter in her backpack.
“Look, there’s check-in,” Jesse said, tugging her from the display of white sandy beaches.
She inched through the crowd, close to his side. They filed into a rowdy line, her palm sweating against his skin.
“The Westen twins, I presume,” a high-pitched voice echoed from behind them.
In one swift move, Joey shook free from Jesse’s grasp and whirled around. An ultra-posh Asian girl leered down, and Joey stood tall. Her eyes wandered to the near identical boy at her side, bearing the same long jet-black hair. Another set of twins.
“How did you know our name?” Jesse asked. Joey nudged his arm, pulling his gaze from the low cut of the girl’s sparkly shirt.
“We know the names of all the twins on this ship,” she said, her hand hoisting to her hip.
“First and last,” the boy added.
Joey stifled a chuckle. Twins who finished each other’s sentences; this trip was going to be stellar. The line shuffled forward, and the small group edged up a few paces.
“How many twins are on this flight?” Jesse asked, glancing between the pair.
“Fourteen, including us,” she replied.
“Well, fourteen sets,” the boy corrected, turning to his sister. “That actually makes twenty-eight twins.”
“But twins is plural, so it would be fourteen,” she argued, a hint of red flaring her cheeks.
“Yeah, but, you knew who we were,” Joey said. “We didn’t even know there were other twins here. Is there, like, a manual we didn’t get or something?” 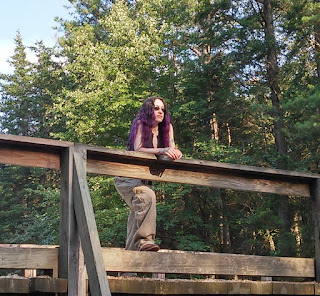 About Jamie: Jamie Zakian is a full-time writer who consumes the written word as equally as oxygen. Living in South Jersey with her husband and rowdy family, she enjoys farming, archery, and blazing new trails on her 4wd quad, when not writing of course. She aspires to one day write at least one novel in every genre of fiction.
|Website | Facebook |
| Twitter | Goodreads |

SCI-FI GIVEAWAY!
1 winner will receive a DVD of Passengers, US Only.
1 winner will win the complete FIRE IN THE WOODS eBook set, International. 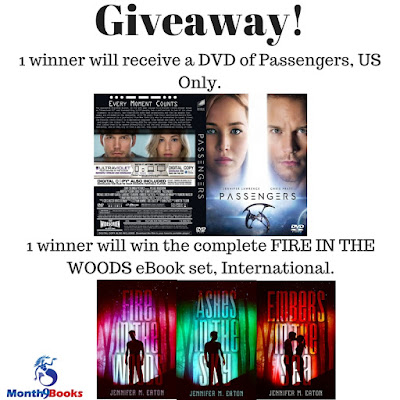