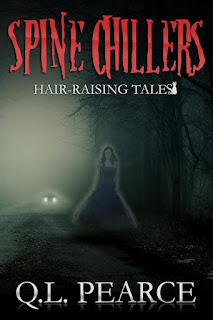 
BLURB: The town of Saltlick Bluff is famous for an urban legend. Does the spirit of a young girl wait on a misty cliff-hugging highway for her ride to the prom?


In the house on Beech Street a terrible tragedy occurred. Now neighbors won’t look at the place as they pass. Those who live nearby draw their blinds and shutter their windows after dark. What are they afraid of?


Hale Hallow Woods seems sinister and menacing even in the light of day. Does a thirst for revenge beat near its dark heart?


The answers lie within these pages, just waiting to send a chill up your spine!

HALL WAYS REVIEW: Author Q.L. Pearce has written lots of books, but Spine Chillers: Hair Raising Tales, Book One, is my first -- but it won't be my last! These seven tales, all contemporary in realistic settings, are satisfyingly spooky with excellent and unexpected twists. And what a fabulous, eerie cover!

Each of the stories has a unique and distinct storyline and its own brand of creepiness. Readers will encounter plenty of paranormal activity but also some of the unseemlier aspects of human nature (including revenge, selfishness, and greed) that heavily contribute to the mood of the stories. The characters behave in realistic ways (with just one exception for me), so readers will likely feel they'd react in the same ways to the situations. Careful readers may catch the surprises, but they may just as easily be misled. Several of the stories have things happening on more than one level.

The writing is good and the voices and dialogue of the characters are natural -- author Q.L. Pearce is a gifted story teller. The book would benefit by further editing, as I did find numerous punctuation errors. It's doubtful most readers would notice them, but especially in books aimed at younger audiences, it's important.

Due to the scare level, I'd recommend this to middle grade audiences, though brave younger readers can definitely handle the writing level. Also, it's an ideal choice for the reluctant reader since the stories and book itself are very short but fully engaging. Sensitive, attentive readers should be aware that one story implies a household with domestic abuse happening.

Thank you to BAM! Literature for providing me a print copy in exchange for my honest review -- the only kind I give.

EXCERPT: The House on Beech Street

Jason stepped inside. The air within was tainted with an odor that made him gag.
“What is that smell?” he asked putting his hand to his face.
“What smell?” Mike responded. Thomas just shrugged his shoulders.
“Do you know the story of the Carlson’s?” The woman didn’t wait for an answer before she continued. “They were a typical family. The little girl, Anisa, took ballet lessons. The boy, Junior, played baseball. Some people said he had the talent to go far as an athlete … that is … if he’d lived.”
The group entered the kitchen. The table was set for five as if the family would be sitting down for breakfast any minute. Jason noticed a pitcher’s mitt on one of the chairs.
“He was a lefty,” he said to no one in particular.
“Mr. Carlson’s mother slept in the spare room. She was an invalid and needed a lot of care. Mr. Carlson and his wife had quarreled about it that fateful morning and he’d left early. When he came home he found his wife in that very chair.” She pointed to the one at the end of the table. “He’d brought her flowers and wanted to apologize. It took him a few moments to realize she was dead. It seems she had taken a handful of sleeping pills with her tea. The police found the rest of the family in the basement along with a cracked, bloody baseball bat.”
“What happened to the dad?” Mike asked.
“They found him two days later hanging from the tree in the backyard. He’d left a note that said he wasn’t alone in the house. The neighbors claimed they heard noises late at night … screaming. You’ll notice that the houses on both sides are now empty. No one wants to live near this place.” She paused and looked in the direction of the front entrance. “Sometimes I can’t wait to leave.”
Motioning for the boys to follow, the woman moved from the kitchen into a dimly lit hallway. She opened the first door on the left. “This was the grandmother’s room.” Jason was hit with a wave of a smell like rotting fish. 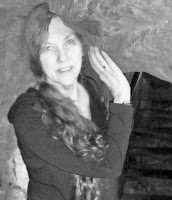 ABOUT THE AUTHOR: Q.L.Pearce is the author of more than 120 books for young readers, from picture books to YA, as well as film tie-in books for the Fox animated film Titan AE and the Universal animated series Land Before Time. Red Bird Sings: The Story of Zitkala Sa (Carolrhoda Books, with co-author and illustrator, Gina Capaldi), received several awards including a Carter G. Woodson Book Award gold medal from NCSS and a Moonbeam Children’s Book Award gold medal. Her fiction includes the popular middle grade series, Scary Stories for Sleep-Overs (Price, Stern, Sloan). Q believes strongly in the value of scary books for young readers. When asked what credentials she has which qualify her as an expert in this area she replies, "I was a child once. That was very scary."  Connect with Q.L.:
LINKEDIN        YOUTUBE     FACEBOOK     WEBSITE
AMAZON AUTHOR PAGE       TWITTER