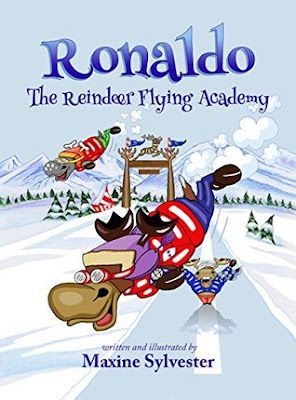 About the book:  Ronaldo is the top flying cadet at the prestigious Reindeer Flying Academy. He dreams of getting his flying license and becoming one of Santa's reindeer, just like his hero, Vixen.

In the first adventure in the Ronaldo series, the second year flying cadets face their toughest ever flying test – The Endurance Challenge. Will Ronaldo be victorious and lift the silver cup? Or will mean brothers Dasher, Comet and Prancer ruin his chance for success?
CLICK TO BUY THE BOOK

Check out Ronaldo's website for the Children's Play Zone with fun activities like drawing, coloring, jokes, magic tricks, puzzles,brain teasers, and even cooking!
WEBSITE
￭￭￭￭￭￭￭￭￭￭￭￭￭￭
HALL WAYS REVIEW: Ronaldo: The Flying Reindeer Academy is a terrific chapter book! I finished reading, looked at my husband, and said, "That was super freakin' cute!" Plus something about those reindeer illustrations absolutely tickled me. I laughed and laughed, and of course, I had to show the pictures around, too.

There's a perfect sprinkling of (did I mention HILARIOUS?) illustrations to provide a break for both reluctant readers and strong independent readers. The illustrations are colorful, clear, and detailed enough to stop and study them -- but readers won't want to stop for long because following Ronaldo's escapades is a blast.  I am so impressed that the author, Maxine Sylvester, is also the illustrator. Such talent!

The messages from reindeer parents to son hold true for humans, too. Cleanliness, hygiene, eating right, courtesy -- all are great messages for young readers. The main message of "Imagine! See it, feel it, believe it," is good advice about having and reaching goals. And there's likely to be some giggling, too, like when Ronaldo's grandad comments on the importance of polishing one's antlers because "no doe could resist a good pair of antlers."

There is plenty of humor in the words and actions (and illustrations) -- including scatological humor – always reliable for kid laughs -- and quirky characters. I loved that grandpa reindeer had "recently retired due to a hip injury caused by years of salsa dancing and, in desperate need of a hobby, chose knitting."

Other characters are entertaining too, like the ever-blushing Rudy, and the highest-ranking officer at the Reindeer Flying Academy, Commander Blitsen, who is female and a bit of a mess, but at least she can laugh at herself.  I did feel that it was a bit of a missed opportunity with Blitsen (as a female in a power position), but hopefully she will be less bumbling and more commanding in the next book in the series. Also, I will be interested to see how the bullying issues are addressed in future books – there was a convenient, but only temporary, solution in The Flying Reindeer Academy.

Other than a few errors that need cleaning up to make it top-notch (run-ons and comma errors), the book was an absolute delight to read, and I would highly recommend it for young chapter book readers.  I am looking forward to the next two installments (The Phantom Carrot Snatcher and Rudi’s Birthday Extravaganza are both already out) and would love to see these books come available in print format. Thank you to the author for providing a digital copy in exchange for my honest opinion -- the only kind I give. 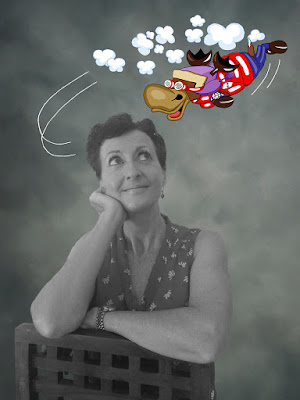 About the author, by the author:  I was born in Hounslow, Middlesex in the south of England. As a child, I loved drawing and took private art classes with a beautiful teacher called, Pearl Lee. She had an abundance of Disney magazines, and I would paint the characters on wood, card, canvas or anything else I was allowed to use, including walls.


After Sixth Form College, I intended to go to art school, but my travel bug got the better of me, and I chose to work as a holiday representative in Greece instead. This was followed by seven years working on cruise ships, two years in Israel and Palestine, and six years in Russia and Armenia. Although I lapped up the different cultures, I found my work over the years very unfulfilling. I decided to dig out my Caran d’Arche pencils, and do something about it!

I enrolled in The College of Cartoon Art and was mentored by the renowned caricaturist, Steve Chadburn. I created a character called Ronaldo and decided to write a short story about him. Before I knew it, my head was spinning with ideas and the first book, The Reindeer Flying Academy, went from a small picture book into a fully blown chapter book … but more importantly, I loved every minute of the writing and illustrating process.

Nowadays, I live in Bali, Indonesia, with my amazing partner, Mark (Bristol born and bred).  I am still a self-confessed Disney geek and get excited as a five-year-old whenever a new Disney animated film comes out. I love the Disney theme parks and have visited Orlando, Paris, Hong Kong, and Tokyo – California and Shanghai are next on my bucket list.
Facebook     Twitter     Instagram     Pinterest     Goodreads